Today, I’m going to share with you a new way to make money off bitcoin.

Here’s the thing. The idea is kind of crazy. For 99% of you, it’s not practical at all.

But for the adventurous traveler, it might be a dream come true.

The strategy is called arbitrage.

That’s where you take advantage of different prices in different places.

For example, let’s say you found a rare book on eBay that you could sell to a local bookstore for $150.

Now, if you can do it with bitcoin, you could consider yourself a bitcoin exporter.

Let me share a story with you so that you understand the opportunity.

A Crisis Leads to Opportunities

When intrepid reporter Frisco d’Anconia finally reached the teller, it was 1:30 in the afternoon.

He had been standing in line since 9:30 in the morning. All to receive a few bucks from a Western Union.

This is not uncommon in Zimbabwe. And it happens across Africa, where 80% of the adult population is unbanked.

Currency instability has been a fact of life in Zimbabwe since the late 1990s. It reached its zenith in November 2008, when inflation peaked at 79.6 billion percent.

In response, Zimbabwe printed a 100-trillion-dollar note. It was worth only 40 cents when it went out of circulation.

Those notes are now collector’s items. 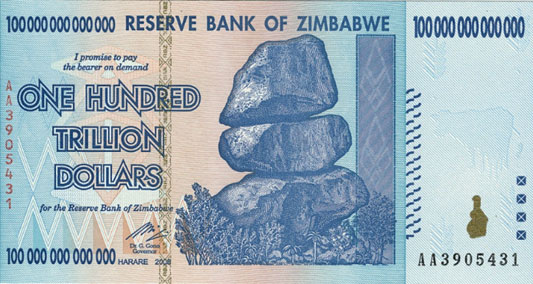 The $100 trillion Zimbabwe note is now a collector’s item

Inflation got so bad that the government ditched the Zimbabwe dollar for the U.S. dollar.

There’s a shortage of U.S. dollars. And that’s causing massive disruption to daily life in Zimbabwe.

Long lines are the norm. Banks limit withdrawals to $100 or even less.

So, it’s no surprise bitcoin has been recently quoted at $10,000 in Zimbabwe. That’s a 78% premium to worldwide prices.

Back to Frisco. As I mentioned, he’s a reporter. And he writes about bitcoin and cryptocurrencies.

And while waiting in line at the Western Union, he took matters into his own hands.

He helped five people set up their own bitcoin wallets… and sold them each bitcoin to get them started.

As a journalist who travels the world, Frisco could have bought the bitcoin anywhere.

And if he bought in the United States, for example, and then sold it in Zimbabwe, he would now be a bitcoin exporter.

And that got me thinking… Why couldn’t someone else do the same?

As I write, you can buy bitcoin for around $5,496 on major bitcoin exchanges around the world.

But on the Golix exchange (formerly BitcoinFundi) in Zimbabwe, bitcoin is selling for $9,200 per coin right now.

That means for every bitcoin you export, there’s the potential to make $3,704.

And you can get a hotel room in Harare for less than $35 per night.

So, your profits would be more than enough to cover the trip expenses.

But it’s not a bad idea if you want to travel the world.

If you go, please write in and let me know about your experience.

Teeka’s giving away a lot of his best training material for free, too. So even if you’re not sure cryptocurrencies are for you, we urge you to sign up just to get all the free material, and see what you think. You can register right here.​

P.S. On November 2, I’ll be joining my colleague Teeka Tiwari during his emergency cryptocurrency briefing.

Teeka’s giving away a lot of his best training material for free, too. So even if you’re not sure cryptocurrencies are for you, I urge you to sign up just to get all the free material, and see what you think. You can register with one click right here.