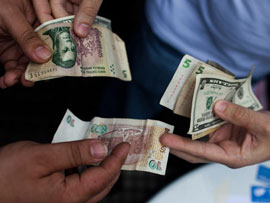 Recently, an interesting video was released that has gone viral in Argentina. It shows the country's top economic official, Hernan Lorenzino, being asked some simple questions on inflation. A sensitive topic for a country that has price and capital controls.

According to independent observers and Argentines themselves, the official government inflation statistics are obviously cooked. It is believed that accurate inflation rates are about double the official numbers.

There is also a wide gap between the “official” exchange rate, which is around 5 pesos per US dollar, and the unofficial black market rate you will get on the street. That is now approaching 10 pesos per dollar, a level nearly double than that of a year ago.

The Economy Minister Lorenzino hilariously dodges the reporter's straightforward questions on these statistics. The conversation is summarized below.

“I have a very simple question for you, which seems very complicated these days: How much is Argentine inflation at this moment?” the female interviewer asked.

“But, how much is it?” insisted the reporter.

Looking increasingly uncomfortable, Mr. Lorenzino said, “I think the cumulative inflation over the last 12 months is 10.2%. I might be off by a decimal.”

The journalist then asks “The IMF in December said that it will impose sanctions for flawed (inflation) statistics that you are giving. What are you going to do about that?”

You can see the video here (starts at 0:47). It is in Spanish and there are no subtitles, though you don't have to speak Spanish to see how uncomfortable he was at the end. The incident quickly went viral on Twitter with the hashtag #MeQuieroIr (I want to leave).

Hernan Lorenzino's counterparts in the US are not that different. They are just more effective liars when it comes to official statistics. Anyone in the US who has been to the grocery store can see the disconnect between the actual inflation rate and the “official” inflation rate.

The whole episode somewhat reminds me of when Ron Paul asked a series of questions on whether gold is in fact money that made Ben Bernanke clearly uncomfortable.

After being repeatedly burned, most Argentines have already learned the lesson not to trust people like Mr. Lorenzino with information that could be relevant in making decisions related to their prosperity.

Americans and anyone else paying attention would be wise to learn this lesson, too. Developing the options to internationalize does not require you to leave your home country immediately, and will help you put your future prosperity back in your hands and out of the hands of crooks like Mr. Lorenzino and Mr. Bernanke.

Lastly, I would like to remind you of the “Best of the Web” section on the International Man website. It contains a veritable treasure trove of resources that are relevant to internationalization and will be updated constantly. If you have a resource that you think we are missing please let us know here.