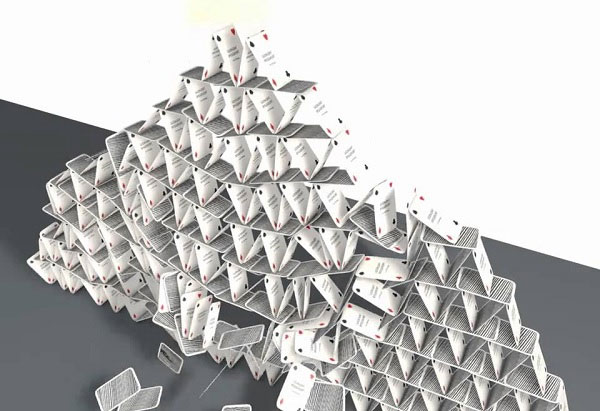 This surprises almost everyone…

You don’t own the money in your bank account.

Once you deposit money at the bank, it’s no longer your property. It’s the bank’s.

What you own is a promise from the bank to repay you. It’s an unsecured liability. Technically, you’re a creditor of the bank. And that means a bank bail-in would probably burn you.

A bail-in is when a bank recapitalizes itself by tapping its creditors. That includes all of its average Joe depositors. Italians are about to find this out the hard way.

The Italian banking system is a mile-high house of cards.

The Italian economy is made up of many small and medium-sized businesses. Those businesses take out loans from Italian banks. But the country’s economy is in a deep and protracted depression. So, many of those loans have either gone bad or will go bad.

This has created a crisis in the Italian banking system. It’s taken years to build up, but the situation is finally coming to a head.

The Italian banking system is insolvent. Shares of most Italian banks have plummeted more than 50% so far this year.

Together, Italian banks hold $400 billion-plus worth of loans that are 90 days past due and unlikely to be repaid in full.

That’s a staggering figure. These nonperforming loans (NPLs) account for more than 18% of all outstanding bank loans in Italy. They add up to over 20% of the Italian GDP.

Here is some sobering perspective: Only 5% of all outstanding loans in France are nonperforming. In the US, it’s 2%. In the UK, it’s a mere 1.5%.

Italy’s NPLs are an enormous problem.

Behind the scenes, European central bankers are preparing for a major crisis—all while promising the public that “everything is under control.”

They know how bad the problem is. That’s why they urgently passed new bail-in rules earlier this year.

The Italian government is in an unenviable conundrum. It can stall and save the banks through a bail-in, or it can let the whole house of cards topple. Either choice is political suicide.

There’s a strong chance it will happen in the coming weeks.

The impending failure of Italy’s third-largest bank, Banca Monte dei Paschi di Siena (BMPS), will likely be the spark that sets it off.

Founded in 1472, BMPS is the oldest bank in the world. With one of the highest ratios of NPLs, it’s in far worse shape than any other Italian bank.

BMPS has also become the world’s most infamous penny stock. Over the past 10 years, its stock price has collapsed more than 99%.

This bank has survived everything since before Columbus landed in America. Now it’s about to fail. That should tell you just how unsound modern banking is.

The only reason BMPS is still giving off the faintest death rattle is because Italian taxpayers have already bailed it out… twice.

Of course, neither bailout worked. They were like Band-Aids on a gunshot wound. The bailouts didn’t address the fundamental problem of economic stagnation, and BMPS quickly bled through the bandages.

Then, after BMPS’s stock crashed 20% in one day this summer, the Italian government banned short selling of the bank’s shares. It hasn’t helped. Since the ban went into effect, shares have fallen more than 45% anyway.

Now BMPS is in the middle of a third rescue attempt. It’s trying to raise $5.5 billion in fresh capital from a syndicate of private investors.

At the time of writing, BMPS’s current market cap is around $550 million—about 10% of the $5.5 billion it needs to raise to stay afloat. After BMPS raised $9 billion in recent years, only to have it vanish as its share price collapsed, no sane private investor would throw another penny down this black hole.

Needless to say, the capital-raising effort is not going well. The syndicate was supposed to announce the results in September, but it decided to delay.

I think the implications are clear: BMPS has not raised anything close to $5.5 billion. The Italian government just doesn’t want people to notice.

If the syndicate admits that its capital-raising efforts have failed, then there’s only one way to keep BMPS and the entire Italian banking system from collapsing… a bail-in.

It’s only effective if it’s a surprise.

Whenever you hear a central banker or a politician say something won’t happen, you can almost be certain it will happen—and probably soon.

The Italian minister of economy and finance recently made revealing comments about BMPS’s capital-raising efforts: “I am absolutely confident it will work.”

The minister was basically denying, although not very convincingly, that BMPS will need a bail-in. Coming from a bureaucrat, the real meaning of “No, of course not” is “It could happen tomorrow.”

It’s like the old saying: “Believe nothing until it has been officially denied.”

These deceptions have a purpose: Politicians and central bankers have to surprise the public to get the results they want. It happens over and over again.

The same pattern played out in Cyprus during the country’s 2013 banking crisis. On an otherwise ordinary Saturday, the government declared a surprise bank holiday. Then, despite repeated promises from the highest Cypriot politicians that bank deposits would be safe, it imposed capital controls and confiscated bank deposits through a bail-in.

The crisis hit the front pages of newspapers, and Cyprus’s stock market imploded. At one point, the Cyprus Stock Exchange was down 98% from the all-time high it set in 2007.

Cyprus was radioactive. Nobody wanted to touch it. Foreign and local investors fled.

It was time to start looking for bargains.

Fear and uncertainty created a remarkable opportunity to pick up solid stocks at bargain prices. This is exactly why Doug Casey and I travelled to Cyprus. Shortly after we landed, we were in a private meeting with the CEO of Cyprus’s stock exchange.

Despite the crisis, Cyprus still had sound, productive, and well-run businesses. These companies—which Doug and I visited in person—were still making money and paying dividends.

Many of these companies had been around for decades and survived much bigger problems, including an invasion by the Turkish Army in the 1970s. The country’s financial crisis wasn’t going to destroy them.

Here are a few examples of what we found:

•  A company that operates luxurious beachfront properties. We locked in a 214% gain.

•  An international technology company that operates in Europe, Asia, and the Middle East. This well-run business remained profitable and paid dividends consistently, even during the worst of the Cypriot crisis. We locked in a 172% gain.

•  A bulb and lighting-fixture company that exports its products to 30 countries. We locked in a 97% gain.

Looking back, investing in Cyprus after the 2013 crisis sounds like a no-brainer. Today it’s public knowledge that billionaires like Wilbur Ross and Daniel Loeb scooped up trophy assets in Cyprus just as Doug and I recommended our subscribers do the same.

Yet, at the time, the average investor wouldn’t touch Cyprus with a 10-foot pole. That’s a key part of Crisis Investing… you have to be willing to do what others won’t.

Looking ahead, an Italian banking crisis could produce some outstanding bargains, similar to what we found in Cyprus post-bail-in. But you’ll have to know where to look.

I recently spent several weeks in Italy. And I can tell you firsthand that this is exactly the kind of crisis New York Times best-selling author Doug Casey and I travel the world looking for.

Doug and I just released an urgent video explaining what will happen to Italy, the entire European Union, and stock markets around the world when this house of cards crumbles. Click here to watch it now.