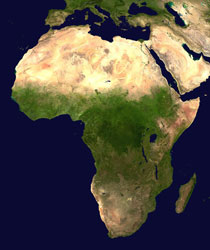 I’ve written various earlier pieces on market selection criteria.  You can read those here & here for more background.  Today let’s stipulate that your product has (or could easily have) broad applicability for developed and developing markets; is unencumbered by any export or import restrictions; and can be efficiently “localized” to satisfy local market preferences.  In other words, you are free to go where compelling opportunity beckons and risks can be reasonably mitigated.

So where are we headed?  Africa.

I understand that it may not be as enticing as sipping “big, round reds” in Argentina, nor as urbane as attending a semi-annual BoD meeting of your European subsidiary.  And naturally any strategic international business development initiative will include an appropriately diverse selection of markets across multiple continents – not simply a headlong dash to a continent with endemic challenges.  But as (nearly) green field opportunities with enormous potential go, Africa looks like a winner.

Africa by the numbers

Africa is a continent.  Of course, you say.  But its enormity is best appreciated through some stats.

Similarly, indicators of its potential need to be quantified.

Intellectually intriguing but overwhelming?  Fair enough.  Let’s narrow it down.  Based on demographic trends, the consumption growth opportunity (after all, whether your product is direct B2C or several steps removed, consumption growth drives most of the opportunity) is generally ubiquitous throughout Africa.

But political risk in much of North, and large swaths of Sub-Saharan Africa make those regions somewhat problematic.  Is there money to be made and opportunity?  Certainly, but at least you need to hedge your exposures assiduously (OPIC may be the best option), and further consider whether the resources that would be committed there might not be better deployed in the vibrant and dynamic West African (ECOWAS – Economic Community of West African States) region.

South Africa (the country – not the southern African region) offers a relatively comfortable continental entry point.  And it beckons with the promise of reasonable growth and opportunity, and relative stability.  But it’s not a new story.

In contrast, West Africa offers bold businesses an early-mover opportunity akin to our American “land grab.”  The rules haven’t been written yet, and the next several years will likely see changes similar to what India and China experienced during the decade from 1995 to 2005.  For those who crave granularity, much of the opportunity can be further focused in Ghana and Nigeria.

These two markets, ironically the only two with an Anglophile tradition amidst a region with predominantly Francophile roots, represent both the continent’s fastest growing economy and the fastest growing population respectively.   They are markets craving an evolution in lifestyle and coveting American products, which carry a certain cachet.

Certainly crime is a concern, and corruption is endemic.  (Any company entering Africa must have a formal FCPA compliance program in place.)  Political risk is a reality and religious-based terrorism has made Boko-Haram widely recognized.  Any unvarnished assessment must account for these challenges.

But the opportunity to participate in markets as they emerge, rather than once they have done so, is a tremendously exciting business opportunity – and potentially as lucrative as exciting.  The window is closing however.  Chinese pursuit of natural resources brought them to Africa, and they now remain in pursuit of commercial opportunity.  And European companies, particularly the inveterate exporters from Germany, have proactively begun to cultivate the markets.

The nudge you may need

Not sure if it’s the right time?  The US government is throwing its substantial bulk behind any efforts in these markets.  While that influence may wane in the future, it provides a helpful tailwind today – and Uncle Sam has announced its determination to support American export growth to Africa.

Demographically it’s compelling; early movers can help to write the rules; and the USG is going to help you along.

It’s certainly worth taking a close look at the potential for your business in Africa.  And next month we’ll take a look at the impact of your African expansion, and global business strategy, on your enterprise valuation.

About Ed Marsh –
Ed Marsh is an international business entrepreneur.  Having founded, run and built businesses in several countries. he intuitively understands the potential and pitfalls of global business development.  He assists American SMBs in formulating and executing global business strategies. Website link is www.ConsiliumGlobalBusinessAdvisors.com

Few people travel to Africa. If they do, it’s with a guided tour to Morocco or Egypt.

From the perspective of an American company, what markets provide particularly compelling opportunities today?