“In this world nothing can be said to be certain, except death and taxes.”
–Benjamin Franklin

You are technically a slave when 100% of the fruits of your labor is taxed or otherwise confiscated by force. So, at what percentage are you not a slave?

When you consider the totality of the countless direct and indirect taxes on the local, state, and federal levels, as well as the pernicious effects of inflation, the hidden tax, many of us are at least halfway to 100%.

It is no mystery, then, why growing numbers of individuals and businesses seek ways to legally reduce this suffocating burden through structuring their affairs in low-tax jurisdictions.

Lately, with all the so-called “controversy” blaring from the media about low-tax jurisdictions (aka tax havens), and politicians piling on the wagon to denounce them, it’s no surprise that most Americans harbor the false impression that they are only for the super rich, or multinational corporations, or those engaged in illegal activity.

That is a misconception, however; tax havens offer a number of legitimate and completely legal functions that even Americans of modest means can advantageously employ.

Uh, About Those Taxes, Mr. Franklin…

In most instances, Mr. Franklin’s observation quoted above would be correct, certainly for American citizens and legal residents. However, for Americans who earn income in certain jurisdictions and meet qualifying IRS requirements, it is possible to prove Ben wrong.

First, note that the US, unlike the rest of the developed world, is the only country that enforces a system of citizenship-based taxation. This means that Americans are taxed on their worldwide income by virtue of their citizenship without regard to their country of residence. For example, an American expat who is a legal resident of and working in Switzerland, must file and pay taxes to both the US and Switzerland for income earned in Switzerland (the IRS allows credit for foreign taxes against your US tax obligation, but you might still end up paying taxes to two governments).

In contrast, the rest of the developed world practices a system of residence-based taxation. Under this system, you are only required to file and pay taxes in the country where you are a legal tax resident.

In short, American citizens and green card holders cannot escape the burden of filing and paying taxes to the US government, no matter where on earth they live or earn income. It is a unique burden that no other developed country places on its citizens.

An unfortunate example of American exceptionalism, I suppose…

There is a silver lining, however, and that is the Foreign Earned Income Exclusion (FEIE).

What is it and how does it work?

If you qualify for the FEIE you can exclude a not-insignificant amount of foreign earnings from your US taxable income. This amount is adjusted annually for inflation and is set at US$97,600 for 2013.

To qualify for the FEIE, you must have foreign earned income and be either:

Additionally, your tax home must be in a foreign country throughout the period. The IRS defines “tax home” as “the general area of your main place of business, employment, or post of duty, regardless of where you maintain your family home. Your tax home is the place where you are permanently or indefinitely engaged to work as an employee or self-employed individual.”

While the physical presence criterion (#2 above) is pretty straightforward, the “bona fide resident” test is less so. Basically, you must prove that you have established roots and a permanent presence in a foreign country. Without getting into too much legal jargon, TurboTax walks you through this process step-by-step and determines if you qualify for the FEIE or not. It is actually fairly simple to determine in most cases. Consult a tax professional if individual circumstances are more complex.

So, assuming that you qualify for the FEIE, you can exclude up to US$97,600 of your foreign earned income (for 2013) from your US taxable income. Keep in mind that the FEIE only reduces your US taxable income; you still have a tax liability to the country in which you reside and earned the foreign income.

That is unless you earn your income in one of these 18 countries that have no personal income tax: 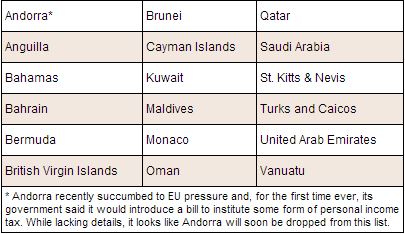 Ben Was Only Half Right

The key here is to have a portable job or the ability to transplant yourself and your business to one of these 18 countries. This strategy is particularly well-suited for businesses or professions dealing with intellectual property, writers (freelance or otherwise), Internet publishing, skills that are needed in one of those countries (like engineers and medical professionals), or an income stream that can be moved across borders easily.

Through qualifying for the FEIE and utilizing the 18 countries above, Americans are able to legally prove Benjamin Franklin was only half right; taxes are not necessarily inevitable… well, at least on the first US$97,600 of foreign earned income.

Fortunately, it is still legal to take steps like this to internationalize yourself and reap the benefits of diversifying your political risk. However, if history is any guide, the window will not be open forever. Especially as governments (particularly in the West) become increasingly desperate as their fiscal situations continue to deteriorate. These are the kinds of topics we specialize in and cover in our Going Global publication.