“In this world nothing can be said to be certain, except death and taxes.”

In most cases Mr. Franklin's statement would be correct. However as you will see below, there are some countries in the world where you can be certain you won't pay taxes.

With the year 2013 marking the 100th anniversary of the income tax and the Federal Reserve in the US (two of the most powerful tools the government uses to extract wealth), I thought it would be useful to look at when Tax Freedom Day occurs across the world to gain some perspective.

Tax Freedom Day (TFD) is the day of the year that the average person has in theory earned enough money to pay their annual tax bill.

If TFD falls on January 1st that means you are a milk cow for ZERO days out of the year for the government. If it falls on June 30th it means you are working 181 days each year to pay off your taxes.

Unfortunately most of us will spend some time during the year acting as a milk cow in some fashion for a government.

Below is a table showing when TFD hits in the countries within the EU.

The government of Hungary, Belgium, and France are the worst offenders in the EU, keeping their citizens in tax servitude astoundingly until around August each year. 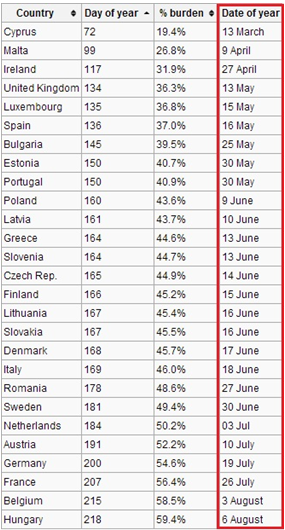 If you are unlucky enough to be in the suffocating grasp of a high-tax jurisdiction you will likely have only a couple of months of salary (if even that) out of the year that can be potentially utilized as savings after essential living expenses are met.

In the US, TFD comes around April 17th. Of course individual circumstances will vary and TFD in the US can come a lot later than April 17th for many Americans.

Whether you are American, European, or any other nationality, it doesn’t have to be this way. You do not need to be working for the government for a good portion of the year.

It is possible to take steps to internationalize and legally reduce the number of days the government milks you of the fruits of your labor.

Some countries do not have an income tax, or essentially any other type of tax that could hit the average individual.

TFD could come on January 1st for you if you have no external obligations and fall under the jurisdiction in any of the countries in the table below.

There are many ways to internationalize and legally structure yourself and your business around these and other low-tax countries.

One possibility could involve an American citizen obtaining a second citizenship, then becoming a resident of one of the countries above, and finally renouncing US citizenship in order to obtain a tax-free existence. Of course this is but one possibility. There are many options with varying degrees of protection.

You could prove Benjamin Franklin wrong – taxes are not necessarily a certainty.

International Man is here to help you develop and implement the options to internationalize – yourself, your savings, and your income. Internationalizing helps reduce your political risk and dependency on any particular government. It makes it harder for any government to treat you like a milk cow.

It is still legal and practical to take steps to internationalize, but if history is any guide it won’t be so forever. Especially as governments (particularly in the West) become more desperate.

We have recently published Going Global in order to help you do exactly that. It's full of up-to-date and actionable advice from renowned experts on the best countries to consider for international gold storage… opening foreign bank accounts and IRAs… second passports and foreign real estate… the best foreign currencies to invest in…. and much, much more. Simply put, there's no better resource available on international diversification than Going Global. Click here to learn more.