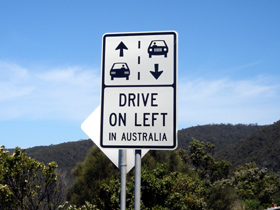 Two isolated, feisty countries, with a shared heritage that squabble like siblings. Spend a bit of time in either country and you'll hear a litany of jokes disparaging the other. The bigger one picks on the smaller one, and the smaller one gives as good as it gets. Suggesting to a local that the two have anything in common will provoke outrage, but what do the differences actually mean?

It's a tough life in the sunburnt country: space aplenty, abundant natural resources, pubs with enormous beer gardens and an almost nationwide addiction to coffee, seafood, global cuisine and sports. As some say, “Where else can you win the lottery twice?”

It's the country of the “fair go” and the Australian economic miracle. Since the late 1990s, a fortuitous combination of precious rocks and dirt, attractive tourist destinations and a housing boom created significant wealth for a country that is used to being an underdog on the world stage. While the rest of the world was enduring chaos and tumult in 2008-09, Australians were lolling in the surf and downing local wines.

This prosperity comes at a price, of course: Australia is now high-income, high-cost and high-tax. In 2010 the AUD broke parity with the USD for the first time as a freely traded currency, and it's still trading above historical levels. As a result, the cost of living in Sydney is now 50% more than in New York, whereas a decade ago Sydney was 25% cheaper than New York. Melbourne was recently crowned the world's most liveable city, but it's also the eighth most expensive city in the world. Restaurants, clothes, beer – any typical household purchase – will almost certainly cost more than you're used to if your starting point is the USA or the UK. Two years ago I visited Broken Hill, an isolated mining town in the New South Wales outback, and was stunned to pay Sydney prices: $4.50 for a small latte.

While the Australian economy has weathered the storms of recent years, it's possible there has been too much self-congratulating and piling on of public and private debt. A growing movement is forecasting a housing bubble burst; high costs are encouraging other countries and companies to look elsewhere; and Australia's dependence on resource exports to China could be a case of too many eggs in one basket.

Visitors seeking the perpetual sun-and-fun stereotype will be amply rewarded, but Australia can also be wild, raging and fearsome. It's possible to have blazing bushfires in Victoria, cyclones and floods in Queensland, and unabating drought in the middle – all at the same time. Add to that the occasional croc attack (for which Obama was jokingly insured during his 2011 visit), and you begin to see that Australia is not for the faint of heart. The early settlers that survived – convicts and gold-rush-era fortune-seekers – must have been a hardy lot.

There is a range of options available to those seeking to live temporarily or to migrate permanently to Australia. Broad categories include:

An island country in the southwestern Pacific that's geographically remote from everywhere except Australia and Antarctica, it's believed NZ was the last major landmass settled by humans. It is a gobsmackingly beautiful natural paradise with productive land, reliable rainfall, and just over four million people in an area smaller than California. Whereas Australia has crocodiles, cyclones and arid land, NZ is green, clean and fertile.

In New Zealand, all dairy products must be free of antibiotics, chemical residues and hormones. As sports-obsessed as its rival neighbor, it's also the country that started bungee jumping and it boasts exquisite Sauvignon Blancs. Australia might have a chip on its shoulder, but New Zealanders just want you to have a really, really good time.

And yet there is little self-congratulating to be heard in NZ. Perhaps that's because wages are lower and cost of living is still high. It's a small, remote country with fewer professional opportunities compared to its bigger sister or England, the colonial mothership. NZ has suffered from a brain drain – in 2005, the OECD reported that one quarter of New Zealanders with higher education were living overseas – but it has also benefited from a brain gain of qualified foreigners seeking a quieter life. Recent earthquakes in Christchurch have depressed tourism and encouraged more New Zealanders to move, but it's also created job opportunities for skilled workers who can help the city rebuild.

In any natural paradise, there is a sobering reality to consider: the country's stunning glaciers are melting at an alarming rate; waterways are threatened by runoff produced by the cows that supply a quarter of the country's exports; and the controversial practice of fracking for natural gas and oil has begun.

Categories of visas are similar to those for Australia, with a carve-out for horticulture and viticulture (translation: seasonal work picking fruit). NZ was at one time considered a “backdoor” to Australia, which might have contributed to a 2005 decision to extend the time required to obtain citizenship (now a minimum of five years).

Where to from Here?

While boots-on-the-ground experience might expose more differences than similarities, when viewed with a global lens, the two have more in common than they are willing to admit.

If you're landing in either country from a major metropolis, your first reaction is likely to be, “Where is everyone?” For a period of time, you might feel you have quite literally fallen off the map. Both countries suffer the tyranny of distance, but you can enjoy the amenities of an urban lifestyle with less crowding.

They also both receive 'nanny state' critique: police forces can feel big brotherly, there are strict gun laws in place and television advertising is not subtle. The upsides are that both countries are relatively safe and things generally run as they should.

If you're deciding which country might be for you, consider that you'll realize an improvement in quality of life only if this is the life that you want. Sun, fun and clean air are meaningless if what's really important is raising your children near their grandparents or the comfort of hearing your own accent. Yes, the emotional cost of leaving home is lighter than it's ever been, thanks to increased mobility and fast communications, but with a twenty-four hour plane journey and thousands of dollars in airfare, you probably won't get a lot of visitors.

But the early settlers had it harder than we do now, and plucky adventure-seekers should not be deterred. Whether you're a greenie looking for a quiet place to grow vegetables, career-driven and seeking to diversify, or a retiree who wants a serene place to spend your golden years, Australasia has something for you.

Editor’s Note: Things can change quickly. New options emerge, while others disappear. This is why it's so important to have the most up-to-date and accurate information possible. That's where International Man comes in. Be sure to get the free IM Communiqué to keep up with the latest on the best international diversification opportunities.