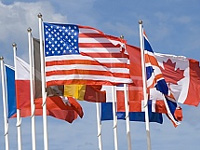 Chris Hess has experienced a life not too many of us can imagine… as a commissioned officer in the U.S. Air Force. Traveling around the world working for Uncle Sam.

But he has also been someone who has taken the message of internationalization to heart. It's one available to so many “military men” and yet remains the road less travelled – even though they are some of the first ones to see the negative effects of U.S. policy, not to mention how the world “really is” vs. how the biased mainstream media presents it to be.

Chris will attempt to explain. And in doing so, will share some illuminating insights into the military mind.

In his own words, “… this is not a scientific study and/or examination of the military psyche, but merely an educated analysis based on the recent perspectives and observations of a former U.S. Air Force officer.”

The U.S. currently has military operations in many parts of the world, and its influence extends to many millions of individuals. As the author points out, this organization employs a variety of strategies to exert that influence, one of which he calls “institutional chilling”, which in this context means the “creation of circumstances that strongly dissuade people from engaging in an activity.”

So, the question becomes…

Can a Military Man Become an International Man?

An illuminating observation relating to the international lifestyle is the seeming lack of American military personnel who choose to internationalize. At first glance, that might seem odd. After all, many individuals in this line of work have extensive international experience attained via postings abroad and one would think such exposure would make them experts at expatriation.

As a former officer, I contemplated this subject as my wife and I prepared to implement the final stages of our personal “internationalization project” earlier this year. Aside from the common reasons (family ties, patriotism, money, etc.) why many people in general do not diversify themselves internationally, I believe that socio-cultural factors, task saturation (too many work tasks), and institutional “chilling” (deterrence) of foreign exposure help to explain why more military do not diversify.

The Socio-Cultural Environment of the Military

As one may imagine, the socio-cultural environment of the U.S. military as an institution is one that instills conformity and is distrustful of individuals who think independently or differently. One could delve ad nauseum into a sociological discussion of military conformity and conventional thinking, but critical to our discussion here are the subtle — yet incessant — messages to those in the military to dissuade them from moving on to other life pursuits.

During my time as a junior officer with the USAF, I observed the birth of the “Air Force Family” slogans and the implied emotions that the Air Force as an institution hoped the airmen would adopt. The message is brilliantly simple: the USAF is your family and only selfish malcontents would willingly choose to leave their family.

International men and women, on the other hand, tend to be emotionally mature adults who realize that those who truly love them and are looking out for their best interests are not going to use crass manipulation to influence their decision to expatriate. The military, in essence, uses crafted forms of manipulation — in this case the manipulation of peoples' emotional attachment to familial bonds — to keep them from pursuing internationalization.

Task saturation at work prevents people in the military from contemplating the direct connection between their personal experience and reasons to internationalize, such as the fiscal bankruptcy of the U.S. government. I personally believe that such task saturation is both a matter of circumstance and is a purposefully crafted psyop (operation to influence peoples' thoughts) to keep the masses distracted and from forming independent thoughts.

The circumstances of task saturation are fairly straightforward. The Air Force has dramatically reduced manpower without reducing the number of tasks that need to be undertaken, hence people — especially those in middle management — are extremely busy and simply lack time to reflect.

I believe that the Air Force also uses programs such as the Air Force Ball, Earth Day 5k runs, and “Tops in Blue” entertainment shows, in addition to incessant uniform changes and sexual assault cases, as crafted psyops to misdirect collective thoughts away from non-military concerns. Certain distractions, such as sports, are permitted, and the military provides pre-taped and pre-screened entertainment and news programs via American Forces Network satellite programming.

A number of Americans and Westerners are expatriating due to their analysis of the upcoming monetary breakdown of the West and the likely social and political turmoil that will entail. People in the military are simply too busy and distracted to pause for a few moments to see the forest for the trees. Hence they miss the opportunity to use their overseas experiences to secure a bolthole for escape.

The corporate military actively engages in the chilling of private, off-duty efforts by military members to garner street-level foreign exposure on their own initiative. Most of the military undergoes a security clearance background investigation of some sort. During the course of an investigation, individuals must divulge the ownership of offshore or foreign financial accounts, property, foreign contacts, etc. Most affiliated with the military are uncomfortable divulging such information to a note-taking investigator, not to mention that this may result in having a clearance delayed or denied, hence negatively impacting a career. It is easier to not open a foreign bank account.

In addition to this, the American military implements abounding bureaucracy, paperwork, and administrative procedures that dissuade people from engaging in foreign exposure. I was always aggravated when having to obtain an approved “Anti-Terrorism and Force Protection” plan every single time that I engaged in a foreign fact-finding excursion.

As if this is not bad or insulting enough, the U.S. military in Korea and elsewhere actually requires military personnel to obtain written permission from a commanding officer prior to marrying a “foreign [sic] spouse” — or face punitive legal action! Legal age, consenting adults have to submit to a 10-step, months-long process for permission, from an unrelated individual.

The result of such policies is the chilling of private opportunities for people in the military to educate themselves through firsthand exposure to foreign banking, culture, and investment. Individuals who are engaged in successful internationalization programs tend to be freedom-seekers who have done their homework via on the ground field experience abroad. Military apparatchiks enact bureaucratic impediments that treat the world as “enemy territory,” hence making this more difficult for those tied to the American military.

At first glance it is somewhat counterintuitive that more people working within the military do not engage in a personal internationalization project. As you can see, the situation is somewhat more complex than at first glance but is logical in light of the heavily controlled environment of the military.

One of the main objectives of a commander is to ensure that his subordinates are not distracted by anything that could negatively impact unit morale and “the mission”. Concerns about an international monetary collapse and the impact of a collapse, such as not receiving a paycheck, are extremely detrimental to morale and related discussions are frowned upon.

It is my view that the American military's increasing lack of tolerance for independent thought and private action prevents people from exploring international options. As a result, it is the rare “military man” who, in fact, becomes an “international man.”