As a general rule, I don’t pay much attention to the talking heads on the news networks nor the politicians who argue with each other about who can better butter-up the voters – if I want to see chimpanzees screaming at each other, I can go to the zoo.

However, there is occasionally a time when they are of some use… and that is when you need to get a sense of what the general population spends their time thinking about. Nowadays, that seems to be some generalized sense of worry followed by a “we need those guys in government to do something about it”.

Nowhere is this truer than when it comes to economic issues. The average person has no clue what’s going on… and they don’t really have any desire to learn. Rather, they prefer to believe their leaders will come up with a solution that will keep the good times rolling. And amazingly, they do believe that everything is, or will soon be, alright.

They don’t want to hear about “recessions”, “depressions”, or “crashes”. They would just as soon hope, contrary to what their eyes show them, that everything is golden; that there is no depression and the crash happened in 2008 – not something yet to come.

But hoping doesn’t make it so.

Can a financial crash in the US be avoided? Not likely, as Jeff Thomas explains…

Can the Financial Crash in the US be Avoided?

In 1999, following the repeal of part of the Glass Steagall Act, it became clear to me that the US stage was set for another Great Depression. I wasn’t too sure when it would kick in, but I guessed between five and ten years. I assumed that there would be a housing crash, which would be followed by a stock market crash, probably within a year. Then the government would step in and offer a bailout in some form, so that the financial institutions who were largely responsible for the mess would be able to continue to profit from the debacle.

I assumed that it would be a depression, not a recession, as the level of debt in the US was already absurdly high, and whatever level of debt was incurred to bail out the banks would exacerbate the situation. I assumed that government spending would also increase, as, when a financial crunch occurs, governments tend to increase the role of government (and therefore the cost of government.) However, I confess that I didn’t anticipate the level of expenditure under the Bush and Obama administrations.

Based upon Elliott Wave Theory (which I recommend to all readers to be used as a factor in understanding the nature of economic change), I made a tentative assumption that the bailouts would cause an apparent recovery for two or three years. Following that, the bailouts would, at some point, end, and subsequently the second crash of the depression would occur – a deeper and longer downward curve. I further projected that this would serve as the blow that would convince all and sundry that this really was a depression – not a recession (double-dip or otherwise). This would signal the collapse of the other dominoes and usher in a period of hyperinflation.

Around 2007, I began to speculate as to when the second crash would come. I concluded that it might come as soon as 2010, if the bailouts were of brief duration, or, more likely, 2011, if they were extensive.

I stuck to the latter date until early in 2011, when I began to question whether that would be the year. By that time, QE2 was underway, due to come to completion in mid-year. That put my prediction right on target, but I had a nagging suspicion that, as destructive as it would be for the US government to go beyond QE2, the temptation to do QE3 (under that name or some euphemism) just might give them the hope that they could put off the second crash until after the November 2012 election. But, would they be so irresponsible as to instil the level of damage to the country that a third round of QE would cause, just to assure the retention of political control?

It is perennially difficult for us to accept, but politicians (not just in America, but in virtually all countries) focus their attention on their own retention and increase in power, to the exclusion of all other considerations. “For the good of the country” is a phrase that they use publicly for most of their machinations; yet, this is almost never a true concern.

At this point, most people with whom I converse, including Americans, seem to believe that the worst is yet to come and that the First World needs to prepare itself for a long economic winter. If I am correct, in spite of that general mood, the second crash (and the other dominoes that will follow it) will be far in excess of what most people are expecting. While the crash itself may wipe out the savings of millions of investors, large and small, perhaps more damaging will be the inevitable hyperinflation, which will serve to lower the standard of living of all but the very wealthy.

I have not been alone in my belief; however, those who share my view tend to be those who have spent as much or more time in the study of the economy and are unquestionably not mainstream prognosticators.

Recently, I received a report from John Williams of Government Shadow Statistics, stating that the present deficit, plus the unfunded liabilities for Social Security, Medicare, etc., plus possible accounting changes such as the handling of Fannie Mae and Freddie Mac, indicates that the GAAP-based federal deficit for fiscal 2011 is likely in the range of five- to seven-trillion dollars. He then states:

That would put the ratio of gross U.S. government debt and obligations to GDP closing in on six-to-one, the worst of any major Western power…

After receiving this from John, I then received (from an associate) a copy of a report from Dylan Grice of ZeroHedge:

The point I’m trying to emphasize is that the relationship between the debasement of the coinage and price levels is non-linear. A monetary system can be abused for a long period, but not indefinitely. A tipping point is reached when CONFIDENCE in the value of the currency collapses, leading to a surge in inflation – hyperinflation in this case.

The corollary with today’s financial system is that the quantity theory of money is not linear either. However, the abuses are piling up in obscene fashion and we are approaching the tipping point. Today the “path of runaway inflation and fiscal irresponsibility” incorporates all manner of abuses like trillion dollar deficits, bank bailouts, near zero interest rates and Q1, QE2…! 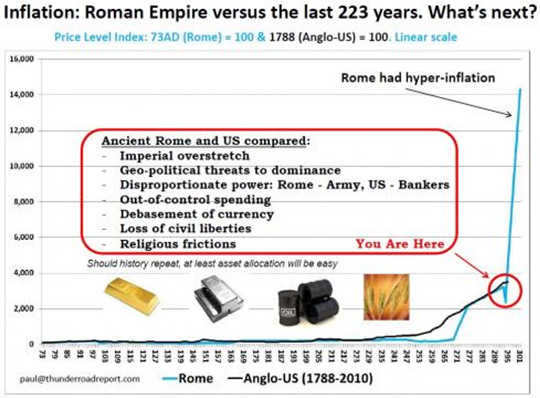 What does all this tell us?

First, it tells us that, if I am deluded in my predictions, I am in good company.

Second, it tells us that if I am correct, we have nearly reached the breaking point. The above forecasters share the general perception that we are presently ramping up for hyperinflation. It may be precipitated by a second crash in the stock market, or any of several other triggers, such as a crash in the paper gold market, creditors dumping US debt back into the US market, and, of course, the certainty of default by one or more EU countries.

Still, most Americans haven’t truly felt the seriousness of this yet. Many actually state that, based on the dictionary definition of a recession, the US is actually in a recovery.

How do we explain this situation in a simple way to those who may be scratching their heads at the above information? I have heard many analogies (and have offered several of my own) over the last year or so, but the most descriptive I have heard has been by Doug Casey of Casey Research. He has repeatedly stated that the US (and the First World in general) is in a state similar to the eye of a hurricane.

For anyone who (like me) has actually had this experience, Doug’s analogy is spot-on. When a hurricane first hits, there is wind and rain, which increases as the eye approaches. Then, suddenly, the eye passes directly over and there is sudden calm. However, it doesn’t come as a relief. The stillness is eerie and carries a feeling of foreboding with it. Some people come out of their shelters and say, “Is that it; is it over?”, but clearly they don’t believe that it is over at all. Then the second wall of the hurricane comes, and it comes with a vengeance unlike the first.

We are now in the eye of a category five economic hurricane – something that almost no one alive has ever seen before.

The title of this article asks the question, “Can a financial crash in the US be avoided?” The answer is an emphatic, “NO.” No Obama jobs programme, no QE3, named or otherwise, will stop the inevitable storm. It is not a possible new storm (double-dip recession). It is the completion of an existing storm, and all the pontificating and squabbling amongst the politicians on both sides of the aisle amount to no more than rearranging the deck chairs on the Titanic.

Watching the evening news and hoping that one of the candidates for presidency may have the magic wand will not make the storm go away. There can be only one successful course of action for readers in dealing with the reality that is about to face them: Don’t wait for it – prepare now.