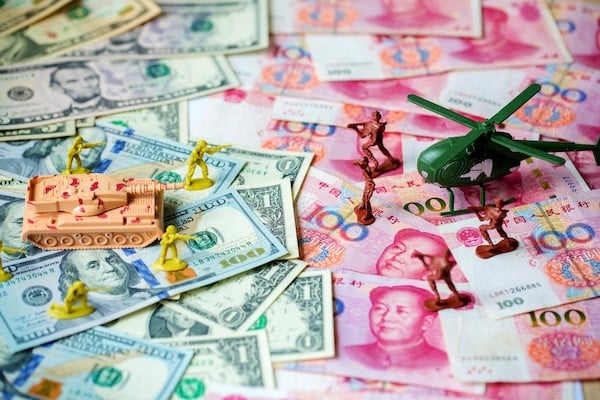 “We’re going to war in the South China Sea… There’s no doubt about that.”

Steve Bannon – previously one of President Trump’s closest political advisers – said these words shortly after Trump became president. He was referring to military conflict between China and the US… one that would likely be the biggest war since WWII.

While these words might seem like hyperbole to many, they touch on something important… arguably the biggest story for the next generation.

Watching the mainstream media circus covering Trump and China gives the impression that once the two sides reach a trade agreement, it will be back to business as usual. But that view completely misses the Big Picture…

The trade war between the US and China was always just a sideshow of a much bigger issue: Who will be the world’s dominant power?

It will be China, or it will be the US.

It can’t be both.

Could the US ever accept being No. 2? We won’t have to wait long to find out.

That’s because China is on the path to having double the US’ GDP by 2030.

The situation will soon reach a tipping point.

The US finds itself in the same position that previous established powers did as they were challenged by rising powers. Many of these countries found it preferable to strike while the rising power was still relatively weak, as they had a greater chance of prevailing than if they waited.

This dynamic is called “Thucydides’ Trap.” It’s named after the Athenian historian Thucydides, who observed this dynamic in Ancient Greece.

Graham Allison, a professor at Harvard, has studied 16 cases of Thucydides’ Trap throughout history. In 12 of them – 75% of the time – the result was war.

War between the US and China is not inevitable. But if history is any guide, there’s an excellent chance – say, 75% – that Steve Bannon will be proven correct soon.

One thing I’m sure of is that the mainstream financial media are wrong about the trade war. Even if some sort of deal is worked out, it will do nothing to resolve the larger problem of Thucydides’ Trap.

China’s rise is a Big Idea… arguably the Biggest Idea of our time.

Lee Kuan Yew, the former leader of Singapore, put it like this:

The size of China’s displacement of the world balance is such that the world must find a new balance.

It is not possible to pretend that this is just another big player. This is the biggest player in the history of the world.

Rising tension between the US and China is a trend you can bet on, regardless of what happens in the trade war. I think it’s a near-certainty. And it presents an opportunity for savvy investors.

You see, China has an ace up its sleeve… and as tensions between the US and China escalate, it will be forced to play this card. That will send this one industry soaring, potentially 10-to-1 overnight.

A consequence of the China-US rivalry is the near-certainty rare earth elements (REEs) will come into play.

REEs are 17 elements mostly clumped together at the end of the periodic table with atomic numbers 21, 39, and 57 to 71.

For example, erbium amplifies light and is used in fiber optic cables.

Gadolinium is used in X-rays and MRI machines.

Neodymium is used in cell phones and laptops.

Europium is used in lasers and fluorescent lights.

Most people have never heard of these obscure elements, but they are absolutely essential to modern life.

The screen you are reading this on relies on REEs.

There is no substitute for REEs in advanced electronics. The US military and US consumers are wholly dependent on them.

And China has a virtual monopoly in the space. It produces around 90% of global REE supplies. It also produces nearly all of the world’s more valuable heavy rare earths. Separating REEs from ore is toxic, expensive, and dangerous to the workers. China has fewer environmental regulations and therefore disregards environmental and labor safety concerns in a way that other countries cannot. This lets it produce REEs at a much lower cost than its competitors.

Further, Beijing subsidizes the industry. It’s unknown exactly how much China subsidizes its REE industry (as it’s notoriously opaque), but it’s clear the Chinese government considers the industry a national priority… and will pour as much money into it as needed.

In short, lack of environmental and employee regulations… along with a big subsidy… are how China achieved dominance in the REE business. As Chinese leader Deng Xiaoping once said, “The Middle East has oil. China has rare earths.”

That’s why, as we can see in the graphic below, there is only one operable dedicated REE mine in the entire world outside of China. Other non-Chinese mines are years away from production. In other words, there is no alternative to China in the short term. How to Profit From “Thucydides’ Trap”

Even a whiff of the possibility that China could restrict REE supplies would send prices soaring.

We know this because it’s happened before… and it triggered one of the most spectacular booms in recent memory.

Back in 2010, a Chinese fishing vessel was sailing in disputed waters when it collided with Japanese coast guard patrol boats. The collision happened in waters claimed by both Japan and China.

The Japanese arrested the Chinese captain. China demanded his release, but Japan refused.

This sparked a major diplomatic dispute between the two countries. In retaliation, China abruptly cut off all REE exports to Japan. It also cut global exports by 40%.

The average price of REEs skyrocketed by over 20 times.

Over the next couple of months, companies in the industry went up many times higher.

This one incident caused a veritable mania in REE stocks that lasted for nearly a year.

And we know what happens when China uses it.

As tensions between the US and China escalate, it’s only a matter of time before the REE card gets played again. And this time, I expect it to be even more dramatic than the previous boom.

Recent events suggest it could be imminent.

If you’ve been anywhere near a radio… computer… or television since the summer of 2016, when then-presidential candidate Donald Trump first laid out his plans to battle China’s “unfair” trade policies, you know the basics of the trade war.

It’s the most urgent aspect of the US-China confrontation right now.

As you may have seen in the news, the trade war is spiraling out of control as each side escalates the conflict.

With the context of the trade war and Thucydides’ Trap in mind, China has stated loud and clear that it won’t hesitate to play the REE card.

Threats to restrict REE supplies have been plastered across Chinese media recently.

Further underlining the message, in May President Xi made an unusual visit to a state-supported complex in Ganzhou, which is known as the “Kingdom of Rare Earth” for its rich REE deposits.

It’s not every day that China’s No. 1 shows up at a dirty mine in the middle of nowhere. The timing of the trip was no accident. It was meant to send a message to the US.

As tensions rise, China will inevitably play the REE card and act to restrict supplies, just as it has done in the past. That will send REE prices – and the shares of REE companies – to the moon.

Given recent and unprecedented developments, that could happen imminently. The time to get positioned for big profits is now.

The best way to get exposure to rising REE prices is to invest in shares of REE-related companies.

Bottom line, China-US tensions are destined to get worse as the trade war and Thucydides’ Trap play out.

REEs are going to come into play during this confrontation, and that is going to be bullish for REE prices… and the companies involved.

Editor’s Note: The rivalry between the US and China is getting intense. The battle for who will be the world’s top power is playing out right before our eyes.

That’s precisely why legendary speculator Doug Casey and his colleagues just released a new video on this crucial topic. Click here to watch it now.

China’s Secret Weapon That Could Swing the Trade War

Rising tension between the US and China is a trend you can bet on, regardless of what happens in the trade war.

David Stockman on War with Iran, Oil, and the 2020 Election

What role will foreign policy play in the 2020 presidential election?