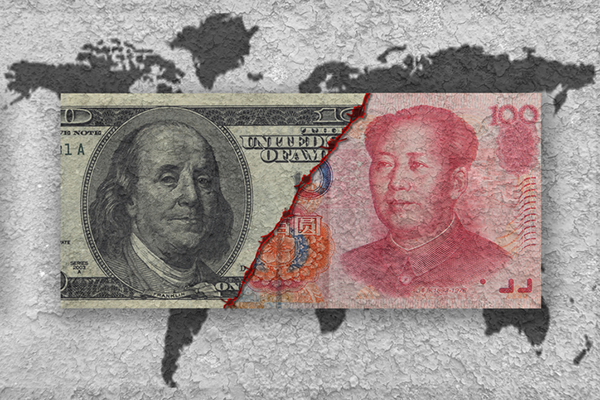 Nick Giambruno’s Note: A trade war between the US and China is now closer than ever. So this week, I’ve been sharing a series of essays to help you navigate the conflict. (Catch up on parts one and two.) Today, I explain China’s next big move…

“When any market is down 90%, you’re obligated to go and investigate.”

That’s what Doug Casey often says. And it’s part of the reason I put my boots on the ground in China a few months ago.

As I told you yesterday, the country has a monopoly on a little-known resource market. For years, stocks in this sector only went down. The industry was left for dead… until recently.

The last time this happened, the price of this resource skyrocketed over 10 times almost overnight.

And, as I’ll show in a moment, I think there’s a strong chance a similar mania will start soon…

Most people have never heard of the material China controls. But it’s essential to modern life.

There’s no substitute for this resource in these advanced electronics. The US military and US consumer depend on it.

The problem is that finding this material isn’t cheap. And once you find it, mining it is expensive and messy. It takes about 40 tonnes of rock (40,000 kilograms) to get only about 250 kilograms of this valuable material.

The costs are even higher if you separate the material from the ore in an environmentally friendly way.

But China is willing to do the dirty work.

Beijing helps by subsidizing the industry. Meanwhile, many companies in other countries—operating without hefty state subsidies—go bankrupt.

Plus, China doesn’t fret about the environmental fallout as much as other countries. This lets it produce the material at a much lower cost than its competitors.

Until recently, one company in the US still produced a small amount of this material. Then, after a spat with a neighboring country, China flooded the market with supply. This oversupply drove the last US company out of business.

According to a US Congressional report:

[China] flooded the market by more than tripling the previous world supply of the materials. During this time, [Chinese firms] were largely unprofitable but were allowed to survive through direct and indirect support by the Chinese government.

Mines in the United States and elsewhere, unable to remain profitable against cheap Chinese exports, went out of business.

This is how China undercut everyone else and came to dominate the industry. Today, China produces around 90% of global supplies of this material.

In short, no one poses a serious threat to China’s monopoly. China can simply hold prices lower for longer than any competitor can stay solvent. 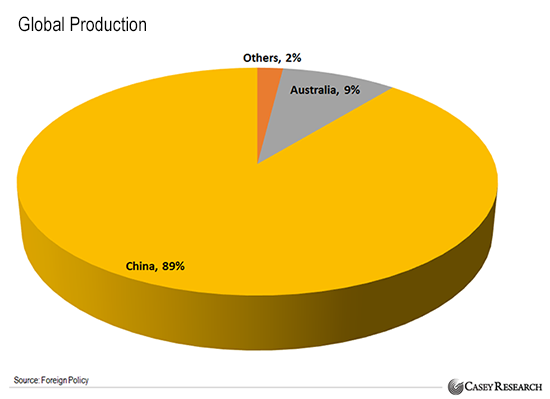 This unchallenged monopoly could quickly become a huge problem for the US. But the US government won’t just sit on its hands…

The US-China Trade War Is Heating Up

Regular readers know I think a full-blown trade war between the US and China is imminent. And we’ve already heard the opening shot.

Early on in his presidency, Donald Trump indicated that he wouldn’t handle China like the previous US presidents.

In January 2017, he became the first president in 40 years to speak with the leader of Taiwan, an island off the coast of China that Beijing considers a renegade province.

Even during the campaign, Trump famously threatened a 45% tariff on Chinese goods entering the US.

He also said China was sucking “the blood out of the United States” and “we can’t continue to allow China to rape our country, and that’s what they’re doing.”

Getting tough with China on trade is a campaign promise Trump can actually keep. He doesn’t need anyone’s cooperation. Legally, he can implement the necessary policies on his own.

And last summer, Trump fired the first shot in the trade war.

His administration launched an investigation against China using Section 301 of the Trade Act of 1974.

This rarely used provision allows Trump to “take all appropriate action… to obtain removal of any [trade] practice that is unjustified, unreasonable, or discriminatory, and that burdens or restricts U.S. commerce.”

The Chinese considered this a provocative move. Since the World Trade Organization (WTO) was founded in 1995, member countries—including China and the US—have traditionally settled trade disputes through it.

But Trump, using the Section 301 investigation, is taking a one-sided approach.

As I mentioned yesterday, China has a big card to play now. It could easily restrict supplies of the special material again.

That would bring any country—including the US—to its knees.

This isn’t some wild speculation. Remember, China didn’t hesitate to restrict supplies in the past.

Plus, if it restricts supplies again, I think the WTO will give its blessing. That’s because China’s move would probably be in response to one-sided US trade penalties—something Trump has already shown he’s willing to implement.

There’s no way around it. The Chinese are ready to use their monopoly in this market. It’s their ultimate weapon in the trade war with the US.

The good news for investors is that we can use this crisis to make huge profits.

Prices of this special resource are still near their lows for this cycle. So before tensions between Washington and Beijing escalate further, we can buy a dollar’s worth of assets for a dime or less.

This way, we’ll be positioned to profit before the war heats up and the next mania kicks in.