Even before the Obama Administration introduced the new myRA program last year, there were whispers that the U.S. government would “assume some risk” for U.S. retirement accounts.

That makes for a nice sound bite, but it’s really code for forcing American savers to buy government bonds.

Here’s how it works. There’s no minimum balance to open a myRA account. And the accounts don’t incur fees.

However, your myRA can only invest in U.S. Treasuries, which probably won't even come close to keeping up with the real rate of inflation. In other words, what myRAs really offer is “return-free risk.”

As foreigners and the Federal Reserve buy fewer U.S. Treasuries, the U.S. government is searching for new buyers of its unwanted debt. This is where the new myRA program comes in.

The accounts don’t offer any significant new benefits over the existing options. They’re simply a way for the U.S. government to pass the hot potato on to unsuspecting Americans in exchange for their retirement savings.

The net effect is that Americans will funnel more of their savings into Treasuries. This, in turn, will help the U.S. government finance itself.

The truth is, a myRA is a sucker's deal at best. But I suspect there’s something far more sinister behind this program…

As bad as it is to deceive naïve Americans into trading their hard-earned savings for the paper promises of an insolvent government (i.e., U.S. Treasuries), I think this is only the first step toward nationalizing private retirement accounts.

Ultimately, this scheme is a way to gradually make the American people accustomed to government involvement in their private retirement savings.

It would be foolish to assume the U.S. government couldn’t or wouldn’t nationalize retirement accounts. History shows that it's standard operating procedure for a government in dire financial straits. 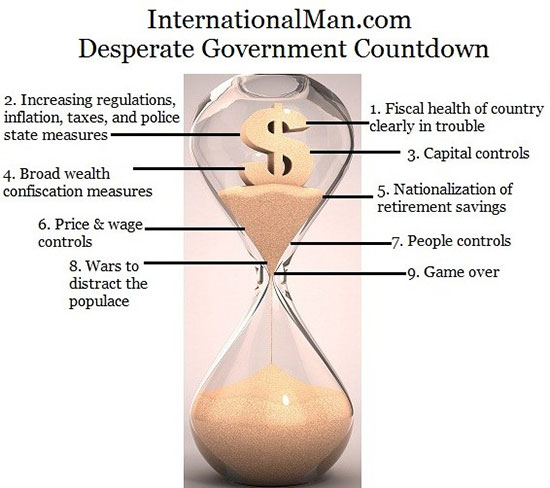 In recent years, the governments of Argentina, Poland, Portugal, Hungary, and numerous other countries have all confiscated retirement savings in one form or another.

Most Western governments, especially the U.S., have debt loads and spending commitments that all but guarantee they will eventually (likely someday soon) try to unscrupulously grab as much wealth as they can.

And retirement savings are a juicy target. They’re the lowest-hanging fruit for any desperate government.

Naturally, politicians will try to slickly sell the idea to the public as “for their own good.” Expect to hear vague taglines like “protection from market instability.” This is how they’ve sold similar programs in the past.

In reality, governments don’t implement these schemes to “reduce the risk” to your retirement savings, so forget whatever propaganda they throw your way. Their real purpose is to finance runaway government spending by forcefully dumping unwanted debt onto seniors and savers.

Below, I’ve listed several ways this has happened before in other countries. The U.S. could use any one of these methods. Or it could create some new way to steal that was previously unthinkable.

No matter the method, the end result is always the same. These schemes siphon off of purchasing power from your retirement savings and funnel it into the government’s coffers.

You Have a Way Out

It would only take a decree from the U.S. government and poof! Your dividend-paying stocks and corporate bonds could instantly be transformed into government bonds.

If you place a juicy steak in front of a salivating German shepherd, it's only a matter of time before he makes a grab for it.

In this case, the U.S. government, with its $19 trillion-plus debt load is the salivating German shepherd, and the $20 trillion in retirement savings is the steak in jeopardy.

Now that the U.S. government has officially set its sights on your retirement savings with the myRA program, the situation has become truly urgent.

That’s exactly why Doug Casey and I just released a video, “America: Ground Zero.” It will show you exactly how to survive the coming financial storm that will be far more severe than what we saw in 2008 and 2009. Click here to watch it now.

Doug Casey: How Much Money Is Enough?

The purpose of having more money is to get what you want out of life. And you may have more than enough money to do that right now, if you just take stock and reallocate it.

The Gravest Threat to Your Retirement

It has nothing to do with Social Security, the War on Cash, or the economy…

The U.S. Government Is Targeting Your Retirement Savings… Here’s What You Can Do

Your retirement is a juicy target for the U.S. Government. Is your money safe?