Welcome back! Today we're going to pick up from where we left off from last week and discover how Dan Gallapoo (aka Doberman Dan) started a “lifestyle” business that has supported him for the last 17 years, giving him the freedom to travel and live anywhere in the world where there's an Internet connection.

As an important part of the Internationalization Triangle – income diversification in this manner is something almost anyone can do.

Without any further delay, here's a “blow by blow” account of…

It all started when I wrote a little bodybuilding manual called A Genetically Average Joe's Guide To Gaining 20 lbs. of Muscle In Eight Weeks.

To sell my little self-published bodybuilding manual, I took out a classified ad in one of the muscle magazines.

I wrote some spellbinding copy, which I was SURE would whip my market into a buying frenzy… and the checks would come swooping into my mailbox by the thousands.

The magazine had a stated circulation of 100,000. I was obviously new at the game and expected a 10% response (though return on investment is a more important judge of success, 1-2% response is generally considered exceptional). I only printed up twenty copies of the manual because that's all I could afford. I planned on printing the other 9,980 copies as soon as the orders started rolling in.

That was a lot of money for me back in 1995. I was dreaming of telling my boss to “shove it”, buying a Porsche, Rolex… and paying my rent on time.

Guess how many orders I actually got.

And it was from an inmate at a state mental hospital.

After all my time and effort writing the manual, slaving away on my brilliant classified ad copy and waiting two months for the ad to come out… only one person was crazy enough (literally) to buy my book.

But did I get discouraged and give up? Nooooooooo… not by a long shot.

As disappointing as that was, maybe I was just too stupid or too stubborn to give up… but I KNEW I could start a successful mail order business. So I plodded along at least trying to fall forward.

I continued learning and studying this direct response marketing stuff and quickly figured out a few things. I discovered I didn't want to just sell a book. There's no profit in that. I needed to sell a “system.” So I added some bonus reports, software, an audio recording and eventually a video. I “bumped” the price up to $49.97 then $77, $97… and finally $177.

Instead of trying to sell directly from a classified, I started doing small “two-step” display ads in the muscle magazines. [Editor's Note: A “two-step” or “multi-step” ad involves asking a potential customer to not buy right away but instead just demonstrate some level of interest first and hopefully purchase later in a follow-up process such as mail or e-mail.]

The ad directed prospects to a 24-hour recorded message where they could leave their name and address to request a free report.

I no longer have the exact ad I used… but it was something like this: 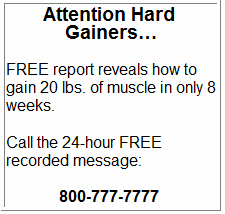 I'll never forget how excited I was the first time I checked my voicemail and had 44 messages. I wasn't so excited two hours later after transcribing all those names and addresses all by hand.

I got smarter down the road and found a voicemail service that transcribed the messages every day and sent them to me by e-mail. (That was really cutting edge stuff back in '95.)

I sent the callers my free report, which was actually an “advertorial” sales letter – a sales letter made to look like a magazine editorial.

I knew practically nothing about copywriting at the time and hadn't read anything about how to write copy. Heck, I didn't even know there was information available about the topic. I just wrote the letter as if I was explaining my product to a friend.

And wonder of wonders, it converted 10% of the leads into buyers.

So I had a profitable little system going… all operated from my kitchen table.

I transcribed the leads… addressed the envelopes by hand… stuffed the sales letters into the envelopes… and made my daily trek to the post office. (A short time later I learned I could have others do all that for me so I could spend more time doing fun stuff instead of “grunt work.”)

I had created a business from nothing, armed only with my wits, a yellow notepad and pen… and had perfect strangers sending me money every day.

Not bad for a lower middle class guy from Barberton, Ohio who was told his gig with the Dayton Police Department was the highest pinnacle of success somebody from his background could ever achieve.

It was all sooooo exciting. I was bitten by the direct marketing bug and realized I would probably be in this business for the rest of my life.

Remember I told you a Kitchen Table Business (KTB) can be started on a shoestring budget? Well, let's review the investment and materials I needed to get this going so you can see I wasn't pulling your leg:

Is this how I would start today?

Yup… but with one additional step.

I would test my two-step campaign online with Google Adwords BEFORE running it in the magazines. The call to action would have the prospect opt-in with their e-mail to receive the free report.

[Editor's Note: Google Adwords are those sponsored ads you see on the right side and sometimes the top of a search results page when you look for something on their site.]

I would test and tweak everything online until the lead-gen ad and free report were all humming along well… and THEN I would start rolling out in the magazines like I described earlier.

I would also test and roll out in direct mail… but that's a subject for another newsletter.

Oh, did I mention that ALL the processes and systems for your KTB can be farmed out and/or operated virtually, freeing you from being a slave to ANY geographic location? To conclude, let's recap the Doberman Dan formula for starting a low cost KTB:

In our short time together today I was only able to give you a brief overview of my process for starting your own profitable KTB. There is MUCH more I would like to share with you.

If you'd like a lot more in depth information, including detailed articles, audio interviews, instructional videos and all the recommended vendors, tools and systems I personally use in my own businesses, please go to www.DobermanDan.com.