There’s an important card missing from your wallet…

Like many people around the world, you likely use a credit or debit card from Visa, MasterCard, or American Express. These are private companies. But ultimately, they have to do what the US government wants.

That means your ability to use these cards—or for your business to accept them—depends on the US government’s blessing. If it wants to sanction or blacklist you, it can easily pressure MasterCard (or whomever) to cut you off.

This gives Uncle Sam tremendous leverage to pressure people and businesses alike. It’s a political weapon. And the US is not shy about using it.

For example, the US government stopped Visa and MasterCard from processing donations for WikiLeaks. (Julian Assange has described these companies as “instruments of US foreign policy.”)

In 2014, the US government blocked seven Russian banks from American payment processors to pressure Russia over its stance on Ukraine. If you were a customer at one of those banks, your debit/credit card was likely cut off without warning.

At the time, Visa and MasterCard processed about 90% of Russia’s payment transactions. Additional US sanctions could have seriously disrupted the Russian economy.

Putin would not tolerate something like that. So Russia immediately switched much of its payment processing to China UnionPay.

You may be able to make a similar strategic move.

China’s Alternative to Visa and MasterCard

No matter where you are in the world, it’s very difficult to do business without access to the US financial system.

China UnionPay is part of Beijing’s answer to this problem.

It works just like Visa, MasterCard, or American Express, except it doesn’t depend on the US government’s good graces. It can operate totally independently of the US financial system.

China UnionPay is growing rapidly worldwide. Merchants and ATMs in over 140 countries accept it. It’s now one of the largest payment processors in the world.

Next time you go shopping or take cash out of an ATM, look for the little UnionPay symbol (pictured below on the bottom right). I bet you’ll notice it in more places than you’d expect. 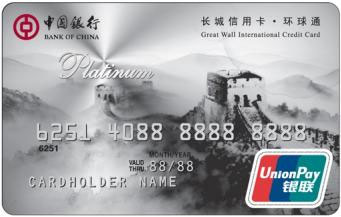 China UnionPay also works in countries on Washington’s “naughty list” and places otherwise isolated from the US financial system. For example, you could use your China UnionPay card in Cuba to buy stuff or withdraw cash from ATMs.

The Next Time You’re in Hong Kong

Of course, the Chinese government ultimately controls UnionPay. But a UnionPay card is a good way to diversify your political risk.

You likely hold uncorrelated assets to reduce the overall risk to your investment portfolio. In the same sense, you can use “uncorrelated countries” to reduce your political risk, meaning the risk that governments pose to your personal and financial wellbeing.

The Chinese government presents its own set of problems. But China isn’t rolling over for the US government anytime soon. It’s not Canada.

In other words, China is politically uncorrelated to the US. That’s exactly what you want.

Holding a UnionPay card gives you significant political diversification. And setting up a Hong Kong bank account is a good way to get one. However, it often requires an in-person visit.

Keep this in mind if you’re traveling to the region soon. It’s well worth a side trip or an extra day in Hong Kong.

For now, practical alternatives to the US financial system are limited. However, as I write, that very system is at risk of unraveling. Find out why—and what you can do to protect yourself—in this special video with New York Times best-selling author Doug Casey. Click here to watch it.

P.S. For now, practical alternatives to the US financial system are limited. However, as I write, that very system is at risk of unraveling. Find out why—and what you can do to protect yourself—in this special video with New York Times best-selling author Doug Casey. Click here to watch it.