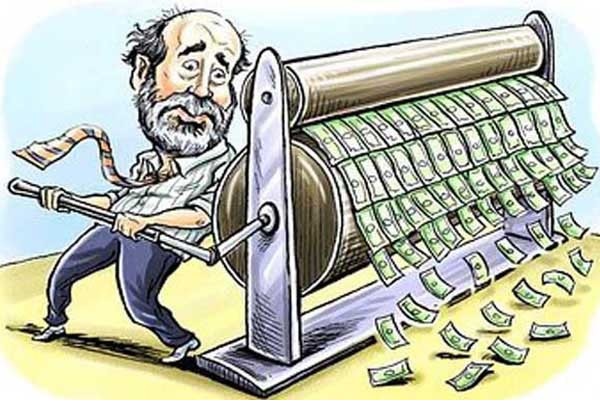 Nick Giambruno's Note: After the US president, the Fed chair is the most powerful person on the planet. By simply uttering the right words, the Fed can create or destroy trillions of dollars of wealth in both the US and abroad.

That’s an absurd amount of power for one person to have.

It’s also a shameful testament about society that the economy is based more on the Fed’s shenanigans than actual production.

Be that as it may, it behooves us to know a thing or two about the incoming Fed chair. For that I turn it over to Doug Casey.

A few words are in order about the likely new Chairman of the Federal Reserve, Jerome Powell.

I don’t know the man personally. Not that it would make any difference; denizens of the swamp within the Beltway usually present well, and a brief meeting rarely allows you to penetrate someone’s social veneer. But I’m pretty confident that if we dined together it would be tense and unpleasant. We’d have no common ground, after the obligatory two minutes on the weather and the state of the roads.

He’s a lawyer, has been a Fed Governor for five years, and appears to be a “steady as she goes” so-called moderate Republican. He’s a lifelong Deep State player. But let’s not waste time psychoanalyzing this bureaucrat; he’s just a cog in the machine. And the machine, at this stage, has a life of its own.

Many of my friends in the alternative press deplore Trump’s appointment of yet another conventional money printer. They were hoping for a “hawk,” who would start liquidating the Fed’s $4.5 trillion balance sheet, and raising interest rates. And they’re right. That $4.5 trillion of super money has driven stock, bond, and real estate prices to insane levels. And today’s artificially low interest rates are discouraging saving, and encouraging people to live above their means.

In an ideal world there would be some radical changes. The best thing for the US in the (famous) long run is to go “cold turkey.” To abolish the Federal Reserve, fire its thousands of employees with their worthless PhDs. Return to 100% reserve banking with a strict separation of demand and time deposits. Depoliticize money by using gold, not Federal Reserve Notes. And default on the national debt, which is rewarding crony capitalists, and will turn future generations of Americans into serfs. And massively deregulate. And abolish the income tax, while cutting spending 90%. Etc. Etc.

The chances of that happening are exactly zero. So let’s talk, instead, about what is going to happen.

We’re going to have much higher levels of inflation. The new Fed Chair will open a monetary hydrant, at least if he doesn’t want to be hung from a lamppost by his heels. But I’m quite pleased Trump has appointed the guy. That may sound shocking. Let me explain why.

A sound economist would work to stop money printing and let interest rates find a market level. But that would precipitate a deflationary collapse after decades of monetary debasement. And the powers of darkness would again be able to paint sound policies and the free market as the cause for the problem, when actually it’s the only cure for economic problems.

From an economic point of view an inflationist like Powell is a disaster. It’s too bad he’s nominally a Republican, since for some reason they’re associated with the free market. As is Trump. Wearing our speculator hats, we’d likely be better off under Hillary—even more inflation, even more distortions to capitalize on. Even wearing our economist hats we might be better off under her, because if the whole rotten structure collapsed on her watch, it might discredit her ideas for at least a few years. But, as ever, I suspect I’m being too optimistic.

As to why a catastrophic depression is inevitable—despite the fact most people try to produce more than they consume, and despite the fact science and technology are advancing exponentially—is beyond the scope of this brief article. I refer you to these pieces (here and here) I’ve done in the past on that topic.

It will be a deflationary collapse if the Fed doesn’t continue buying debt and creating new dollars. And a hyperinflation if they do.

If they stop printing, the banks would fail, and the public would lose a good portion of their deposits. The economy would slow down considerably, causing indebted corporations to default, unemploying their workers. Tax revenues would fall off, and governments wouldn’t be able to fund welfare programs. The stock, bond and real estate markets would collapse, wiping out the asset base of rich people.

It would be a huge social upset. But most of the real wealth in the world would still exist, it’s just that a lot of it would change ownership. And the dollar would still exist—there’d just be many fewer of them. Production and commerce could continue. At least until the cries go out for the government to “do something.”

But hyperinflation will be an even bigger disaster. And that’s what we’re going to get. Money will drop radically in value, making production and consumption much, much harder. Foreigners will dump trillions of them, sending them back to the US in exchange for real wealth. There’ll be even more unemployment than with deflation. But the profligate—those who’d borrowed a lot to live above their means—will be rewarded, while prudent savers will be punished. Shaky, overindebted corporations might survive, while productive ones with fat balance sheets will lose. Worse, governments will have their debts erased, and therefore might even grow in power. They’ll definitely “do something,” they always do in time of chaos. Stocks and real estate could first crash, then soar as people try to get out of dollars and into assets. This will benefit the rich, at least in relative terms.

At this late stage either type of depression will result in not just financial and economic, but in social and political chaos. It won’t be fun. In a depression everybody loses. The winners are just those who lose least. And a few speculators that get lucky. Hopefully we’ll be among them.

Given a choice—and they have a choice, based on whether they keep printing or not—the government and the Fed will definitely veer towards more inflation. Everyone in office just hopes to kick the can down the road for at least one more cycle.

Frankly, I was surprised that things didn’t go over a cliff in 2008 when we entered this most recent hurricane. And I’ve been surprised that things have held together as well as they have during the long “eye of the storm.” But governments and central banks around the world have already printed up scores of trillions of new currency units, and reduced interest rates to zero and below. What can they do when we go into the trailing edge of the hurricane?

My guess is that they’ll repeat their actions so far. Print more money and try to take interest rates even lower. The result will be hyperinflation, or close to it. And lots of new government controls of all types.

Why is this—strictly relatively speaking—good news for us? Because more money printing means more bubbles will be created. And while bubbles are the enemies of a sound economy, they’re the friend of the speculator. The current mania in Bitcoin and other cryptocurrencies is an example.

In particular, I’m looking forward to a bubble in commodities in general (most are down 50% from the previous peak in 2011), and precious metals in particular. And not just a bubble, but a hyper bubble in mining stocks.

So, if I’m right, in the next few years we could stand to make a fortune while the world is falling apart. I know—that sounds harsh to be eating caviar while the masses are forced to grub for roots and berries. But, as Ayn Rand said when asked what you should do about the poor: “Just make sure you’re not one of them.”

Editor’s Note: Regular readers know Doug’s a legendary speculator. But what you might not know is he’s identified opportunities that went on to return 721%, 928%, and 2,154%—plus many others that paid 10-to-1 or more.

Next week, he’s holding a free Master Class training to show readers how he spotted these trades. Reserve your spot right here.

Editor’s Note: Regular readers know Doug’s a legendary speculator. But what you might not know is he’s identified opportunities that went on to return 721%, 928%, and 2,154%—plus many others that paid 10-to-1 or more.

Next week, he’s holding a free Master Class training to show readers how he spotted these trades. Reserve your spot right here.