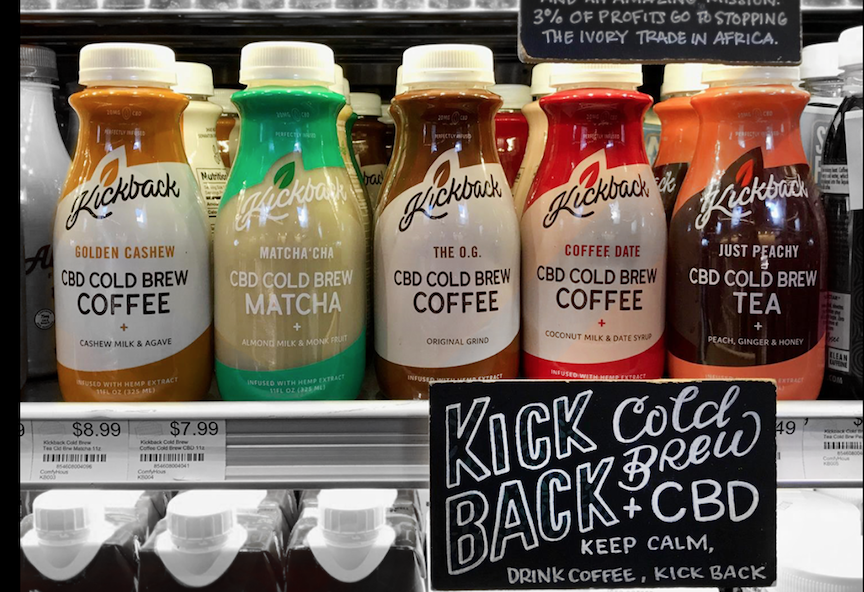 "We've seen her flatline in the hospital and say goodbye… I don’t think she's going to survive this."

These are the words of Charlotte Figi’s father, recalling what it was like to see his five-year-old daughter’s heart stop beating.

At the time, Charlotte was having over 40 seizures a day. The seizures reduced her to a vegetative state and pushed her near death.

A few years earlier, Charlotte had been diagnosed with Dravet syndrome. It’s a rare form of severe epilepsy with no known cure. It lasts a lifetime and often kills young children.

Charlotte’s parents had tried everything to help their daughter. They made lifestyle changes. They gave her powerful prescription drugs. But traditional drugs only made the situation worse.

At one point, Charlotte could no longer walk or talk. Eventually, she couldn’t even eat. Doctors said the only option was to put her in a medically induced coma.

Desperate, her father researched alternative treatments. Eventually, he discovered a video about another family with a young child suffering from seizures. Medical marijuana was the one thing that worked for them.

Initially, Charlotte’s parents thought medical marijuana was impractical because of its complicated legal situation. Nevertheless, they decided to pursue it. They’d already exhausted every other option.

The first step was relocating to Colorado, one of the first states to legalize medical marijuana. Then they had to convince two doctors to prescribe it. (The state required two doctors to sign off on marijuana prescriptions for children.)

Both doctors were reluctant. But they knew Charlotte was on the brink of death. So they gave it a shot.

Prescription in hand, Charlotte’s parents still needed to find a special strain of cannabis—one with low amounts of THC (the compound that gets people high), but a high amount of CBD (cannabidiol).

CBD has medicinal properties but no intoxicating effects. Doctors think it can help stabilize chemical and electrical activity in the brain, producing an anticonvulsant effect.

Eventually, Charlotte’s parents found growers who could help. After years of crossbreeding a strain of marijuana with industrial hemp, they had developed a strain with less THC and more CBD than typical varieties of marijuana.

The next step was extracting the oil from the dried cannabis flowers. Then they could give the cannabis oil to Charlotte.

The results were shocking. On the first day of treatment, she didn’t have any seizures. None. Normally, she would have had over 40.

Using the cannabis oil, Charlotte went a week without seizures. Without it, she normally would have had over 300.

It didn’t take long for Charlotte to start eating again… then feeding herself… then talking and walking. Within a year of starting CBD treatments, Charlotte learned how to ride a bike.

The marijuana growers that grew the high-CBD, low-THC strain of cannabis for Charlotte named it Charlotte’s Web.

Charlotte’s story has helped pave the way for countless other children and adults suffering from seizures. It was featured on CNN.

So far, 30 states have legalized medical marijuana. Nine have also legalized recreational use.

But marijuana is still illegal at the federal level. For the time being, the US federal government classifies it as a Schedule I drug. Heroin and LSD are in the same category.

Marijuana’s schedule I status means the feds believe it has “no accepted medical use.” That’s about as absurd as saying the Earth is flat. But this has been their official view for decades.

This is why it’s been so difficult to study marijuana’s medicinal properties, despite its obvious health benefits. But that’s finally starting to change.

According to three clinical studies—two published in The New England Journal of Medicine and one in The Lancet—CBD was found to significantly reduce seizures.

There’s good reason to think CBD has a wider range of medicinal benefits. It’s already been used to help treat conditions like Parkinson's disease, glaucoma, migraines, cancer and arthritis, among others.

CBD is also thought to have therapeutic benefits. It can help with immunosuppression, neuroprotection, and appetite and bone-growth stimulation.

Because of its many applications, the market for CBD consumer products and pharmaceuticals is enormous.

Market research suggests that the US CBD market is currently worth around $140 million.

But it could easily skyrocket to over $1 billion within the next three years.

As impressive as that sounds, I think it’s probably conservative. Sales of Epidiolex, the CBD drug that the FDA just approved, are expected to reach $1.3 billion over a similar time frame. And that’s just one drug.

In the past couple of months, federal cannabis prohibition has started to erode at an unprecedented pace.

Shortly after the FDA approved Epidiolex, the Drug Enforcement Administration (DEA) confirmed that some sort of rescheduling of cannabis could be imminent. This has to happen before US patients can actually get Epidiolex.

The public affairs officer for the DEA recently told the media: “We don’t have a choice […] It absolutely has to become Schedule II or III.” I expect this to happen before October.

There’s also been another huge development recently, one that I’m particularly excited about. I think it could totally transform the US CBD market.

(Recall that Charlotte’s Web is a crossbreed of marijuana and industrial hemp, used for its rich CBD content.)

The bill passed the Senate in late June in a landslide 86-11 vote. It still needs to pass the House—and Trump needs to sign it—before it becomes law. Both are likely to happen within a matter of weeks.

I expect legalized hemp to be the next domino to fall on the path to full federal legalization of cannabis.

Big Tobacco is already on board. Alliance One—a large, international tobacco firm—recently bought a 40% stake in a hemp producer for $10 million. Alliance One said it made the move to become a major producer of CBD.

This of course, is just the beginning. Once hemp is legal on the federal level, I expect the CBD oil market to explode.

As you may know, hemp and marijuana are the same plant species, Cannabis sativa. However, they are separate strains with distinct compositions and uses.

Hemp has negligible concentrations of THC. It’s pretty much impossible to get high from it. It also has a higher CBD content than marijuana. This is why it’s particularly useful for producing CBD oil.

Industrial hemp fibers are also exceptionally strong. This gives the plant a wide variety of uses.

Americans already buy over $700 million in retail products that contain hemp every year. You can see the breakdown in the graph below. 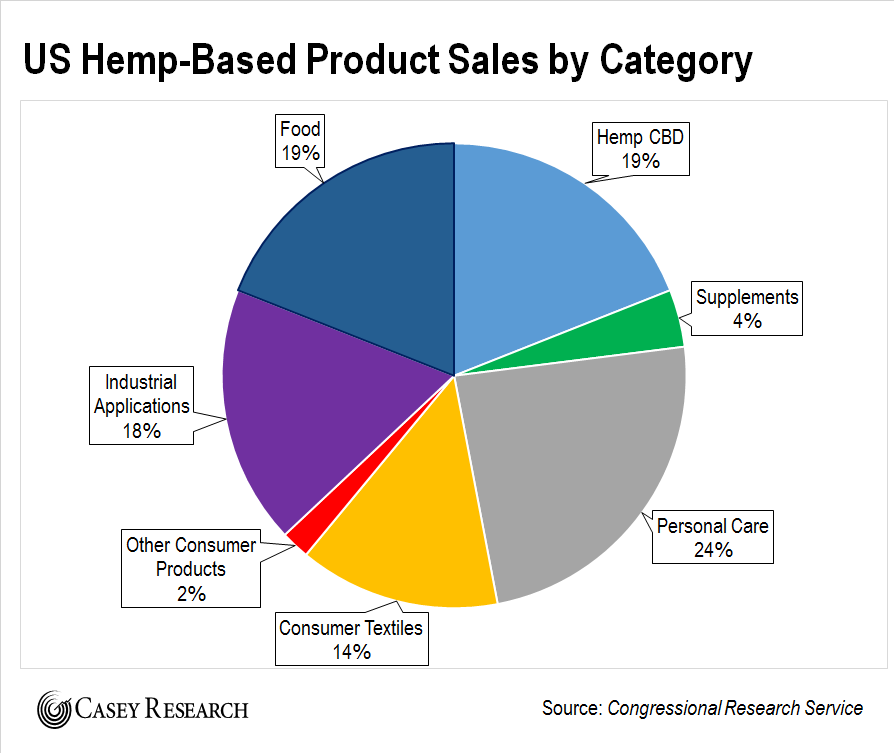 Bear in mind, the Controlled Substances Act (CSA) makes certain parts of any cannabis plant—regardless of its THC content—an illegal Schedule I substance. This includes hemp.

However, certain components of the cannabis plant, like the mature stalks, aren’t considered illegal. But you can’t grow the legal parts without also growing the illegal parts.

Hemp products sold in the US are all produced abroad—mainly in China and Canada. Then US companies import the legal components for various uses.

However, that’s all likely to change very soon…

If McConnell’s hemp legalization bill becomes law, it would open the floodgates for hemp production, as well CBD oil extraction, on a massive industrial scale in the US.

I think the US CBD market could easily grow 10 times larger in the years ahead.

Shares of select publicly traded companies in the CBD industry could surge even higher.

This is presenting investors with another new, huge opportunity to profit from the legal cannabis megatrend. The time to position yourself is now.