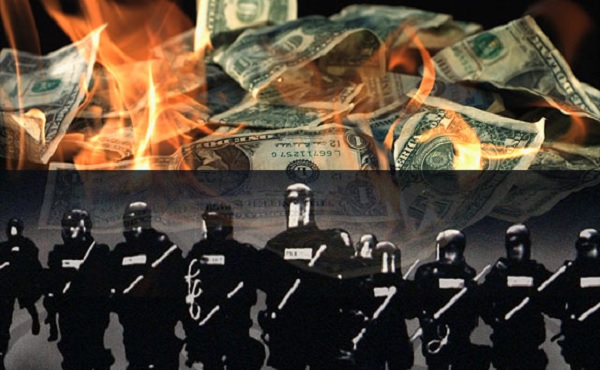 A Note From Nick Giambruno:

In this timely article, which I’m sharing below, my friend and colleague Chris Lowe warns that banks have become arms of the US government.

This means terrifying things for your savings.

When I read this article, I knew I had to pass it along to International Man readers.

Chris is the editor of Bonner & Partners’ Inner Circle publication, which shares insights from Bill Bonner’s personal network of analysts and investment experts around the world.

Bill and Doug Casey are decades-old friends and colleagues.

Like Doug, Bill thinks the worst is yet to come. He says the next financial collapse will be worse than the market crashes of 1987, 2000, and 2008.

The window of opportunity to protect your money is rapidly closing. As Chris explains below, capital controls are already here.

Already, as an American, you are not free to spend your money as you see fit. (For a full breakdown, see “Bank Secrecy Act Regulations Explained” below.)

All financial institutions are required by law to keep records of all financial activity, including cash purchases of “negotiable instruments”—checks, money orders, etc.

These records are open to government inspection at any time. They are also subject to periodic audits by both federal and state governments.

All financial institutions must immediately file a Suspicious Activity Report (SAR) with the federal government whenever a customer engages in transactions the institutions deem strange or inconsistent with normal behavior. This is open to interpretation.

There are also specific BSA regulations requiring financial institutions to file government reports. They are:

Currency Transaction Report (CTR): A CTR must be filed for each deposit, withdrawal, exchange of currency, or other payment or transfer by, through, or to a financial institution that involves a transaction in currency of more than $10,000.

Report of International Transportation of Currency or Monetary Instruments (CMIR): Each person (including a bank) who physically transports, mails, or ships, or causes to be physically transported, mailed, shipped, or received currency, traveler’s checks, and certain other monetary instruments in an aggregate amount exceeding $10,000 into or out of the US must file a CMIR.

Report of Foreign Bank and Financial Accounts (FBAR): Each person (including a bank) subject to the jurisdiction of the United States having an interest in, signature, or other authority over one or more bank, securities, or other financial accounts in a foreign country must file an FBAR if the aggregate value of such accounts at any point in a calendar year exceeds $10,000. A recent district court case in the 10th Circuit has significantly expanded the definition of “interest in” and “other authority.”

Designation of Exempt Person: Banks must file this form to designate an exempt customer for the purpose of CTR reporting under the BSA. In addition, banks use this form biennially (every two years) to renew exemptions for eligible non-listed businesses and payroll customers.

Form W-9 Request for Taxpayer Identification Number and Certification: Applicants must be able to provide a taxpayer ID and certify under penalty of perjury that their ID is correct. The bank is required to enforce the IRS’s “backup withholding” rule if applicable. This means it must withhold customer funds if the IRS determines that you failed to provide a valid taxpayer identification number or failed to pay taxes on 1099 income.

Office of Assets Control (OFAC) Compliance: The bank must make sure the applicant is not on OFAC’s prohibited individuals list. This list includes individuals who have engaged in transactions with governments or individuals located in Cuba, Burma, Myanmar, Iran, and Sudan.

Unlawful Transactions: Applicants must certify that their account will not be used for internet gambling or any other illegal activity.

And all US banks now view large cash withdrawals as suspicious.

Under the Bank Secrecy Act, if you withdraw $10,000 or more in a day, your bank is required to file something called a Currency Transaction Report with the Financial Crimes Enforcement Network (FinCEN). This is a special bureau within the Department of the Treasury that’s tasked with combatting money laundering, terrorist financing, and other financial crimes.

And your bank is required to file something called a Suspicious Activity Report with FinCEN if it believes you are trying to avoid triggering a Currency Transaction Report by withdrawing smaller cash amounts. This puts all cash withdrawals under the microscope.

And taking out cash from the bank isn’t the only activity the government deems suspicious.

And even if you manage to get your cash out of your bank, having it on your person also makes you a target of the authorities.

Under civil asset forfeiture laws, police and federal agents can confiscate any cash you might have on you if they merely suspect it was involved in a crime. They don’t need to bring criminal charges against you or prove any wrongdoing. And they can keep any seized cash for themselves.

According to The Washington Post, since 2007, the DEA alone has seized more $3.2 billion in cash from Americans in cases where no civil or criminal charges were brought against the owners of the cash.

And forget about opening up a bank account offshore to diversify your risk of these kinds of clampdowns.

The Foreign Account Tax Compliance Act, or FATCA, became law in 2010. It imposes a lot of red tape on foreign banks with US clients. And the costs of complying with all this red tape means opening up bank accounts for Americans no longer justifies the benefits of overseas banks.

As a result, it’s now extremely difficult for Americans to open accounts overseas. It’s de facto capital control, even if the government won’t admit it.