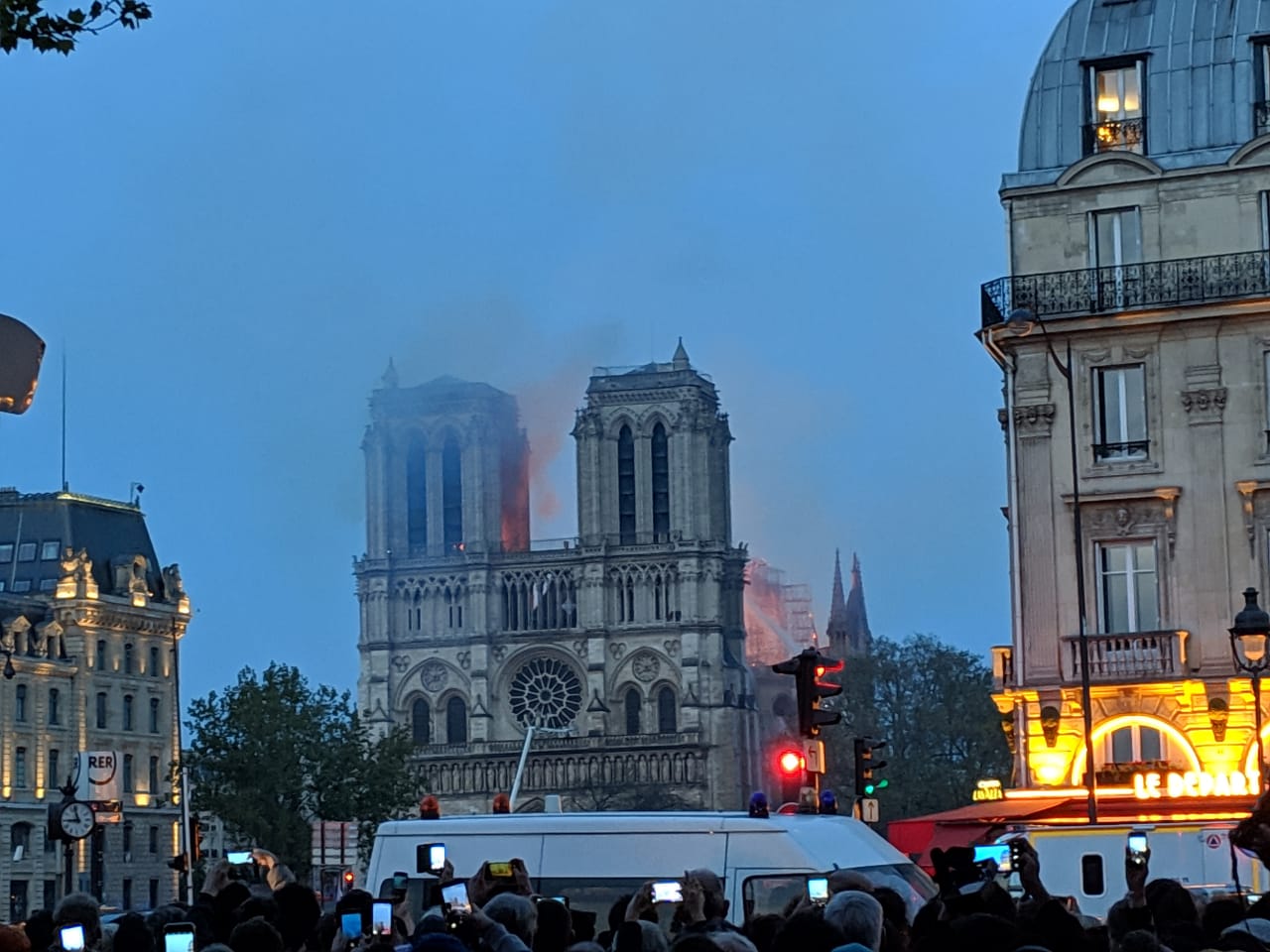 “Nothing makes a man so adventurous as an empty pocket.”

As Paris’ most iconic cathedral was engulfed in flames earlier this week, crowds of somber onlookers gathered on the banks of the Seine.

They sang hymns. They embraced each other. They watched in shocked, helpless silence as 850 years of history looked as though it might collapse.

“It feels like a national hero was shot,” writes a friend, who was standing amongst the crowd. “The mood in the air is like at a funeral. Everyone is in mourning.”

Thankfully, all was not lost. Although the Gothic spire – once the highest point in the city – fell… and the roof was badly damaged… the 12th century oak beams stood, and the towers remain.

The city will rebuild, says the president. (Already, €300 million has been pledged for the purpose, mostly from wealthy families and private companies.)

Of course, the cathedral was more than simply a religious structure. It was a symbol of human achievement… and perseverance.

Recalling our own time living in Paris, where we stayed not two blocks from La Grande Dame, we remember vividly another sort of strength, a type of character that is forged in the crucible of necessity and adversity and even deprivation.

You see it on the streets… and in the peripheral arrondissements … particularly late at night.

The Dark Side of “La Ville Lumiere”

Like most major cities around the world, the City of Lights also has a darker side.

Away from the trendy cafes and breezy museums… far from the designer stores lining the Champs Elysees and the Michelin star restaurants and tourist-thronged boulevards… there is another Paris.

Actually, it’s not really so mysterious, this thriving shadow economy.

In fact, half of the world’s working population today find themselves in its employ, one way or another. From Paris to La Paz… Beirut to Bombay… Shanghai to Stockholm…

We’re referring, of course, to that delicious bastion of creativity and unbridled innovation sometimes known as “System D.”

Robert Neuwirth first coined the term in his 2011 book Stealth of Nations: The Global Rise of the Informal Economy. He used it to describe a special kind of resilience most often found in the world’s collection of off-book alley markets.

It’s a kind of “global street market,” or, if you prefer, one of the only truly free markets left on the planet.

“System D is a slang phrase pirated from French-speaking Africa and the Caribbean,” explained Mr. Neuwirth in an article for Foreign Policy magazine. Further…

“The French have a word that they often use to describe particularly effective and motivated people. They call them débrouillards. To say a man is a débrouillard is to tell people how resourceful and ingenious he is. The former French colonies have sculpted this word to their own social and economic reality. They say that inventive, self-starting, entrepreneurial merchants who are doing business on their own, without registering or being regulated by the bureaucracy and, for the most part, without paying taxes, are part of ‘l’economie de la débrouillardise.’”

Mr. Neuwirth, who wisely abbreviated the phrase to “System D,” estimated the size of the off-book global economy to be roughly $10 trillion annually, although he stresses that this calculation is “very rough and almost certainly on the low side.”

It is important to note here that Mr. Neuwirth does not include activities such as gun running, drug or human trafficking or other nefarious, immoral exchanges in this calculation. Basically, System D refers to the “ingenuity economy, the economy of improvisation and self-reliance, the do-it-yourself, or DIY, economy.”

All in all, this admittedly conservative estimate figures the total System D economy at about two-thirds the size of the world’s largest economy, the U.S., with an output roughly 40% higher than that of China. Accounting for roughly half of all jobs in the world back in 2010, System D’s share of the global workforce is expected to increase to two in every three jobs by 2020.

Is this really surprising, Dear Reader? The various nation states of the world, in the final throes of a deadly debt spiral and facing imminent paper currency crises as a result, are erecting all manner of regulatory hurdles in order to protect certain mollycoddled industries from the evolutionary forces of market capitalism. This, we wager, will not end well for them.

In all likelihood, the U.S., Europe and Japan will never make good on their debt obligations. These three economies count for roughly half the world’s “official” GDP (spurious measure that it is). Earlier this decade, the U.S. tore through the “tipping point” 100% debt-to-GDP threshold. Peripheral states lining Europe are way past that already. And Japan’s debt-to-GDP levels sit at more than double that of the U.S.

Moreover, the deficits are expanding, not shrinking.

The decay of the nation state has been a while in the making, like a slow, gangrenous rot attacking the vital organs of a once productive economic model.

Readers of these Communiqués are familiar with our “State as Parasitoid” theme. The relentless infestation in health care, insurance, education, financial services and, the mother of all zombies, the murderous military industrial complex, grows deeper, more insidious by the second.

Thankfully, these are pillars of a dying economic model. The life-sucking leeches, the favored class and the politically connected, are part of a dying experiment.

We doubt the mal-evolved granny gropers in the TSA security line know it… but we have a hunch the higher ups are starting to get a little nervous. Surely they can smell the blood on the guillotine by now, just as their ancestors once did. Their days of looting with impunity are coming to a close.

The growth of System D is something entirely consistent with a global trend this editor expects to accelerate in the coming years – that of increased geopolitical and economic decentralization prompted by a continued weakening of the overly-indebted, outmoded nation state model.

In other words, as the edifice of the nation state continues to crumble under massive debt loads (and the political impotence to do anything meaningful about it), more and more people will look to the unregulated System D markets of the world for both employment and, increasingly, investment opportunities.

We’re interested in stories of freedom, Dear Reader, and System D is brimming with them. Untaxed, unregulated, unlicensed individuals trading freely with one another with little or no regard for those that would seek to quash their enterprise.

As Victor Hugo once wrote, “Nothing is more powerful than an idea whose time has come.”

From the ashes of the old world, a new one is coming to life.

Stay tuned for more from the “underground” in tomorrow’s issue...