by Doug Casey by Rick Rule 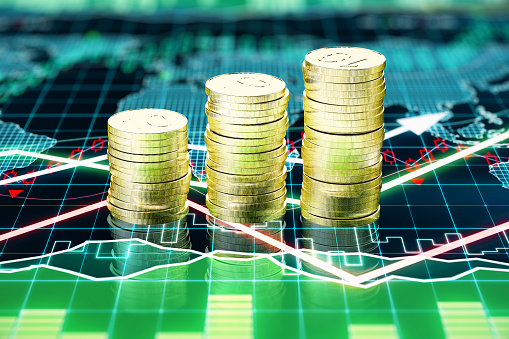 Nick Giambruno: Rick, you’ve been in the resource market for decades. We recently discussed how you’re looking very closely at gold-backed cryptocurrencies. This is where the resource market is intersecting with blockchain technology and decentralized databases.

Rick Rule: Well, first we believe that the potential audience for gold and cryptos is very similar. The people who believe that there should be mediums of exchange that aren’t government-sponsored will adopt both cryptos and gold.

Second, we saw how the distributed ledger could make the inefficiencies of the gold trade go away, to the benefit of all users.

Third, we saw a circumstance where there was a proliferation of crypto products that were in and of themselves faith-based currencies, floating abstraction. Dogecoin is an example that started off as a joke, and then got a bid.

We believe that using the distributed ledger technology to make gold trading more effective was something that the market wanted, and secondly a logical extension of the Sprott brand, which is in some investors’ minds synonymous with precious metals. We already manage well in excess of $4 billion in exchange-traded precious metals on the New York Stock Exchange, and thought an extension of our brand to a crypto product was a logical thing to do.

What was holding us back was the technological capability internally to cause that to occur, and when IEX [Investors Exchange] – the sort of flash boys guys – came into the equation and in fact approached us about being their partner in enabling distributed ledger and blockchain technologies in gold, that was just an offer too good to pass up.

Nick Giambruno: Doug, you’ve talked a lot about sound money over the years. How does a gold-backed crypto play into your notion of sound money?

Doug Casey: Very well. One of the disadvantages of gold is that it’s hard to transport. While today it’s not illegal to cross borders with gold, in two separate countries on two separate continents when I was carrying about a dozen silver one-ounce coins and both times they stopped me at the x-ray machine and examined them. No problem because it was silver and they weren’t worth anything, but if they had been gold it would’ve been a problem.

So it’s not illegal to transport gold, but it’s becoming inconvenient to do so. I think that a gold-backed crypto will kiss that and make it better.

Nick Giambruno: Doug, do you think gold-backed cryptos are a logical evolution of cryptocurrencies?

Doug Casey: Both logical and necessary. Knowing that your digital money is redeemable for a specific and fixed amount of gold somewhere is a huge advantage. Gold-backed cryptos are going to be huge. The best of both worlds.

Nick Giambruno: Rick, you mentioned that the blockchain helps eliminate some of the inefficiencies of traditional gold warehousing companies. Can you elaborate on that?

Rick Rule: Sure. If one of your readers wanted to go out and buy, say, 10 ounces of physical gold, the spot price is the reference price. But the truth is at many bullion dealers they’ll pay a 3% or 3.5% markup.

Should they change their mind two hours later and decide to sell it, they wouldn’t get spot on the sell side either. They’d get a 3% or 3.5% markdown, meaning that the simple act of buying and selling 10 ounces of gold can cause the investor to experience 7% or 700 basis points of friction.

On top of that, one often pays to store and insure that gold, and they also pay for shipping and receiving.

If you eliminate the vast bulk of those transaction fees, you can see the incredible increase in economic efficiency for buying and selling gold through a distributed ledger, through the blockchain.

And that was really the most important thing that appealed to us. We just wanted to make the gold trade much more efficient for those investors who believed that gold was a savings product, that gold was money.

Nick Giambruno: Doug, I personally believe there will never be a gold-backed crypto that can completely stand in for gold. There is simply no substitute for owning physical gold that you can readily hold in your hand.

However, owning large amounts of physical gold presents its own challenges. It’s hard to store securely, move long distances, and break down into smaller amounts. A gold-backed crypto can help address these drawbacks.
That said, any gold-backed crypto will inevitably have some counterparty risk. Physical gold in your direct possession does not.

Instead of being a substitute for owning physical gold in your own possession, I believe gold-backed cryptos are a complementary tool for individuals all around the world to access sound money.

Doug Casey: I agree, Nick. You want both. The reasons why cryptos are catching on in the developed world are pretty obvious. We don’t need to go on about that here. I think the real future for cryptos, and this is especially true of gold-backed cryptos, is going to be in the Third World, because 75% of the people on the planet have to use toilet paper currencies – like the Zambian kwacha, the Argentine peso, or the Venezuelan bolívar – that have little value within their countries of issuance and no value at all outside of the borders.

Third world people tend to understand gold. It’s tangible, it’s more understandable than just the idea of a cryptocurrency. If they see a crypto that represents gold, in addition to its other advantages, it’s likely to catch fire. People in Third World countries desperately need a currency that allows them to save and transfer wealth reliably. Something of real value, as opposed to just some locally issued government toilet paper. Cryptos in general, and gold-backed cryptos in particular, are a wonderful innovation not just for us but for the impoverished 75% of the world’s people who live in blocked currency countries.

Nick Giambruno: Exactly… why would anyone abandon their wealth to a constantly depreciating government fiat currency, sitting in an insolvent fractional reserve bank when they can easily save a gold-backed crypto?

On that note, how does a gold-backed crypto help one with political diversification? Is it a new tool in the toolkit?

Doug Casey: I want to emphasize, especially for Americans, that it’s not just a question of what you have and what you’re doing in the market, but where you’re keeping these things. Everyone, not just Americans, should try to have half of their gold, cash, and investments outside of their countries of citizenship and/or residence. You don’t want all of your assets within easy reach of whatever government considers you its milk cow.

To be continued tomorrow…

Thanks to constant interruptions by smartphones and multitasking, our attention spans are getting shorter all the time.

Have we been looking for value in all the wrong places?