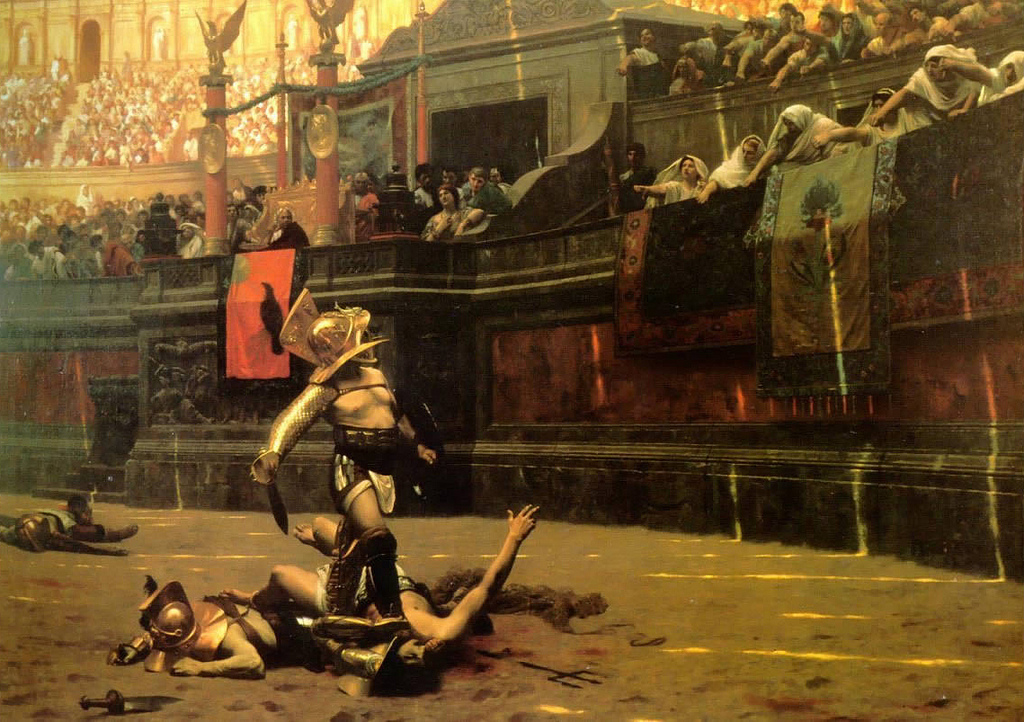 Man: He’ll go along with just about anything.

Given the right circumstances… a little programing… and enough time for it all to marinate in his soft, mammalian brain… there is almost nothing Homo Credulus will not learn to embrace.

Take a look at the historical record; you’ll soon wonder how we ever got this far.

Sure, you’ll discover gizmos and flying contraptions… art and agriculture… music and mathematics. You’ll witness spectacular scientific breakthroughs, the number “0” and a man’s footprint on the moon. You’ll also find automobiles with so many cup holders, you won’t know where to holster your oversized 7/11 Big Gulp.

But you’ll also scratch you head. Perhaps you’ll even weep. And if you think hard enough, you’ll put a few things to serious question…

How has mankind survived such atrocities? Self inflicted, no less! And why, moreover, does he rush so earnestly to repeat and replay his worst mistakes?

Don’t be too hard on yourself, Dear Reader. After all, repetition is nothing new…

You’ll recall that it was the Greeks who first gave the world democracy – from the Greek, dēmokratía, literally “Rule by 'People'”. (And yes, it was those very same Greeks who put their own beloved Socrates to death… by a majority vote of 140-361.)

Today, democracy is a cherished tenet of “the West.” It is woven into the civic religion, sewn into the social fabric. Men march off eagerly to fight for it, to proselytize it … and to die in forgotten ditches defending it.

At least, that’s what they believe they’re doing. As usual, the poor saps have been duped. Herewith, a little historical context…

The phrase “Making the world safe for democracy” was actually a marketing slogan, coined back in the 1910s, as a way to sell “The Great War” to America. Weary from their own disastrous Civil War just a few decades earlier, in which hundreds of thousands gave up the ghost, Americans were mostly inward looking at the time. That is to say, they wanted little to do with what they largely saw as a “European affair.”

Polls might have indicated no appetite for battle… but the nation’s politicians were nonetheless starved for military misadventure. They sensed big profits abroad, both in manufacturing armaments and making onerous bank loans to foreign lands. Sure, “the nation” would have to fill tank and trench with warm young bodies… but very few soldiers would carry senatorial surnames along with their rifles.

And so, after a public relations campaign of truly epic proportions, America marched off to war… wrapped in the delusion they had freshly been sold.

Eddie Bernays, the man who coined the phrase and, thus, peddled the war to America, made a fortune for his efforts. He was even invited by Woodrow Wilson to attend the Paris Peace Conference, in 1919, as a show of gratitude for his services.

There, Bernays learned the full impact of his “democracy” slogan. An obviously bright fellow, the surreal experience caused him to think…

If people will line up to kill one another under influence of a mere marketing campaign… they could surely be convinced to do, say and buy just about anything!

Bernays was right. In fact, he wrote a series of books, detailing his insights. They included Crystallizing Public Opinion (1923), A Public Relations Counsel (1927) and a neat little number titled Propaganda (1928), in which Bernays laid out the blueprint for mass social and psychological manipulation.

The collected works went on to become a huge success… and the favorite of none other than Joseph Goebbles, Reich Minister for Propaganda in Nazi Germany between 1933-45.

Bernays himself, writing in his 1965 autobiography, recalls a dinner at home in 1933 where…

Karl von Wiegand, foreign correspondent of the Hearst newspapers, an old hand at interpreting Europe and just returned from Germany, was telling us about Goebbels and his propaganda plans to consolidate Nazi power. Goebbels had shown Wiegand his propaganda library, the best Wiegand had ever seen. Goebbels, said Wiegand, was using my book Crystallizing Public Opinion as a basis for his destructive campaign against the Jews of Germany. This shocked me. [...] Obviously the attack on the Jews of Germany was no emotional outburst of the Nazis, but a deliberate, planned campaign.

It is indeed chilling to think of such a heinous undertaking as being engineered, blueprinted, premeditated and carried out according to some kind of script. And yet, there it is… in Bernays’ own words, the “Father of Propaganda.”

Having acquired somewhat of a tainted reputation-by-association, propaganda, itself, underwent a “strategic rebranding” after WWII. But make no mistake, the very same métier thrives to this day, under the more socially palatable designation, “Public Relations.”

Still, a ruse by any other name…

“Could we be so stupid again?” wonders the gentle reader. “Might the mob still be swayed by what Charles Mackay termed ‘extraordinary popular delusions and the madness of crowds?’”

Why, of course! That’s the nature of the mob!

Whether in love, finance, politics or any other matter, man is ever wont to be convinced, assured, persuaded, often against his own best interests. Few are the absurdities in which he will not take refuge, invest his hard-earned capital or squander his morality.

All he needs is a good story, something to arrest his imagination and cauterize his capacity for reason. A distraction from his lonely, quotidian existence.

That, and a few crumbs to pass his lips.

The Roman poet, Juvenal, recognized as much when he mocked the panem et circenses (bread and circuses) stratagem almost two millennia ago. In his Satire X, he referred to the Annona (a kind of grain dole) and the famous circus games, held in the Colosseum and elsewhere, as designed to keep the unthinking population fed and happy.

Look around you today, Dear Reader. What do you see, two millennia later, in the Year of Their Lord, 2019 AD?

Now, as then, the show goes on!