Nick’s Note: The explosion of cryptocurrencies has created niche markets that few people have caught on to yet. My colleague Greg Wilson is plugged into this space. And he’s been looking for unique ways to profit from this trend.

These ideas aren’t for everyone, but if you’re daring enough, there’s money to be made. (If you missed Greg’s first idea, check it out here.)

I was in our third-floor office kitchen talking to a colleague when my phone dinged. It was my bitcoin wallet, Airbitz. And I had just received some bitcoin.

My first thought: “That was quick.”

An hour earlier, I tried out a new way to buy bitcoin. I used a bitcoin ATM.

Of course, I had heard of bitcoin ATMs… but there was never one close enough for me to use.

That’s when a nearby shop, Southside Vapor, installed a bitcoin ATM from Bitcoin Depot.

Now, buying bitcoin is only a two-minute walk away from my office. 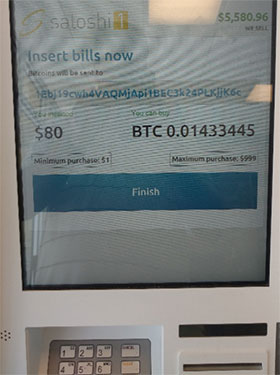 To buy the bitcoin, I entered my phone number and then a confirmation code to verify my identity.

Overall it was painless. And I had the bitcoin within an hour. (The only caveat is that the fees are high.)

The experience impressed me. And I thought this could be a good money-making opportunity for business owners. So, I talked to the shop’s owner, Tyler.

When I asked what he liked most about the bitcoin ATM, Tyler responded, “It brings in traffic and it’s a great talking point.”

Today, I’ll fill you in on our conversation.

Bitcoin ATMs are spreading quickly. There’s likely one near you now.

Every day, five new bitcoin ATMs hit the market. So that number is likely to double or more over the next year.

In other words, the number of bitcoin ATMs is growing over 100% annually right now.

Although over half of bitcoin ATMs are in the U.S., it’s a worldwide phenomenon. There are bitcoin ATMs in 61 countries.

And the machines don’t just send bitcoin. Over 25% of ATMs support other cryptocurrencies, with Litecoin, Ether, and Dash being the most popular.

Monthly costs can range from $500 to $1,500 per machine. That includes rent, cash collection, advertising, and customer support. And there’s also the upfront costs of the machine and any legal costs.

But you don’t need to buy an ATM to take advantage of this trend. Tyler didn’t buy his bitcoin ATM… he went the host route.

Tyler’s adventure into bitcoin ATMs started after he talked to a buddy from New York City.

Like Tyler, his friend owned a vape shop (30 in fact). And he happened to be an early bitcoiner.

So, when bitcoin ATMs started to grow, he hosted one in one of his shops. Now he has bitcoin ATMs in all 30 stores.

As I mentioned, Tyler didn’t have to buy the ATM. He’s simply provided the space.

Best of all, he doesn’t have to worry about exchange risk, changing out the machine, or legal costs. Bitcoin Depot handles all that.

They even handle the online advertising. Whenever someone searches Google for a bitcoin ATM in Delray Beach, Florida, Tyler’s will come up.

Tyler even has a 2-mile non-compete agreement. Meaning, Bitcoin Depot won’t put any other bitcoin ATMs within 2 miles of Tyler’s shop.

By now, I’m sure you’re wondering how Tyler gets paid.

That depends on the activity. Tyler either gets a flat fee or a payment based on the transaction volume, whichever is higher. Said Tyler, “It’s helping pay the rent.”

Before I left I asked Tyler one final question. Would you recommend hosting a bitcoin ATM to other shop owners?

If you own a business and can host a bitcoin ATM, this is an idea worth checking out.

Editor’s Note: On November 2, Greg will be joining colleague Teeka Tiwari during his emergency cryptocurrency briefing.

Teeka’s giving away a lot of his best training material for free, too. So even if you’re not sure cryptocurrencies are for you, we urge you to sign up just to get all the free material, and see what you think. You can register right here.

P.S. On November 2, I’ll be joining my colleague Teeka Tiwari during his emergency cryptocurrency briefing.

Teeka’s giving away a lot of his best training material for free, too. So even if you’re not sure cryptocurrencies are for you, I urge you to sign up just to get all the free material, and see what you think. You can register with one click right here.