I was recently somewhat disappointed trying to find the cheapest ticket from Santo Domingo, Dominican Republic to Quito, Ecuador. Those two capitals are reasonably close to each other, so I naively assumed that the travel would not be too expensive.

Well, I was wrong, to say the least, as travel between those two points cost no less than $1000 for a roundtrip. Here is the price table for that trip. I reserved my flight early enough that ticket availability should not have been an issue. 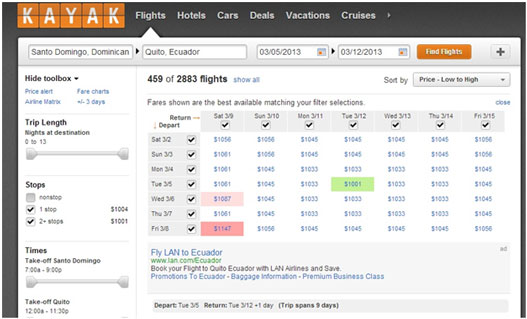 So the breakdown is the following: $1,001 with American Airlines, $1,061 with Copa (Panama), and Avianca (Colombia) for $1,087 (last two options are not shown in the table). Those are the lowest fares I could find. Not particularly cheap. In many other parts of the world, $1,000 can take you pretty much halfway around the globe. I noticed a long time ago that in Latin America there are very few discounters that fly inside of the countries, and literally no international low-cost carriers. And this example is not unique. Literally any flight in South America will cost you an arm and a leg, unless you know the ways to minimize your travel costs in the region.

I typically use websites like Kayak, Expedia, or Google’s semi-professional search engine called Matrix Airfare Search. Matrix is normally able to show me a wider range of flights by combining some unusual routes and including longer layovers. Matrix's options in many cases are not necessarily simpler or cheaper, but it is still good to compare.

If none of the flights suit me, I go to the Wiki page of the airports I will be using. In this example, that would be the airports at Santo Domingo and Quito. On the wiki pages you can find which airlines fly there, and in case some of the airlines did not show up in your searches earlier, you can go straight to the airline's website and look up flights. (I've never seen Cubana or many of the regional airlines of South America show up in any of the searches.)

So, in our example, the most obvious airline choices were American (via Miami), Copa (via Panama), and Avianca-Taca (via Bogota or Lima).

Since all the flights were ridiculously expensive, I looked into reward travel on various airlines.

First, American Airlines, aa.com. I have their credit card, so I have accumulated plenty of miles with them. 15k miles are required from Santo Domingo to Quito in March, and 35k for the return flight. Total of 50k miles, plus about a hundred dollars in tax. That's a lot of miles. (You can potentially find a trip for 15k+15k, such as during April.) As you can see, reward travel choices with American are very limited between those two destinations. So, we skip it.

You need to have an account before the start of this type of promotion; so, register now, and during the next promotion, buy a bunch of miles for future travels. You can also earn LifeMiles by flying with any airline that is part of Star Alliance.

There are 3 major alliances, and you can find which airlines belong to what alliance at this wiki entry. So, for example, when booking your flight on United or Singapore airlines, just choose those miles to go to your LifeMiles account.

Here are some simple rules about travel on airlines that are in the same alliance:

But let's return to our original search. Copa is a Panama-based airline with extensive routes in Latin America. Copa and United work together for some flights, so let's look for Copa's reward flights on United's website. For the same dates in March, my flights cost 20,000 miles and $128. That was ultimately the option I chose, since I have accumulated plenty of United miles.

But what if you don't have any United miles? Sign up for the United credit card, and you can get 50,000 miles (or 30,000, depending on the offer) after charging $1,000. That gives you one or two roundtrips worth at least a thousand dollars. There is no annual fee the first year, and after that it is $95. (Miles accumulated on the credit card go into your United account and are not dependent on keeping the credit card.)

Another interesting offer is a credit card by British Airways, which is in the One World Alliance (along with American Airlines). If your application is approved, you can earn up to 100,000 Avios (British Airways miles) by spending $20,000 during the first year.

I hope this information will save you a few bucks.

If you want to learn more, the Boarding Area blog covers all airline and hotel chain reward programs, and reviews the best travel-related credit cards (like the ones I mentioned above).

The bottom line is you may be able to save yourself a significant amount of cash by simply understanding and using the airline reward programs.

Mark Svoboda is a Russian originally from a “tiny town in Siberia” who spent 5 years in Moscow studying in college during the post-Perestroika “crazy 90s” (his words), after which he worked in the Russian oil and gas industry.