It’s not some half-baked attempt to create a new country. It’s the real deal.

Best of all, it’s a country founded on staunch libertarian and free-market principles.

But I don’t blame you if you’re skeptical. I was too. That is, until I spoke with Vit Jedlicka.

Vit is the founder and president of Liberland. It’s a slice of land on the edge of Serbia, Croatia, and the Danube River. Neither country has ever claimed it due to a border quirk. Under international law, that opened up the opportunity for Liberland. 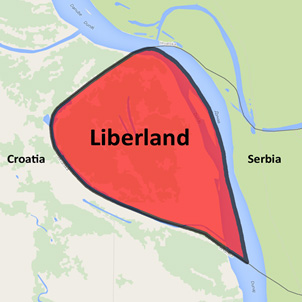 Surprisingly, the reactions of Croatia and Serbia have been cordial instead of resistant.

Vit is in the process of securing diplomatic recognition.

More than 300,000 have applied for Liberland citizenship.

Serious investors have indicated they’d immediately put tens of millions of dollars into the new country.

Liberland has real momentum. Soon it could reach a tipping point.

This is why I reached out to Vit. You’ll find our discussion below.

Nick Giambruno: Tell us a bit about your background

Vit Jedlicka: I’ve been a member of the Free Citizens Party, which is a libertarian party in the Czech Republic. Frederic Bastiat, Murray Rothbard, and other free-market thinkers have been very influential to me.

Nick: Why did you see a need to create a new country?

Vit: I tried hard for five years to affect political change in the Czech Republic. No matter if there was a left wing or a right wing government, we still had more regulations, more taxes, and more corruption.

So I decided I had to do something different. In the end, that led me to set up a country to prove that the ideas of liberty work. That is how Liberland was born.

Nick: How did you choose the location for Liberland?

Vit: We needed terra nullius, which means “nobody’s land.” It’s a term used in international law to describe territory that has never been subject to the sovereignty of any state.

When Yugoslavia dissolved, none of the successor countries claimed this land. It’s one of the very last pieces of unclaimed land on Earth. That allowed us to come in under terra nullius.

Liberland is on the Danube River, which is international waters. No country can restrict access to it. This means we have free access to Liberland no matter what is happening with our neighbors. Nonetheless I believe we will open the land borders soon, first with Serbia and then with Croatia.

Nick: Are there any countries that will officially recognize Liberland?

Vit: We have direct connections now with 15 heads of state, and it’s growing rapidly. We have diplomats active in almost every country in the world. We have yet to fully use that potential. As far as I can tell, no other similar project in the past has generated as much support as Liberland. I think we have a great chance to get international recognition in the coming months.

Nick: What will the role of government be in Liberland?

Vit: We want to find the minimum amount of regulations that are necessary for a limited government to work. To be able to take care of security, justice, and diplomacy, and that’s it. The constitution will prohibit the government from doing anything else.

This is like the United States as it was at the very beginning. The American Constitution was a great piece of work, but it unfortunately didn’t last. Today the US has turned far away from the concept of limited government.

Nick: So how do you prevent that from happening in Liberland?

Vit: Unfortunately it’s impossible to prevent. But we can try to be more effective at slowing the erosion of liberty.

No matter who rules Liberland in the future, it will be hard for them to change anything. To change the constitution, it has to be a unanimous decision by the legislative body. And after that the people can veto it with 50% of votes in a referendum. This is the part that we borrowed from the Swiss Constitution.

I used to say that we are building Liberland to last for 100 years. Now I think it’s going to last even longer than that.

Nick: What about taxation?

Vit: Taxes will be completely voluntary.

We are also developing a system where investors will be able to invest in all of the government’s assets and possibly receive dividends. Shares of the state’s assets will trade on a stock market. Anybody will be free to buy or sell at any time.

Nick: That’s very interesting. Doug Casey has proposed something like this to a number of governments before.

Vit: I’ve been following Doug’s work for many years. To be honest, I didn’t know he was doing this. But I’m glad that we came up with a similar idea.

Nick: Speaking of tax issues, the US, EU, and OECD consistently pressure low-tax jurisdictions. It reminds me of what they did to Andorra, another small, low-tax country in Europe. Andorra never had an income tax in its history. But recently the high-tax countries pressured it into adopting one. How does Liberland expect to cope with these pressures?

Vit: We always try to be positive and would try to use the pressure to our advantage. Such pressure could motivate even more people to join us and dissuade other governments from trying to install tax hells all around the world.

Nick: If you look at history, one of the main areas where the US went wrong was with issues relating to money and currency. Abandoning sound money turbocharged the malignant growth of the state. What does Liberland plan to do here?

Vit: We really want to separate money from the government. There might be a currency of Liberland, but it will not be mandatory to use it.

Nick: What do you say to the people who say that Liberland is just a fantasy or that it has no chance to succeed?

Editor’s Note: To keep up with the latest on Liberland and other ways to maximize your personal freedom and financial opportunity around the world, be sure to get the IM Communiqué.

The End of Tax Havens?

Governments are in a last-ditch effort to squeeze as much wealth as possible from their citizens. Here’s what to do about it.