The Establishment is setting up Donald Trump.

The mainstream media hates him. Hollywood hates him. The “Intellectual Yet Idiot” academia class hates him.

Most critically, the CIA hates him. So does the rest of the Deep State, or the permanently entrenched “national security” bureaucracy. They did everything possible to stop Trump from taking office. None of it worked.

I think the CIA hates Trump for a very simple reason: he’s threatening to take away their livelihood.

Trump wants to make nice with Putin and the Russians. But countering the so-called “Russian threat” is how many thousands of Deep State bureaucrats make a living.

These people feed off the trough of the $1 trillion-plus military/security budget. Playing nice with the Russians would kill their jobs—and end their way of life.

We will pursue a new foreign policy that finally learns from the mistakes of the past. We will stop looking to topple regimes and overthrow governments.

Toppling regimes is the CIA’s bread and butter. No wonder they hate him.

Of course, the feeling is mutual. Trump has used plenty of sharp words to describe the “intelligence community.” He’s reportedly aiming to fundamentally restructure the CIA.

Donald Trump is the first president since John F. Kennedy to openly take on the CIA.

After being suckered into the Bay of Pigs disaster in Cuba, JFK said he wanted “to splinter the CIA into a thousand pieces and scatter it into the winds.”

Kennedy fired CIA Director Allen Dulles. But that was about as far as he got.

JFK, of course, failed to break the Deep State’s grasp on power. In an ironic twist, Allen Dulles would later be appointed to the Warren Commission to investigate Kennedy’s assassination.

The CIA is the undisputed all-time world champion of orchestrating coups. And right now, Trump is squarely on its radar…

How the Deep State Will Take Down Trump

The way I see it, the Deep State has three main cards to play against Trump. If one doesn’t work, they’ll move on to the next one.

Question: Why can there be no “color revolution” in the US?

Answer: Because there are no US embassies in the US.

To get the joke you have to understand the role the US played—through CIA officers based out of US embassies—in orchestrating various color-coded revolutions, really coups d’état, over the past 17 years:

All of these AstroTurf revolutions have one thing in common. In each case, George Soros’ NGOs helped delegitimize the targeted government.

Of course, there were valid grievances against these governments. But the US Deep State manipulated these situations to advance its geopolitical agenda.

Here’s how it worked: Soros’ NGOs would help fund and organize “professional protestors.” Then they’d use color-specific branding to help rally others to their cause.

Soros has turned colored revolutions into a science. The pattern is predictable.

Now it’s playing out in the US.

It smells to me like the CIA and George Soros’ NGOs are trying to start a “color revolution” in the US, just like they’ve done in numerous foreign countries.

The US color revolution already has a color. It’s purple, the mix of red and blue (i.e., red and blue states).

Hillary Clinton has developed a recent fondness for purple. She’s worn purple in almost every public appearance since the election. 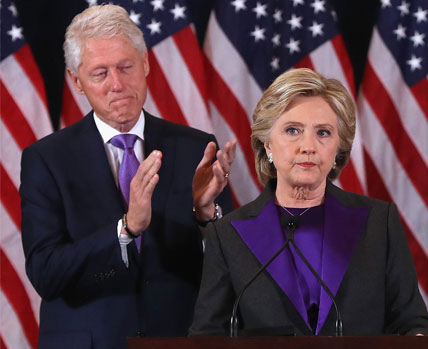 There’s also a flood of social media postings about the color purple. So the branding is already done. And, of course, the professional protestors financed and organized by George Soros are already there.

Again, there are valid complaints against Trump. But the Usual Suspects are using their usual tricks to remove a government they don’t like. It just happens that, this time, the target government is in Washington, D.C., instead of Eastern Europe or the Middle East.

I don’t think the Deep State can get rid of Trump with the Delegitimization Card alone. So they will have to escalate to the next option.

When people think of President Hoover, they mostly think of the Great Depression.

In August 1929, the Fed raised interest rates and effectively ended the easy credit. Only a few months later, the bubble burst on Black Tuesday, in October 1929—barely seven months after Hoover took office. The Dow lost over 12% that day.

It was the most devastating stock market crash in the US up to that point. It also signaled the beginning of the Great Depression.

If that doesn’t work, the Deep State still has one card left.

Schumer said, “Let me tell you, you take on the intelligence community, they have six ways from Sunday at getting back at you.”

It doesn’t take much imagination to understand what he’s alluding to.

Of course, the Deep State could try to assassinate Trump. It’s obvious the possibility has crossed his mind. He’s taken the unusual step of supplementing his Secret Service protection with loyal private security.

As things stand, I think it’s unlikely Trump will defeat the Deep State. It’s been entrenched for decades. And it’s far more powerful than the president.

It’s also unlikely the Deep State will co-opt Trump. It’s just not in his personality to submit and roll over. He didn’t overcome all the odds to become president just to be another empty suit.

The Deep State will play the Herbert Hoover Card next. But if that doesn’t work—or if the Deep State starts to get antsy—they’ll move forward to overthrow him by any means possible.

The Deep State is planning moves during Trump’s first 100 days in office that could change everything in sudden and unexpected ways. New York Times best-selling author Doug Casey and I put together this time-sensitive video explaining how it could all go down.

You must see this urgent video before the Deep State makes its next move. Click here to watch it now.

P.S. The Deep State is planning moves during Trump’s first 100 days in office that could change everything in sudden and unexpected ways. New York Times best-selling author Doug Casey and I put together this time-sensitive video explaining how it could all go down.

You must see this urgent video before the Deep State makes its next move. Click here to watch it now. 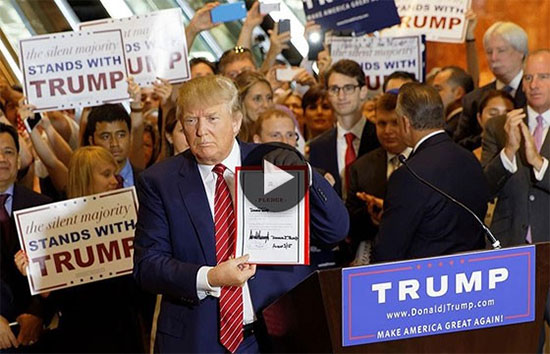