The U.S. government recently reported that 1,426 people renounced their U.S. citizenship in the third quarter. That’s a record quarterly high. Like all government statistics, I view this one skeptically. Many observers think the actual number is much higher.

Still, with another quarter left in 2015, the number of Americans who renounce U.S. citizenship this year could easily top the previous annual record set last year.

I recently spoke with a consultant who gave up his U.S. citizenship. He’s now a citizen of Dominica, a small Caribbean country, and splits his time between Asia and South America.

He said he was leaving a sinking ship for a better life elsewhere. On top of that, the U.S. government is placing an increasing number of hurdles on Americans who want to renounce their citizenship. So he thought it was time to do just that.

This isn’t how the average person sees things. Unthinking Americans are puzzled when they read about the increasing number of people renouncing their citizenship.

As you can see in the chart below, this trend is exploding. And it has important implications for your personal freedom and financial prosperity. 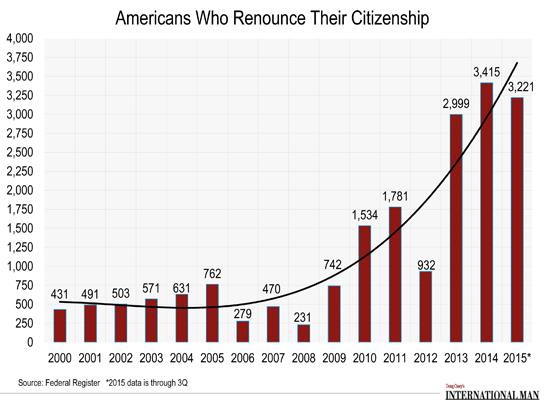 This trend really shouldn’t surprise anyone. The U.S. tax system is the most rapacious in the world. It’s also the most aggressively enforced. For many, the benefits of U.S. citizenship no longer outweigh the costs.

The U.S. is the only country in the world that successfully taxes its citizens no matter where they are in the world…even if they leave and never step foot in the country again. It’s called citizenship-based taxation.

If you’re a U.S. citizen, you should think of citizenship-based taxation as a ball and chain attached to your leg.

Nearly every other country in the world taxes people based on residency, not citizenship. For example, if you’re a Canadian citizen and leave Canada to live in Dubai, the Canadian government won’t force you to pay taxes on the income you earn in Dubai. However, if you’re a U.S. citizen, you have to pay taxes to the U.S. government no matter where you live and work.

Only one other country in the entire world, Eritrea, has citizenship-based taxation.

Eritrea is a tiny, mostly unknown, country in East Africa. It levies a 2% flat tax on the income of Eritrean citizens who live abroad. Unlike the U.S., Eritrea is an impoverished country. Its government has a hard time enforcing its tax system within its own borders, let alone the rest of the world. Many Eritreans who live abroad have never even heard of this tax, and those who have don’t worry too much about paying it.

The U.S., on the other hand, does have the ability to enforce its Byzantine tax system literally anywhere in the world. When you consider the reach of the U.S. government and the penalties for not paying (which can only be described as cruel and unusual), it’s no surprise Americans are terrified. And they should be… or they aren’t paying attention.

The U.S. government threatens Americans with years in prison and outrageous fines if they don’t file a litany of complex forms correctly… even if they don’t owe taxes in the first place. U.S. citizens are in the uniquely unfavorable position of having the world’s worst tax policies and a government that relentlessly enforces them everywhere on the planet.

For many, it’s a tight and suffocating tax leash. Renouncing your U.S. citizenship is the only way to free yourself from U.S. taxation while you’re still breathing. It’s only logical that an increasing number of people are taking this step.

The media routinely condemns Eritrea for its attempts to tax nonresident citizens. Even the United Nations has weighed in. In Resolution 2023, the UN Security Council condemned Eritrea for “using extortion, threats of violence, fraud and other illicit means to collect taxes outside of Eritrea from its nationals.”

The U.S. government supported Resolution 2023, even though it does the very same thing on an industrial scale.

When you think about, it’s actually not fair to compare an impotent country like Eritrea and its relatively modest 2% expat tax to the monstrous U.S. tax system.

Of course, I’m not endorsing the UN. I dislike bureaucracies of any sort…especially ones with a global reach. But it’s noteworthy that they would even bother to weigh in on the repressive practice of citizenship-based taxation.

Unfortunately, the UN is being opportunistic. They don’t care about the tax burdens of Eritreans. If they did, they’d condemn citizenship-based taxation consistently.

But the UN hasn’t made so much as a peep about the U.S.’s racket. If you listen for it, you’ll only hear the crickets chirping.

This isn’t surprising. Even though it’s clearly a double standard, it’s easy to understand why it exists. As the world’s sole superpower and issuer of the premier reserve currency, the U.S. isn’t accountable to anyone.

No other country has the courage or incentive to call the U.S. out. It’s a heck of a lot easier to push around some small, impoverished African country than it is to stand up to the U.S. juggernaut.

The Exit Tax – A Form of People Controls

Take Cuba, for example. After Castro came to power, his government made Cuban citizens apply for exit visas before they left the island. They were not easy to get. The Soviet Union, North Korea, and others have also used similar restrictions.

It’s hardly shocking that productive people are fleeing the U.S. tax system. The U.S. government doesn’t like this one bit. Naturally, it would prefer to squeeze every last drop out of its best milk cows.

To keep them from leaving, the U.S. government has imposed a so-called Exit Tax on Americans who renounce their citizenship.

Eduardo Saverin, the billionaire cofounder of Facebook, is a notable example. By renouncing his U.S. citizenship, Saverin escaped paying an estimated $700 million plus in future income and estate taxes. He could not, however, escape the Exit Tax.

For the Exit Tax, the U.S. government deems you to have sold everything you own on the day before you renounce citizenship at a price equal to its “fair market value.” Any appreciation in your investments or home and any deferred income becomes taxable.

The Exit Tax is a big impediment to leaving. But, as the growing number of Americans renouncing their citizenship shows, it’s not always an effective one. I expect the U.S. government to impose much harsher restrictions – more people controls – in the future.

The Canary in the Coal Mine

I think the growing number of Americans renouncing their citizenship is an important sign of what’s to come. It’s never a good thing when a society’s most productive members flee for greener pastures.

Many of these former Americans grew tired of the government treating them as piggy banks for the social program du jour.

Social Security, Medicare, Medicaid, and the entire U.S. government are broken and bleeding money. Like most governments that get into financial trouble, I think American politicians will keep choosing the easy option…money printing on a massive scale. This has tremendous implications for your financial security.

Politicians are playing with fire and inviting a currency catastrophe. Most people have no idea what really happens when a currency collapses, let alone how to prepare…

How will you protect your savings in the event of a currency crisis? This just-released video will show you exactly how. Click here to watch it now.