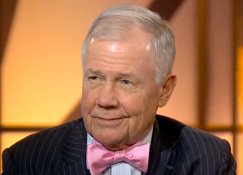 I am very pleased to have had the chance to speak with Jim Rogers, a legendary investor and true international man.

Jim and I spoke about some of the most exciting investments and stock markets around the world that pretty much nobody else is talking about.

You won't want to miss this fascinating discussion, which you'll find below.

Nick Giambruno: Tell us what you think it means to be a successful contrarian and how that relates to investing in crisis markets throughout the world.

Jim Rogers: Well, there are two aspects of it. One is being a trader, being able to buy panic, and nearly always if you are a trader or an investor, if you buy panic, you are going to do okay.

Sometimes it is better for the traders, because when there is a panic—a war breaks out or something like that—everything collapses, and some people are very good at jumping in and buying. Then, when the rally comes, the next day or the next month, they sell out.

Now, the people who are investors can also do that, but it usually takes longer for there to be a permanent rally. In other words, if there's a war and stocks go from 100 to 30 and everybody jumps in, it may rally up to 50, and then the traders will get out, it may go back to 30 again. I'm trying to make the differentiation between investors and traders buying panic.

As an investor, nearly always if you buy panic and you know what you are doing, and then hold on for a number of years, you are going to make a lot of money.

You also have to be sure that your crisis or panic is not the end of the world, though. If war breaks out, you have got to make sure it's a temporary war.

I used to work with Roy Neuberger, who was one of the great traders of all time, and whenever stocks would panic down, he was usually one of the few buyers, because he knew he could get a rally—if not that day, at least maybe that week or that month. And he nearly always did. No matter how bad the news, especially if there's a huge drop, it's probably a good time to buy if you've got the staying power and your wits, because you will likely get a rally. In terms of panic buying or crisis situations, that's normally the way to play.

Now, it's not always easy, because you are having everybody you know, or everybody in the media shrieking what a fool you are to even try something like that. But if you have your wits about you and you know what you are doing, and you know enough about yourself, then chances are you will make a lot of money.

Nick Giambruno: What is the story behind your most successful investment in a crisis market or a blood-in-the-streets kind of situation?

Jim Rogers: Certainly commodities at the end of the '90s were everybody's favorite disaster, and yet for whatever reason, I had decided that it was not a disaster. In fact, it was a great opportunity and there were plenty of things to buy. In 1998, for instance, Merrill Lynch—which at the time was the largest broker, certainly in America and maybe the world—decided to close their commodity business, which they had had for a long time. I bought. That's when I started in the commodity business in a fairly big way. So that's the kind of example I am talking about. Everybody had more or less abandoned or were in the process of abandoning commodities, and yet, that's when I decided to go into commodities in a big way, because of what I considered fundamental reasons for doing it, but the fact that Merrill Lynch was getting out buttressed in my own mind anyway that I must be right, because, you know, everybody was out. Who was left to sell? There was nobody left to sell at that point.

Nick Giambruno: What about a particular country?

Jim Rogers: I first invested in China back in 1999 and then again in 2005. The market at those times was very, very bad. I invested again in November of 2008, when all markets around the world were collapsing, including in China.

So I have certainly made investments in countries with crisis markets, and I'm getting a little better at it than I used to be, because I have had more experience now. That's why I keep emphasizing that you have to know what you're doing. And by that I mean paying attention to and doing your homework on a stock or a commodity or a country. If you do that with a crisis market, then chances are you can move in and make some money.

Nick Giambruno: In your opinion, which countries today do you think offer the best crisis or blood-in-the-streets-type opportunities?

Jim Rogers: I think Russia is probably one of the most hated markets in the world. I don't think many people have a nice thing to say about Russia or Putin. I was pessimistic on Russia from 1966 to 2012—that's 46 years. But I've come to the conclusion that since it is so hated—and you should always look at markets that are hated—that there are probably good opportunities in Russia right now.

Nick Giambruno: Doug Casey and I were recently in the crisis-stricken country of Cyprus, which is also a pretty hated market, for obvious reasons. While we were there, we found some pretty remarkable bargains on the Cyprus Stock Exchange which we detailed in a new report called Crisis Investing in Cyprus. Companies that are still producing earnings, paying dividends, have plenty of cash (in most cases outside of the country), little to no debt, and trading for literally pennies on the dollar. What are your thoughts on Cyprus?

Jim Rogers: When I saw what you guys did, I thought, “That's brilliant, I wish I had thought of it, and I'll claim that I thought of it” (laughs). But it was really one of those things where I said, “Oh gosh, why didn't I think of that,” because it was so obvious that you are going to find something.

It's also obvious, after what happened in Cyprus, that it's a place where one should investigate. Whether it is right to buy now or not, you are certainly right to look into it. If you stay with it and you know what you are doing, you do your homework, you are probably going to find some astonishing opportunities in Cyprus. It's the kind of thing that I'm talking about and that you are talking about.

(Editor's Note: You can find more info on Crisis Investing in Cyprus here.)

Nick Giambruno: Speaking of hated markets that literally nobody is getting into, I heard that you managed to find a way to get some sort of exposure to North Korea through bullion coins. Could you tell us about that?

Jim Rogers: Yeah, you know, it's illegal for Americans to invest in North Korea. It's probably illegal for us to even say the word “North Korea” (laughs). I look around to see which countries are hated. In North Korea there is no stock market, and there is no way to invest, especially if you are an American, but sometimes you can find something in a secondary market.

Stamps and coins were the only ways I knew of that one could get some sort of exposure. This is because you are not investing in the country, obviously, because you are buying them in a secondary or tertiary market. That said, I think the US government is going to make owning stamps illegal too.

Nick Giambruno: Another hated market that actually does have a pretty vibrant and dynamic stock market is the Tehran Stock Exchange in Iran. Have you ever taken a look at this market?

Jim Rogers: Yes, at one point I did invest in Iran, back in the 1990s and made something like 40 times on my money. I didn't put millions in because there was a limit on how much a person could invest. But this was over 20 years ago. I would like to invest in Iran again, but I don't know the precise details on the sanctions and the current status of Americans being able to invest there. But Iran is certainly on my list. And so are Libya and Syria. I'm not doing anything at the moment in these countries, but they are places that are on my list.

Nick Giambruno: Switching gears a little, do you have any final words for people who are thinking about internationalizing some aspect of their lives or their savings?

I obviously do it for many other reasons than that. I do it because I think I can make some money finding opportunities outside your own country. Many people are a little reluctant, you know. It's tough to leave your safe haven. So I try to explain to them, “Well, you have fire insurance, why don't you look on investing abroad as another kind of insurance?” and usually what happens is people get more accustomed to it. And they often invest more and more abroad because they say, “Oh, my gosh, look at these opportunities. Why didn't somebody tell us there are all these things out there?”

Nick Giambruno: Jim, would you like to tell us about your most recent book, Street Smarts: Adventures on the Road and in the Markets?

Jim Rogers: I've done a few books before, and then my publisher and agent said, “Look, it sounds like it must be quite a story to have come from the back woods of Alabama to living in Asia with a couple of blue-eyed girls who speak perfect Mandarin. How did this happen? Why don't you pull this all together and it might be an interesting story?” So I did, somewhat reluctantly at first, and then, lo and behold, people tell me it's my best book. Whether it is or not, I will have to let other people decide, but that's how it happened, and that's what it is.

Nick Giambruno: Jim, thank you for your time and unique insight into these fascinating topics.

Jim Rogers: You're welcome. Let's do it again sometime.