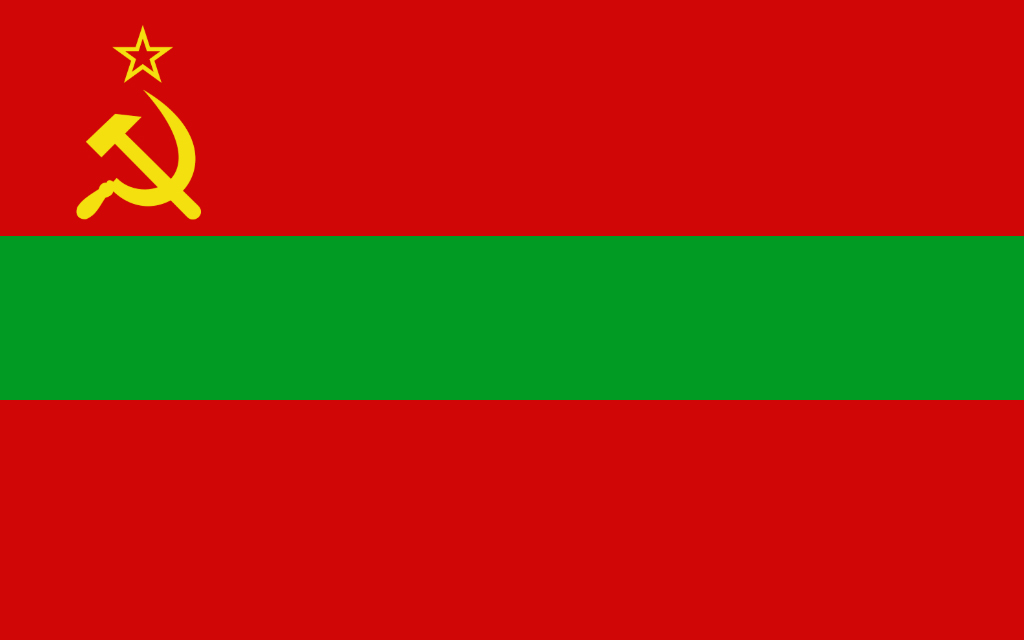 “You can take photos once we’re inside,” our guide advised us, “but not at the border. Absolutely not. There, you must let us do the talking.”

An hour and a half drive from Chișinău, Moldova’s capital, between the Dniester River and the Ukraine border, lies the disputed autonomous zone of Transnistria. It is one of a small handful of so-called “break away states” that declared independence after the dissolution of the Union of Soviet Socialist Republics, the others being Abkhazia and South Ossetia (officially in Georgia) and Artsakh (officially in Azerbaijan.)

These states are de jure part of the nations that claim them (Moldova, in Transnistria’s case), but de facto sovereign nations unto themselves.

What is a state without a nation? What is a nation without inter-national recognition? And, ultimately, what claim can a nation or a state truly have over an individual who recognizes neither?

Transnistria has its own government, funded in part by taxes collected locally and, as our (Moldovan) guide hinted more than once, “unofficial support” from the Russian Federation.

“It is a point of… how do you say… ‘strategic interest’ for them,” she replied when we asked why Russia would care about this tiny sliver of territory, far from its own capital.

For their part, the people of Transnistria – who routinely, reliably vote along separatist lines in referendums on the key question – see themselves as entirely distinct from their Moldovan neighbors.

They speak Russian. They follow Russian customs. And they long, with ill-concealed romantic nostalgia, to return to their glorious communist past. Indeed, the area is often described as a kind of “time capsule” from the soviet era; a rare glimpse at what life was like behind the once impenetrable Iron Curtain. 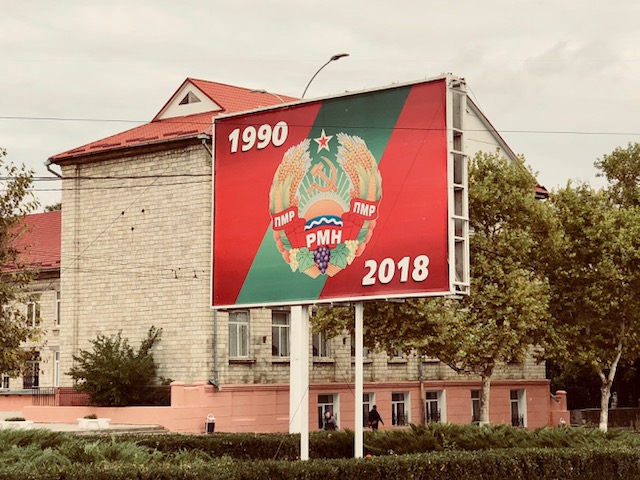 After a while, our vehicle began to slow down into the border zone. First, we passed by a few Moldovan soldiers, who guided us through a series of roadblocks but otherwise waved us through. Next came a kind of “no-man’s land” in which the flags on the soldiers’ arms changed.

“Russian ‘peacekeepers,’” our guide observed, employing the internationally recognized ‘air quote’ bunny fingers. “They were supposed to leave back in the ‘90s. And yet, here they are… still marching… still ‘peacekeeping.’”

A half-mile or so down the road we saw what appeared to be a far more serious border crossing, with boom gates, a security checkpoint and, of course, the official Transnistrian emblem – complete with hammer and sickle – prominently displayed atop the structure.

We handed over our passports and were told to wait in the car. Five… ten minutes passed. Then fifteen…

A “while” later, we were driving along the same road… the same fields either side of us… the same sun shining overhead… but (possibly) in a new country.

Aside from its own government, Transnistria also has a local parliament, its own military and police forces, a postal system and independent vehicle registration. It even issues its own currency – the Transnistrian ruble – which is used for trade and commerce inside the territory. (“Foreign” credit and debit cards are not accepted inside the territory, so be sure to exchange currency in advance if you plan on visiting.) 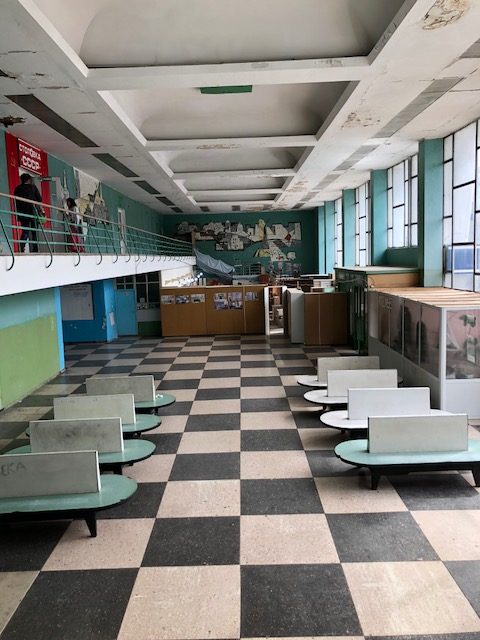 “They keep their ruble worth slightly more than the Moldovan leu,” our guide informed us, “a sign of their [insert air quotes gesture] ‘superiority.’”

After they declared independence from Moldova, the Transnistiran authorities adopted a constitution and hoisted a national flag. Today, citizens sing a national anthem and salute a coat of arms… again with the hammer and sickle. They also carry a Transnistrian passport, although it is not recognized for travel internationally. (For that, citizens carry either a Moldovan, Russian or sometimes Ukrainian travel document.)

Not long after the border crossing we stopped at a bus station in the city of Bender for some “traditional” food.

“It’s canteen-style,” dear guide declared, somewhat ominously. “It will give you a good taste of soviet cuisine.”

The Bender Bus Station is quite literally falling apart. The buses themselves are also falling apart. The terminal building recalls images of that other great communist state – Cuba – and its dilapidated Malecón, where grand old Spanish style villas crumble into an indifferent sea below. 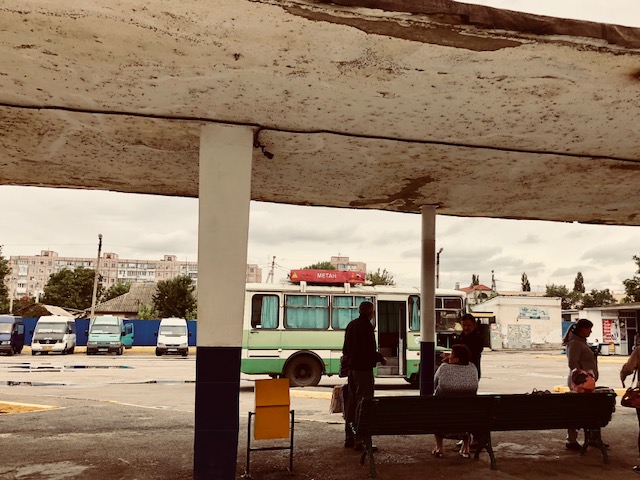 Inside the station, at the “USSR Canteen,” we grabbed a plastic tray and joined the line. Portraits of Marx and Lenin and Stalin adorn the walls. Red and yellow flags droop from the roof. An old television set played a movie in Russian that we couldn’t understand but that the other diners had long stopped watching in any case.

We managed to view quite a lot of the ‘country’s’ pomp and ceremony during our short visit. War memorials, local markets, hillside monasteries… and block after block of hideous communist housing projects and abandoned factories.

Some of the more rural scenes were quite pretty. Rolling countryside bathed in the golden, autumnal sunlight. Mostly, however, the scenes were tragic… full of the decaying remnants of a failed experiment into mass collectivization. 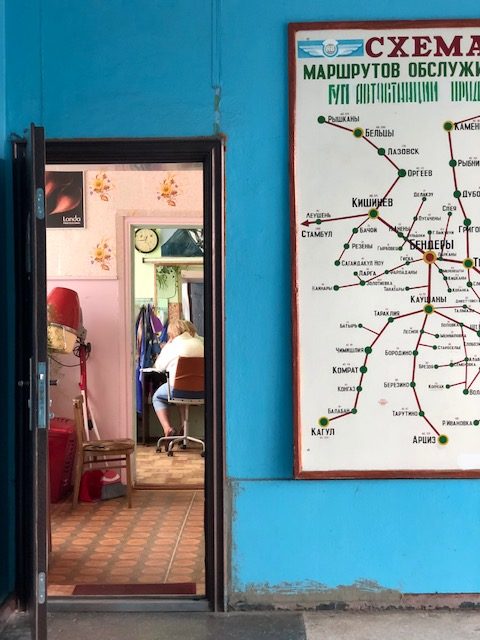 After a long day, we turned around to head back to Moldova. Of course, because they don’t recognize Transnistria as a different country, there is no need for immigration on the return run. We simply passed through.

Of all the strange realities that man has imagined into existence throughout the ages, political borders must surely rank up there as among the most incredible.

Along these borders man will march, in lockstep to the bars of one or another national anthem, military standard pointed to the heavens, rifle firmly in hand, at the ready to wound and even kill whomsoever decides to trespass on his imagined political perforation. 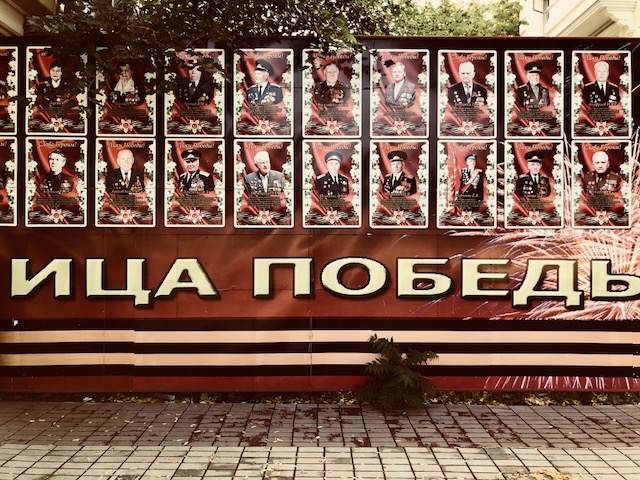 Considering the world as it exists before us – with its immense natural borders, for millennia impassable, its looming mountain ranges and raging oceans, its vast deserts of sand and snow – who would conclude that, indeed, a great network of political borders, designed to partition one group from the next, to collect them into buckets called nation states, more often at odds with each other than not, is the prudent, necessary recipe for peace and prosperity on this planet?

No sane individual could entertain such a notion. Of course, that in no way precludes insane groups of individuals (the so-called “mobjority”) from recognizing these borders and, what is more, warring over them to the death.

The border along the disputed autonomous zone of Transnistria, between Moldova and Ukraine, was no different. The people guarding it are deadly serious about the mission at hand proving once again that, even imagined realities can have real world consequences.

Of all the strange realities that man has imagined into existence throughout the ages, political borders must surely rank up there as among the most incredible.