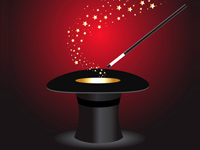 It could turn out to be “the largest real property forfeiture” in US history.

In a breathtaking move, the US federal government was recently given the “right” to seize (also known as steal) a 36-story skyscraper in midtown Manhattan worth an estimated $500 million to $700 million.

It naturally raises the question:

How on earth could the US government confiscate such an incredible amount of private property without so much as a whimper of opposition or critical press coverage?

It is because they said the magic word.

And when you consider the totality of the consequences of using this word, it is indeed like magic.

It is a word that has no fixed definition, yet potently justifies everything.

I am of course talking about the word terrorism.

Glenn Greenwald eloquently gives us the details on the T-word.

Glenn, as many of you undoubtedly know, is the journalist who worked with the courageous Edward Snowden to reveal the NSA abuses. He has called the word terrorism, “simultaneously the single most meaningless and most manipulated word in the American political lexicon.”

And he is absolutely correct.

So the word 'terrorist' for example is something that pervades countless political discussions of great significance. And we are essentially at the point, literally, where if the government points to somebody and simply utters the word 'terrorist,' and large numbers of citizens… will cheer for whatever it is that is done… No matter how lawless, no matter how little evidence has been presented to justify it, the mere fact that they have been labeled a 'terrorist' is something that will basically cause a majority of people to sanction whatever is done.

And yet what is so fascinating about the word 'terrorist' is that it really is a term that has absolutely no fixed meaning, it's simply a term that means whatever the person wielding it wants it to mean.

Terrorism has always been an ill-defined word.

In the past it used to mean something like indiscriminate attacks on innocent civilians by non-state actors for political ends—as if wearing a government-issued costume changes the underlying morality of the act.

Now, the label is being applied to an ever-widening group of people.

Take Bernard von NotHaus for example, who was labeled by the government as a 'domestic terrorist' for creating a private gold/silver-backed currency. Libertarians in general have also been described in similar terms by the government.

One of the many things that I have learned from Doug Casey is the importance of using words properly. Imprecise and sloppy usage of words leads to sloppy thinking.

And there is nothing that leads to more sloppy thinking than the word 'terrorism.'

Speaking of Doug Casey, he wrote an excellent, in-depth, and must-read white paper on this exact topic called “Learn to Make Terror Your Friend”—only available to subscribers of The Casey Report.

Because the word terrorism is so potent and shuts down all debate, the mere application of that label by the government, anonymously and with no evidence… has made huge numbers of people stand up and cheer the most radical power a government can seize, which is the power to target one's own citizens for death, for assassination, in total secrecy and with no due process. And that to me really illustrates the potency of how these propagandistic terms are wielded….

If we're really going to vest virtually unlimited power in the government to do anything it wants to people they call “terrorists,” we ought at least to have a common understanding of what the term means.  But there is none.  It's just become a malleable, all-justifying term to allow the US government carte blanche to do whatever it wants.

It's really more of a hypnotic mantra than an actual word.

Now let's get back to “the largest real property forfeiture” in US history, which was made possible by uttering the magic T-word.

The property in question is a 36-story skyscraper in midtown Manhattan. At 650 Fifth Avenue, at the corner of 52nd Street to be precise. 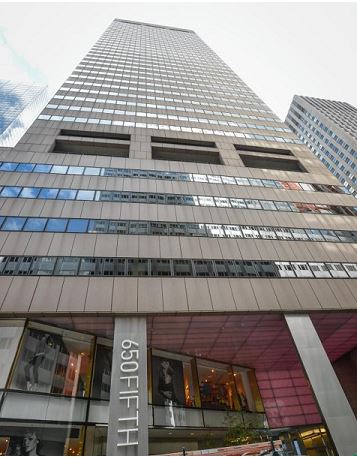 The 382,500 square-foot building was constructed in the 1970s by a foundation set up by the Shah of Iran. After the Iranian revolution threw out the US-backed dictator, that foundation would eventually be succeeded by the Alavi Foundation, which is a non-profit organization that promotes the Persian culture and language.

The reason the building is being seized is because of alleged and flimsy links to the government of Iran. The US government alleges that that rental income from the property was “laundered” and eventually sent to Bank Melli in Iran.

Bank Melli is a state-owned bank. The US government has decreed that the government of Iran is a state sponsor of “terrorism.” Therefore, Bank Melli is deemed an instrument of “terror,” since it is owned by the Iranian government. Despite the fact that it is the country's largest commercial bank with over 3,300 branches and 43,000 employees and is widely used by average Iranians who have nothing to do with the government.

The judge presiding over the case has stated: “Having engaged in a money laundering violation, the entirety of the 650 Fifth Avenue Building (the business premises) and all of the associated bank accounts are subject to forfeiture—even if they were not used in the money laundering offense itself.”

Astoundingly, the US government does not even have to prove these allegations or the merits of their evidence to a neutral jury. They effectively can just accuse and seize… even if it's a massive skyscraper.

All they have to do is utter the magic T-word, and any concept of private property rights and due process magically vanishes.

It is reminiscent of how US property was confiscated by the Castro regime in Cuba following the revolution. Or any other countless examples of how governments throughout history have seized the assets of their perceived enemies under various pretexts.

Not surprisingly, the US government is not consistent in the way it deals with asset forfeitures and the T-word. Take, for example, John McCain, who has arguably given material support to Syrian rebels who have links to Al Qaeda. I highly doubt we will be seeing John McCain's residence and bank accounts seized.

At this point it should be abundantly clear there is no such thing as due process or the rule of law in the US anymore; rather, Americans live under the whims of the government. Not so different from Russians living under the whims of Putin.

This is what political risk is all about. And why you need to diversify internationally.

When your government starts arbitrarily seizing skyscrapers, the time to start thinking about and devising an internationalization strategy was yesterday.

If you have not already started, I'd suggest that it is high time to get going. This goes double for libertarians and anyone else who could one day become the government's next enemy du jour.

All the government has to do is say the magic T-word, and poof: your rights, your assets, and even your life can be taken from you in an instant, without due process, and the vast majority of people will approve of it.

When you consider the power and hysteria surrounding this word, combined with its lack of fixed meaning, magic is about the only way to describe it.

It could turn out to be “the largest real property forfeiture” in US history, and it was made possible by uttering this magic word.