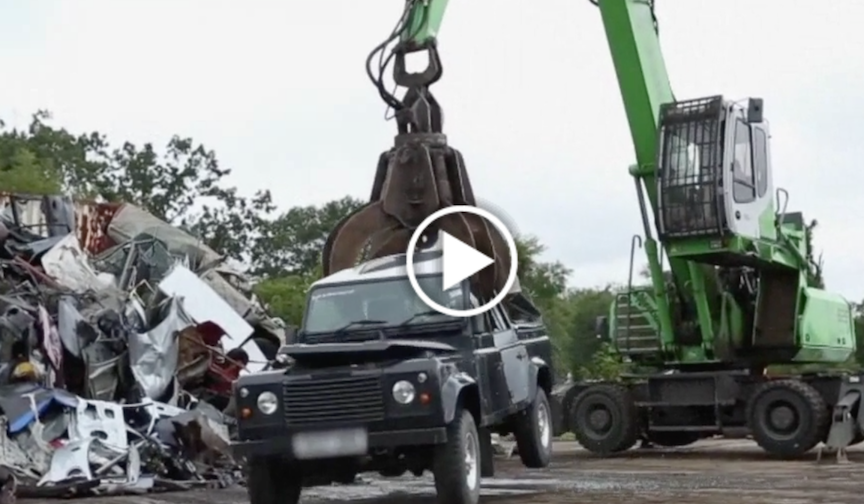 Last month I flew to Spain with my friend Fadi Garcia to buy a Land Rover Defender 90.

When he first told me about the trip it didn’t make any sense. I’ve seen plenty of these vehicles in the U.S. I agreed with him that it’s a classic. I wouldn’t mind having one myself. But why fly to Spain?

After he showed me this video posted by the U.S. Customs and Border Protection I decided to tag along.

As you can see in the video, Customs Officer Hunt is all smiles as the beautiful Land Rover Defender behind him turns into a worthless pile of metal at a government scrap yard. That’s a $100,000 car he just mutilated (Defender 110). As he says, “It’s worth about $30 now.”

I encourage you to watch the whole two minute video. Pay close attention to some of comments he makes. He really believes his enforcement work makes the U.S. safer.

The government depends on these types of non-thinkers. Only a nitwit would spend his entire career enforcing endless technicalities. 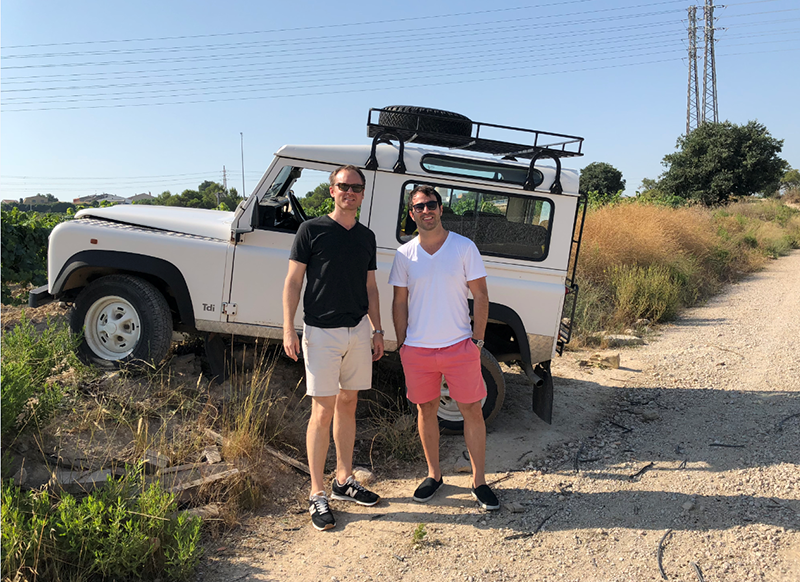 E.B. and Fadi taking the Defender for an off road test drive in Vilafranca del Penedes, Spain

Why The Government Doesn’t Want You To Have This Car

Land Rover introduced the original Defender in 1948. Back then The Rover Company called it the “Series I.” In the aftermath of World War II the British company saw demand for a product similar to the U.S. Willys Jeep.

While iconic, the Willys Jeep is actually a piece of crap. I sat in a fully restored one recently. I don’t see how they even survived in use, much less in combat.

The Land Rover Series I however is a fine piece of machinery. The same goes for an authentic, non-U.S. Defender. It’s as close to indestructible as any vehicle I’ve seen.

Land Rover did make a U.S. model for several years. It’s a gas-powered V8 instead of a reliable diesel. Built to satisfy regulators the U.S. model was prone to constant mechanical trouble. The imported model however was built to keep you alive during remote transit.

If you’re well-traveled you’ve seen these all over the world. They’re common service vehicles in the U.K. They’re about the only thing you want to use for Safari in desolate parts of Africa. People trust the Land Rover Defender for its simplicity and reliability.

A “safe” car according to U.S. law is one that adheres to DOT and EPA mandates. On the surface that sounds like good thing. The last thing we want is dangerous, mechanically-unpredictable vehicles running wild on our roads. But that’s not what the U.S. regulations do. In truth they limit your choices in the name of safety. The actual beneficiary is the automotive industry.

In 1988 Congress passed a restrictive law limiting vehicle imports to a very narrow scope. An extensive list of prohibited features prevents many of the world’s most popular cars from touching U.S. soil.

Mercedes lead the lobbying effort to get the 1988 law passed. The second hand auto industry calls it the “Mercedes Law.” It keeps scores of BMW, Volkswagen, Land Rover and other models common in many developed countries out of the U.S.

The Land Rover Defender pictured above is “unsafe” because its 5-cylander Tdi diesel engine does not meet smog standards. It does however meet E.U. and Canadian standards proving that the U.S. law is a technicality.

There are other features Officer Hunt points out as problems. The battery casing is in the wrong place, the back seats run front to back for utility purposes…..not good enough for America.

I’ll decide what’s safe and what isn’t. An overbooked rental car company stuck me in a Chevrolet Cruz recently. I’d take the unsafe Land Rover Defender over that aluminum coffin any day.

How To Legally Skirt The Law

There is one way around the law. Officer Hunt mentions it in the video.

Once a prohibited car is 25 years old the Customs Bureau offers importers an antique exemption. 24 years and 364 days old and Officer Hunt shreds it. One day older and he deems it roadworthy. Go figure.

Fadi found the Defender pictured above for sale online. A small dealer in Vilafranca del Pendes Spain had it listed. It’s a town about one hour southwest of Barcelona.

Last year on a trip to Norway Stephanie and I met a lawyer from Barcelona and we kept in touch. He was vacationing with his family at our hotel. The small boutique was the set of the movie Ex Machina. With only 8 cabins it’s impossible to avoid getting to know the other guests.

Turns out my lawyer friend’s brother heads up a Barcelona-based Land Rover enthusiast club. He helped us check out the car before the trip to make sure it was real. At a list price of €9,600 (about $12,500) the car was a serious deal. In the U.S. an imported Defender 90 in good working condition costs roughly of $50,000.

The only issue with the Defender we found was it’s a 1994. That means it does not qualify for import. We asked the small town dealer if he’d store the car and drive it occasionally until its 25th birthday next year. He agreed.

A Few Days In Spain

While Fadi took care of the paperwork I looked around Vilafranca. There’s not much going on. I got the sense villagers wouldn’t mind going back to the economically challenged Spain of the 1980s. 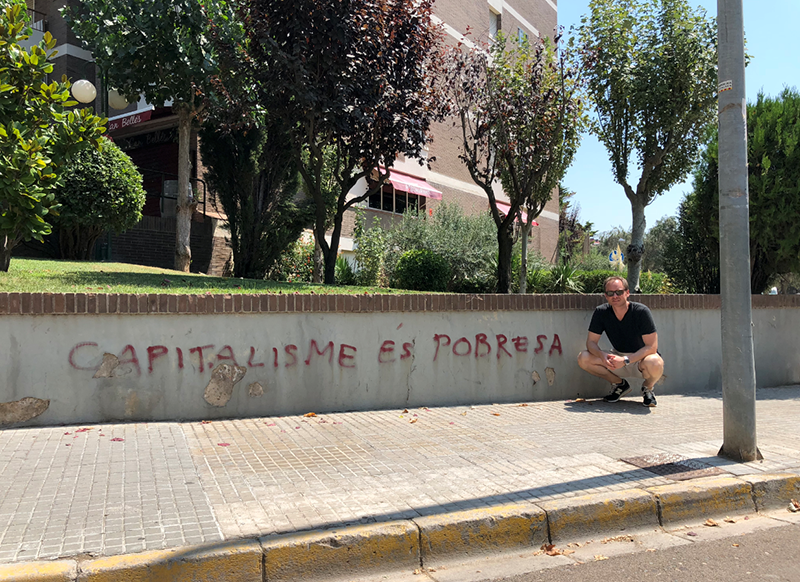 If you’re up on recent history it’s clear the euro did a lot for Spain. While I’m no fan of bureaucracy, if I was Spanish I’m not sure I’d beg too loudly for the peseta.

The car transaction went faster than anticipated leaving us a few days in Barcelona. We stayed at a fantastic smaller hotel called Monument Hotel on Passeig de Gracia. It’s one block off the much quieter northern section of La Rambla.

We also spent a few hours at the Mies Van Der Rohe Pavilion. The German modernist architect designed and constructed the building in 1928 for the Barcelona International Exposition. Two years later they disassembled and removed the impeccable structure. In 1986 a group of architects reconstructed a replica. If you visit Barcelona consider touring the building. Spend some time sitting quietly in its well thought out spaces. The admission fee is €5. 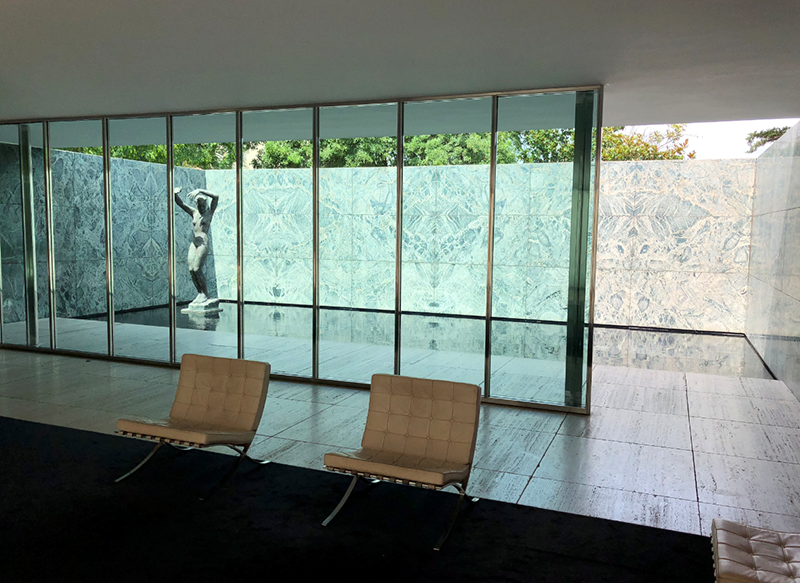 So far it seems the main purpose of the trip was a success. It will be close to a year before the Defender rolls, under its own power, onto a cargo ship and departs for the Jacksonville, Florida port.

At the U. S. port dozens of overzealous Customs officials will examine every inch of the fine machine to determine if it’s “safe” for U.S. operation.

As European governments become more desperate to find ways to attract wealth and investment to their nations – having squeezed their own citizenry dry (and illustrating exactly why those born into any seemingly prosperous nation should still diversify internationally, as when things turn bad they often do so quickly) – they are increasingly opening the doors to foreigners with a little extra cash.