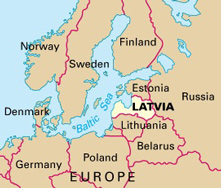 Latvia has recently been dubbed “a Luxembourg for the poor,” a reference to the latter’s role as a popular offshore jurisdiction.

Although the phrase originally came from a misguided anti tax haven group, there is some truth to it; Latvia is set to transform itself into an offshore jurisdiction due to favorable developments.

Recently, the European Commission gave the final approval for the Baltic country (a former Soviet republic bordering Russia) to become the Eurozone’s newest member. Starting in January 2014, Latvia will become the 18th country to use the euro as its currency.

While Latvia had some financial troubles in the past (in 2008 it needed a bailout loan from the EU and IMF), the country does not appear to be in any imminent danger now. Unlike other troublesome Eurozone countries, the bank balance sheets in Latvia were equivalent to only 128% of the country’s GDP (versus the EU average of 359%) as of the end of last year.

And it’s not just the currency that is changing in Latvia starting in 2014.

There will also be new favorable tax laws that will allow the country to compete with other Eurozone members that have traditionally been popular offshore jurisdictions, like Cyprus, Ireland, and Malta.

Another aspect that could make Latvia an attractive offshore destination is its rules surrounding holding companies.

Holding companies are created only for the purpose of owning and investing in other companies – they usually do not produce goods or services. Warren Buffett’s Berkshire Hathaway is an example of one.

Holding companies in Latvia are not taxed on foreign dividend income or stock sales, and transferring these untaxed profits out of the country is also not taxable.

The tax law changes that come into effect in 2014 will further benefit Latvian holding companies by eliminating the taxes on interest and licensing fees paid to foreign companies. Holding company structures are already popular in the Netherlands, Cyprus, Malta, and Ireland, but come 2014 Latvia will be the country in the Eurozone that offers the most advantages.

Editor’s Note: Below is a diagram from Wikipedia that shows the members of various groups of European countries. If you are not familiar with the flags, you can go to this link and hold your mouse over a flag and it will tell you which country it is. 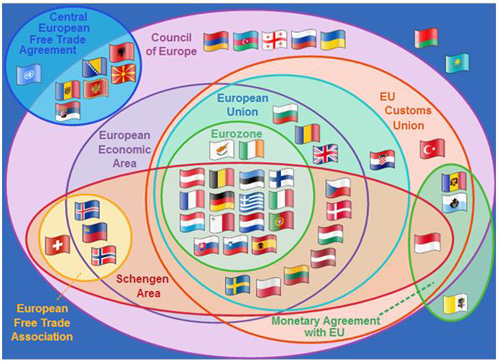 Latvia is also expected to become an attractive banking center and gateway to the EU economies for Russia and other non-EU former Soviet states, such as Ukraine, Belarus, and Kazakhstan, among others.

This is due to Latvia’s proximity and deep connections to Moscow; 25% of Latvia’s 2 million people are ethnic Russians.

Many individuals and companies in Russia and the non-EU former Soviet states are keen to move their savings outside of the immediate reach of their desperate – and often thieving – home governments.

This concept of internationalization to diversify political risk is not just for people and companies in former Soviet states, of course. It is a universal concept that is applicable to everyone in the world – double for those who live under the thumb of bankrupt western governments.

While Latvia may not fit into your internationalization game plan, its expected transformation into an offshore jurisdiction – and those who would use it – offers an instructive lesson.