One the most self-destructive—but predictable—things a bankrupt government can do is impose capital controls.

Capital controls are simply restrictions on the free flow of money into and out of a country. To my knowledge, they have never solved the underlying economic problems, and in fact make them worse.

But politicians inevitably turn to them because they seem like a quick fix. Doing so also allows them to avoid making the politically difficult decisions of addressing the root causes of why money is fleeing the country in the first place.

It’s like thinking you can cure a poison ivy rash by scratching it; it might feel good at first, but all you’re doing is making the situation worse.

I recently had the chance to experience firsthand one of the most infamous examples of capital controls when I visited Argentina.

Capital controls come in a variety of flavors. The way the Argentine government clumsily tries to control capital is by decreeing what the value of the peso should be in terms of US dollars with an “official” exchange rate. The official rate is always unfavorable compared to the black-market rate (i.e., the free-market rate, or the blue rate as it’s locally known) when converting dollars to pesos.

In reality, the difference between the black-market rate and the official rate amounts to a wealth transfer from you to the Argentine government. It’s a form of implicit taxation.

Anybody exchanging dollars for pesos at a rate other than what the Argentine bureaucrats have declared by fiat is technically breaking the law. But of course, breaking some inane law cooked up by criminal politicians and committing a real crime (aggression against people or property) are two completely different things, but that’s a story for another day.

The fact of the matter is that pretty much everyone in Argentina breaks the law to avoid the official exchange rate. Even leading newspapers publish the black-market rate daily. In my view, this disrespect for stupid government policies is healthy and desirable.

Now, there is an upside to this economic madness. The capital controls help keep Argentina incredibly cheap—so long as your income and assets aren’t denominated in pesos and you obtain pesos at the black-market rate.

This is exactly what speculating is all about: taking advantage of politically caused distortions in the market—like capital controls.

This dynamic helps explain two areas where Argentina really shines: 1) lifestyle residency; and 2) a compelling crisis market to speculate in.

A Quality of Life Hard to Beat

Argentina really feels European in many ways. Unlike its other South American neighbors, it’s primarily an immigrant country where most people trace their roots to Italy, Spain, and other European countries. Combine this with the extremely low cost of living and it feels like living in Italy for about one-tenth the price. In my extensive travels around the world, I haven’t seen a country that has such a high quality of life at such a low cost.

As most readers are aware, my colleagues Doug Casey and David Galland have created a world-class residential community in Argentina—La Estancia de Cafayate. I had been reading about La Estancia for many years and naturally had high expectations. Recently, I made my first visit, and even my high expectations were blown away. I can honestly say that it was not only as good as David and Doug have described, but better. Both La Estancia and the region are up and coming and have a very bright future.

For anyone looking to plant their lifestyle residency flag, Argentina and La Estancia de Cafayate in particular are hard to beat. I have much more to say on this topic in a recent interview I did with Albert Lu of The Power & Market Report who was also visiting La Estancia. 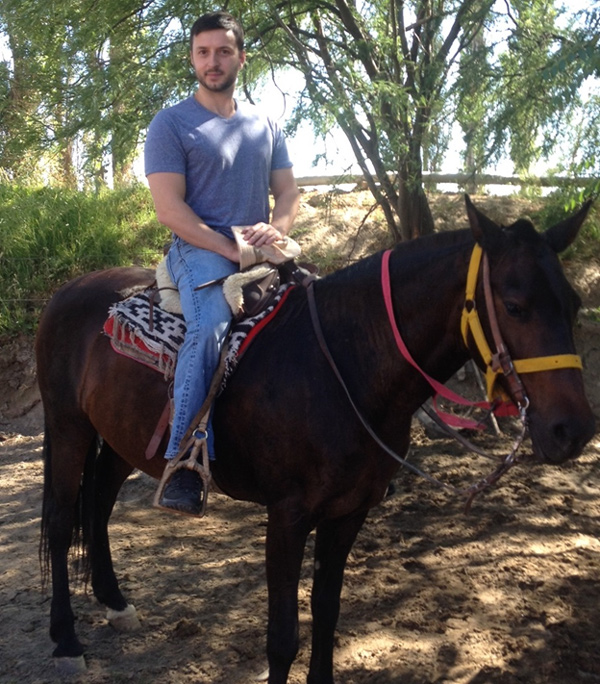 Nick Giambruno getting down to business at La Estancia de Cafayate

One of the main draws of Argentina is how cheap everything is. I had dinner at one of the best restaurants in Buenos Aires—drinks, appetizer, a large and delicious steak, and dessert—all for less than $20. I would have paid well over $100 for a comparable dinner in New York City. This pricing dynamic is also at play with publicly traded Argentine companies. And that leads us to the other reason why you should be paying attention to Argentina.

Listen to the mainstream media, and I doubt you will hear anything positive about Argentina. After its recent sovereign debt default (the eighth time in its history), The Economist labeled Argentina a “financial rogue state.”

While it’s certainly true that Argentina has had some serious economic mismanagement, that isn’t the complete picture. There are reasons to be optimistic over the intermediate term. Namely, the current government of Cristina Kirchner is on its way out, and the incoming government will almost certainly be less inept economically. Argentina also has the third-largest shale gas deposits in the world and world-renowned agriculture and cattle. And then you have certain Argentine stocks trading at very compelling valuations.

It’s just the sort of cocktail of factors—a market hated by the mainstream financial media, identifiable positive fundamental catalysts, and dirt-cheap valuations—that I’m looking for in Crisis Speculator. I’ll show you exactly how you can get in on the action in an upcoming issue.