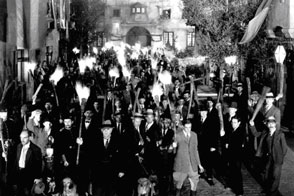 It has been said that democracy is nothing more than mob rule dressed in a suit and tie.

It only takes 51% of the people to agree to restrict the rights of the rest of the 49%.

And with nearly 50% of the people in most Western countries living off the government dole in some fashion, we are about to cross the Rubicon if we haven't already.

The mob usually has little concern for the rights of individuals not included in it.

In perhaps a preview of what is to come, the EU has agreed to move forward to cap the bonuses for bankers – a dangerous new precedent. The salary limits would be applied to both bailed-out and non-bailed-out EU banks, regardless of where a particular branch is located, and possibly also the branches of foreign banks located in the EU.

The mob was justifiably angry at the government bailouts of the large financial institutions. This public anger helped pressure the EU politicians to “do something.”

When governments “do something” it invariably means grabbing more power and doing the exact opposite of what it should do. Rather than letting the banks fail, the EU politicians bailed them out and granted themselves more control.

Giving any politician the ability to limit salaries is a slippery slope, one the EU bureaucrats are already heading down. Now that the precedent has been established with banks, there are already additional proposals in the EU to extend salary restrictions to hedge funds and private equity firms. One doesn't have to be particularly perceptive to see where this is going.

Imagine if gold were to explode to the upside, perhaps to $5,000 an ounce in a matter of weeks. Consider the political and social implications that would bring. Is there any doubt that the mob would demand (and probably get) a “windfall profit tax” or something similar in the name of “fairness”?

As their financial situations further deteriorate, the EU, the US, and the West in general are headed down the same road.

The window of opportunity to internationalize and insulate yourself from the will of the mob is still open, but verifiably gets smaller with each passing week. At a bare minimum you should have some gold or some of your savings stored outside of your home country. Now is the time to start developing your options and your internationalization game plan.