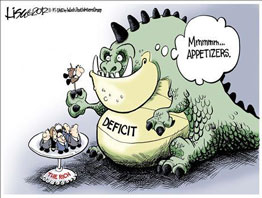 Another week full of examples of governments around the world putting the squeeze on their citizens.

The primary motivation for this is to feed the government's insatiable appetite to spend money, which certainly isn't going to decrease in any significant amount in the foreseeable future – at least in the US.

As Rand Paul points out, the upcoming potential sequester only makes a meager cut to the rate of growth of government spending and does nothing at all to actually cut the baseline levels. It should be abundantly clear there is no political will to make any meaningful cuts anytime soon.

We cannot realistically expect change to come from the political system – both parties are firmly committed to the policies that necessitate massive and growing spending.

This means the government will have to find more ways to extract wealth in order to finance this spending using its favorite tools of inflation, debt, and taxes. Until these tools reach their limits (and they haven't yet) we should expect their increased use.

In the US it seems that each week brings a new proposal or scheme. Recently we have the return of the odious online US sales tax in the form of an Orwellian-named bill the “Marketplace Fairness Act of 2013.” You'll find more information below.

It is unfortunately very clear what direction this worldwide trend is going. It is only prudent to expect continued and escalating measures – and to take action to counteract them while you still legally can.

The International Man site and network are here to give you the information you need to internationalize to better insulate yourself and your family from the inherent dangers of political risk.

Sign Up here to join for free and get the IM Communiqué delivered to your inbox.