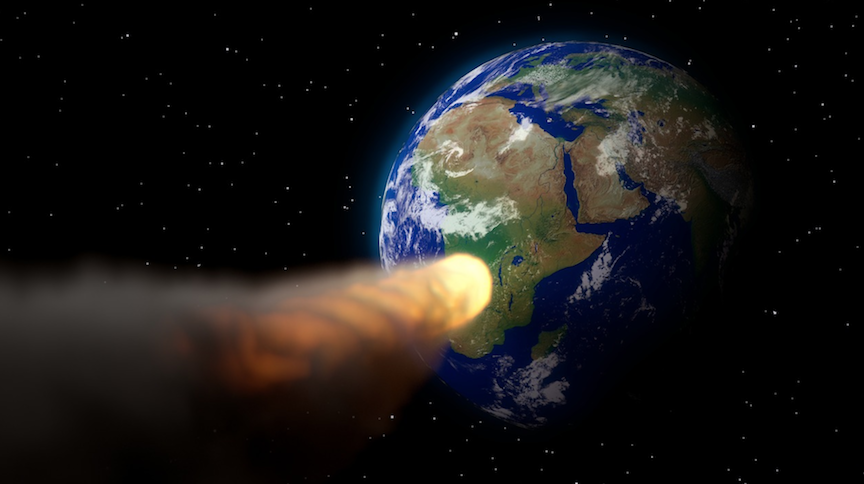 It was a short, almost random, meeting.

I’d stopped in San Francisco on my way to South America. The goal was mainly to visit a friend in the hedge fund industry, just to say hi and check in.

I wasn’t expecting to talk about natural resources. This friend runs the kind of fund that invests in manufacturing companies or real estate—the kind of person for whom mining is a vague footnote in the world of business.

But I was wrong. When I met my friend, all he wanted to discuss was mining.

We sat down in his plush office in the Ferry Building overlooking the Bay. He told me that he was looking at mining projects around the globe—and was focused on one relatively obscure metal.

I was shocked. My friend had clearly been dedicating all of his considerable brainpower to analyzing the mining business and mining stocks—for the first time ever in his long and successful career.

In between his excited tirades about the potential for this one particular metal, I probed to find out what had fired him up so suddenly.

He said simply, “Elon was talking about it.”

That, of course, meant Elon Musk. It turned out that my friend had seized onto an offhand comment by Tesla’s CEO during an interview—which he believed signals a revolution coming for one badly needed metal in the electric vehicle (EV) industry.

During this interview, Musk said that he wants to add 33% more of this metal to each Tesla vehicle battery. The move reduces manufacturing costs overall for its batteries—but creates a huge new source of demand for the commodity I’m talking about.

That intrigued my friend. Even though he’s not a mining investor, a 33% increase in demand in any market is enough to tweak his radar into looking for big investment opportunities.

“You need to hear this,” he said. He called in one of his coworkers, an analyst who specializes in both U.S. and Chinese markets.

The fellow joined us to talk about how he’d just been on the phone with Tesla. During the conversation, the Tesla reps noted that they’d created an entire position within the company dedicated to identifying supplies of this game-changing metal around the world—and making sure that Tesla had access to enough to feed its battery mega-factories.

Then, he turned the conversation to China.

“Every company I talk to is following Musk’s lead,” he said. He’d been digging in with Chinese manufacturers of EV batteries, and found they were all executing similar plans to Tesla—upping the amount of the same metal in configuration with their batteries.

“It’s happening,” he said. “Not five years away— but right now.”

I left feeling extremely encouraged. When big, mainstream investors are suddenly getting excited about a small corner of the commodities world like this, it can drive huge gains in metals and the associated stocks. It happened with uranium in 2005 and 2006, when hedge funds started buying—and drove metals prices from $20 per pound to $140.

So what is this particular metal?

• Nickel needs to be on your radar today…

The metal flashed onto a lot of investors’ radars when Musk said that the batteries used in Tesla’s EVs are really reliant on nickel, and to a lesser degree, graphite.

That comment galvanized people like my friend in San Francisco, especially when Musk said that he wants to add as much nickel as he can to batteries going forward.

Specifically, Musk wants to add 33% more nickel into each battery, coming at a time when overall demand for EV batteries is going through the roof.

Between 2014 and 2018, worldwide battery manufacturing for EVs more than doubled, rising 150%. That’s an incredible rise. But what’s happening today is even more shocking: By 2020, global battery output is expected to double again.

And it doesn’t stop there. Projections are that, between 2020 and 2037, global manufacturing of batteries for EVs and other new energy applications will rise ten-fold.

Remember, nickel is the primary input for many of these batteries… and Musk is leading the charge to put 33% more nickel into each and every EV battery.

Here’s the kicker as to why this could be the perfect setup for nickel and associated mining stocks.

• Nickel is a particularly difficult metal to find…

Unlike gold or copper, which are more or less the same wherever you find these metals on Earth, nickel has distinctly different forms in different places on the planet.

About 60% of known nickel resources are in a form called “laterite.” It’s a kind of crumbled rock that forms in tropical countries, where heat and rain chew up the landscape.

The thing is, nickel laterite is not suited to making batteries… and converting it into the nickel sulfate end-product that battery makers need requires specialized processing facilities which cost billions of dollars to construct.

What battery manufacturers really need is a rarer type of nickel known as nickel sulfide. Nickel sulfide deposits come with a chemistry that’s much easier to convert into input products for batteries.

But there’s a catch. Nickel sulfide is only found in a few places on the planet. The biggest source is the Sudbury District in eastern Canada—a geological freak of nature that geologists believe was created when a giant asteroid smacked into the Earth there, melting the crust and creating huge nickel sulfide deposits.

• As you can imagine, that kind of unique circumstance doesn’t pop up in many places…

Western Australia is a significant producer of nickel sulfide. But aside from Australia and Canada, the only other place on Earth with big nickel sulfide deposits is Russia—a source that could be cut off from the rest of the world by international sanctions.

So we have a hard-to-find metal, with one of the world’s largest supplying countries potentially being lost to most buyers—at the same time that demand is set to explode. The chart below shows what this means for the market. 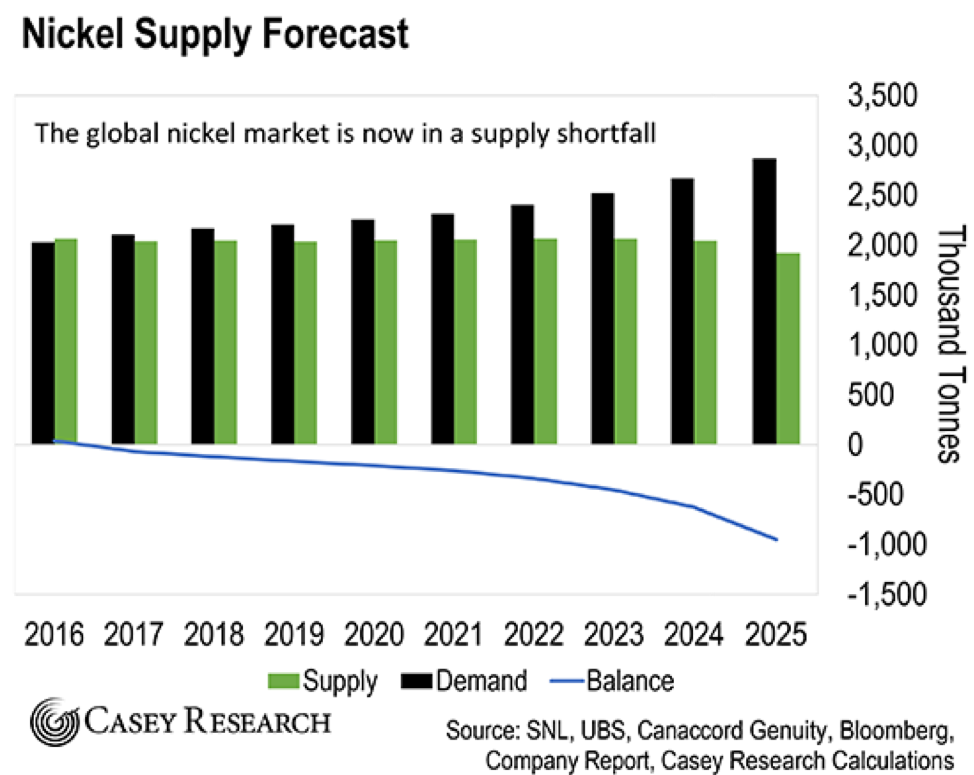 Today, there is already a shortage of nickel. There just isn’t enough nickel being mined globally to meet demand.

You can see how demand (black bars) is running ahead of supply (green bars)... and the shortfall is going to deepen as the EV market continues to grow.

And going forward, the situation gets even more dire. There simply aren’t many new mines on the horizon that can meet the surging demand for nickel in batteries—especially as people like Musk cram even more of this metal into each unit.

That supply crunch means the potential for big runs in the nickel price—the kind that will cause a spike for nickel stocks.

If you haven’t already, now is the perfect time to add some nickel exposure to your portfolio.

P.S. Nickel is just one of the big trends on my radar today. There’s another major story that no one’s talking about right now…

You see, President Trump just quietly signed what may go down in the financial books as his most significant executive order. The ultimate goal? To identify and unlock over 1 million tonnes of a new “super-fuel” on U.S. soil.

It’s called “Brandt Oil,” and it’s quickly becoming the new oil standard. And it’s opening up a rare opportunity to bring incredible wealth to you and your family—but only if you get in at the ground floor stage we’re at now. Click here to get all the details…