Moving your savings, in one form or another, outside of the immediate reach of your home country is a crucial component of diversifying your political risk. Perhaps the most common way this can be achieved is with a financial account in a foreign country. Though they are not typically thought of as popular offshore jurisdictions, this article explains why countries and specific banks in Scandinavia deserve your consideration as safe and reliable places to stash some cash abroad.

The information in this article is based on the author’s personal experiences and has not been independently verified. As always, do your own due diligence.

That's both right and wrong. The Scandinavian countries include Denmark, Norway, and Sweden (and sometimes Iceland, the Faroe Islands, and Finland). They are not offshore financial centers, nor do they offer the strictest financial privacy, though they all have some degree of banking secrecy by law. However, they are “offshore” from the perspective of anyone outside of Scandinavia. 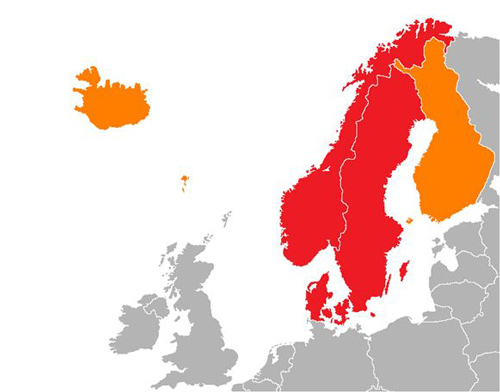 Why Bank in Scandinavia?

Why would you consider banking in Scandinavia? A few reasons:

The top reasons to bank in Scandinavia are its financial stability and independence. With neither Denmark, Norway, nor Sweden being tied to USD or EUR.

They certainly trade a lot with the eurozone, but the Danish, Norwegian, and Swedish currencies have remained strong throughout the recent financial crisis. Finland, despite being a eurozone country, has also remained stable.

Sweden had a financial crisis of its own, from 1990 to 1994. One bank was socialized but later privatized and became Nordea.

No bank in Scandinavia has gone bankrupt and left customers stranded without money. The governments have traditionally left it to the banks to solve their own messes but have stepped in only when absolutely necessary.

They are, however, exposed to the Baltic countries (Estonia, Latvia, and Lithuania), whose finances took a tumble in the ongoing financial crisis.

How to Bank in Scandinavia

In terms of day-to-day needs for banking, Internet banking is extremely well-developed in Scandinavia, which is reliable and highly functional.

However, a foreigner will face two major obstacles:

1. Internet banking is not always available in English.

2. Banks are often reluctant to deal with non-residents.

There is not much of a solution to the first problem. You will either need to find a bank with English Internet banking, use a translation tool, or figure it out.

The second one is all about internal policies. There are no laws that forbid foreigners from banking in the Scandinavian countries, but banks are very reluctant to do so. Banks in Denmark, Norway, and Sweden have a low-risk profile, and non-residents are considered risky customers.

However, everything in this world has a price. To open a bank account in Scandinavia as a non-resident foreigner, it usually requires a minimum and/or initial balance of at least 1 million SEK/NOK/DKK (between $150,000 and $180,000 USD at current exchange rates). That said, minimum balances and initial deposits are almost always negotiable.

Below is a list of some of the major banks in Scandinavia: 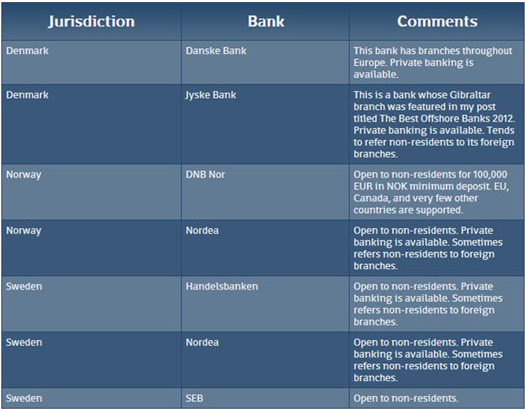 Norwegian legislation requires that all bank account holders have a Norwegian ID card number. Banks that are open to non-residents will usually handle the application process for you. The ID card has limited usage outside of Norway. It does not grant you residence. All non-resident accounts are reported to the tax authority.

In short, there is no secrecy that protects you from snooping authorities. Assume that the tax authorities know about every transfer you make.

Banking staff is, however, forbidden from disclosing any information unless compelled by law. Civil cases are not always enough to break the banking secrecy.

The banks and jurisdictions have excellent credit ratings; your funds are unlikely to suddenly disappear like what happened in Cyprus.

However, no banking solution is perfect. Always be cautious and always exercise due diligence.

The Economist – “The Nordic countries: The next supermodel“

The Economist – “The secret of their success“