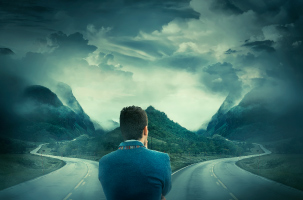 Earlier this year I wrote an email to several friends, describing my feelings upon arriving at a crossroads for myself and my work. Surprisingly, nearly all of them wrote back that they were feeling the same thing. And so I think a lot of us have arrived at some type of crossroads lately.

How and why we feel to be at a crossroads is a very personal thing of course, but I think I see two reasons that have gotten under our collective skin, so to speak.

1. Saying goodbye to the 20th century.

Many of us are recognizing that the 20th century – the era in which we formed our images of the world as well as our strategies for dealing with the world – is inevitably vanishing.

The 20th century model of almost everything held on for a long time after the year 2000. Much of that can be blamed on the 9/11 event, which froze the previous era’s assumptions inside a wild array of institutions. But that is finally fading, and the 21st century, especially to us of a certain age, is the stuff of fiction… except that it’s here. It will be different, and the assumptions that work within it will be different.

Even for young people, the assumptions of the 20th century ruled entertainment, politics, and much more… and those are starting to fade as well.

2. An improved world may finally be possible.

The children of the 1960s and 1970s saw the need for a better way, but attaining such a thing was beyond their grasp. The communes failed. Drugs were of temporary benefit at best. And if sex could have solved humanity’s problems, it would have done so thousands of years ago. The system won, and they needed jobs. They lost faith that politics could be transcended.

And now… hesitatingly, almost grudgingly… we’re seeing that we may not have to continue pretending the system is the best of all possible worlds.

Almost impossibly, we see the pieces of a new world replacing the old. Politicians are recognized everywhere as liars and thieves, and monetary systems are broadly recognized as a social control. Political orders are fraying, European democracy is turning ugly, free speech is being overtaken by mega-corporations married to political power.

But more than all that, the Internet connected billions of us to a common medium. I don’t think we’ve remotely felt all the effects of that. On top of that, we got encryption, impregnable defensive walls for a new era. Then we were gifted decentralized currencies (which are actually much more than currencies), new models of organization, a new era of biology, a new era in education (homeschooling, Kahn, etc.), with something new arriving every year.

Yes, Bitcoin and all it spawned are portrayed almost as wrongly as possible, but they don’t go away.

The Silk Road was taken down. Ross Ulbricht was given a show trial and condemned to death in prison. Charlie Shrem spent a couple of years in prison for almost nothing at all. And the result of all this was that the new economy… the new world… did not lay down and die. Bitcoin continues, new currencies abound, new markets and better markets abound, and almost no one ran away in fear.

Furthermore, the new way already has its first heroes and martyrs: Assange, Manning, Ulbricht, and Snowden, all punished by a corrupt old regime for crimes like telling the truth and promoting voluntary commerce. They even have a legendary figure in Satoshi Nakamoto.

The Challenge to Us

Shocking though it may be, the famed “long run” may actually be arriving, and the page may in fact be turning. And that is troubling. Talking about it is one thing; facing it in the real world is something else.

And if the page really is turning, we’re the people who’ll have to write that new page… with our actions. That’s a very good reason to feel like you’re at a crossroads, and I think that explains a good deal of what so many of us are feeling.

But if that’s what’s happening, let’s rise to the occasion and make it something great.