Nicaragua is probably the most interesting country in Central America right now.

This is why I am thrilled to bring International Man readers the perspective of Sean Dennis. Sean is a true expert on Nicaraguan real estate; he’s lived and worked there for over eight years and is perfectly suited to give us the exciting story of what’s happening on the ground.

Before we dive into this interview, be sure to check out this article if you haven’t already, for an overview of the attractive opportunities that Nicaragua offers.

Nick Giambruno: Tell us why somebody should consider Nicaragua instead of Panama, Costa Rica, or other Central American countries.

Sean Dennis: The quality of life and cost of living are amazing. You can live a very good lifestyle on like $1,000 a month—in fact you could probably spend less. In places like Panama or Costa Rica, it’s much more Americanized. A lot of that is now reflected in their American prices because they’ve been able to charge higher prices for a longer time. Here in Nicaragua, they haven’t quite caught on to that yet.

Nicaragua is probably one of the last places where you can mix with the locals a lot. You’ll never meet a nicer person than a Nicaraguan. They’re such a friendly people and no matter whether they have everything or nothing, they’ve still got time to help you. And I haven’t felt that in many other places that I go to.

It makes a big difference. For example, if your car breaks down in the middle of nowhere, these guys will all stop and help you fix it. It’s a real camaraderie—there’s no animosity between foreigners and locals here. They embrace people coming in.

Also, a lot of the products that you eat when you come down here are tremendous fresh fruits, vegetables, and fish. You can eat everything that’s been caught or grown within a mile or two of where you’re eating it. There aren’t many places like that in the world anymore.

Nick: Why don’t you briefly go over the main areas that would be of interest for expatriates?

Sean: San Juan del Sur is the main area of interest for expats. The city has its roots in a small fishing village on the Pacific coast. That’s, I think, what a lot of people like about it. It’s not a town which has come from nothing, or it’s not just foreigners who have come in and built it up. Without foreigners, it’s a functioning small fishing village, and it has grown around that. There are beautiful cliffs, hills, and beaches. 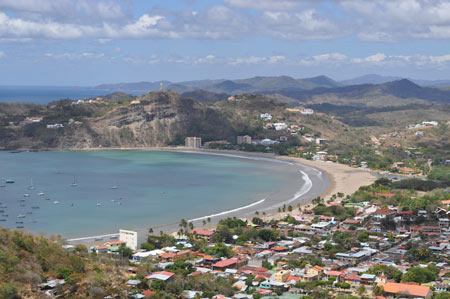 San Juan del Sur is around an hour and 45 minutes by car from the international airport based in Managua, which is the capital of Nicaragua. There’s full paved or tarmac roads all the way down. It’s a nice, easy, smooth ride. When I first moved here seven or eight years ago, it was a four- or five-hour drive, so it’s drastically improved, and the government is spending so much money on infrastructure, which is really nice to see.

You usually get countries like this developing slowly behind the private developers coming in, whereas Nicaragua seems to be the opposite way around. They’ve actually got too much infrastructure for the level of tourist coming.

It’s definitely where most of my clients tend to focus. There’s lots of different bars and restaurants—you can mix with lots of the locals, so it definitely has the local culture side to it; it’s not just foreigners there.

There’s also another main beach area that a lot of people focus on which is called Tola, which is about an hour north of San Juan del Sur.

Near Tola there are a couple of American-owned property developments—Iguana and Rancho Santana.

Iguana is one of the older, original ones. It has its own nine-hole golf course and probably one of the best—if not the best—waves in the country right in front. So it has always been very popular with surfers. There’s a nice little bar/restaurant situated there as well.

Rancho Santana doesn’t have a golf course, but they’ve got plenty of land. There’s horse riding, a tennis court, some great beaches, and beautiful oceanfront lots there. I’d say around $250,000, maybe a little bit cheaper for those, and then you can get ocean-view lots from around $75,000 up to $150,000.

The other development is Guacalito de la Isla, but that one is Nicaraguan owned. It is also the most expensive. Lots in there vary from a couple of hundred thousand up to a million—just for the land. You can buy three-bedroom townhouses from $750,000 and upwards. So that is a very high-end residential developmental complex with a golf course. They’ve also got their own boutique hotel, called Mukul. It’s beautiful and very expensive. But they’re aiming for that high-end clientele. Morgan Freeman came out for a visit once.

So these developments are for a different kind of person—someone looking for something easy… a nice place in the sun on a beautiful beach. One who doesn’t necessarily want to or need to come to Nicaragua for the culture.

Nick: What about infrastructure like roads, electricity, water, Internet, and so forth?

Sean: Guacalito de la Isla is the one with the big-money backing, so they’re paving the road all the way out from the highway to their development.

With Rancho Santana and Iguana, you’ve still got a 20- to 30-minute drive on unpaved road, but they do pack the dirt track quite well. But I find a lot of people who come down here don’t necessarily mind that, or they quite like the fact that it doesn’t feel like the US.

As for electricity, water, and Internet, that’s all everywhere.

There seems to have been a trend in New York-based or California-based buyers or people in the tech industry coming to Nicaragua. Quite a large portion of my clientele has been tech-industry guys. So then they’re coming down and they’re looking at spending a couple of months here whilst they work on a project, so they need good Internet. There seems to be quite a young, trendy crowd with money coming down—not just the retirees, which is nice because it provides a good mix.

Nick: Back to San Juan del Sur: what kind of price ranges are we talking here? What do you think provides the best value right now?

Sean: There’s a number of developments which cater to any need and budget. You can come down here with $50,000 and you can find a great lot. You can get a nice two- to three-bedroom place for around $200,000, and that obviously goes up in price. This is for properties or lots in neighborhoods or developments on the hills with beautiful views overlooking the horseshoe-shaped bay.

Editor’s Note: Stay tuned for part II of this interview, in which Sean and Nick discuss the finer details of purchasing real estate in Nicaragua, as well as the colonial city of Granada, the other popular expat/retirement destination. Be sure you get the free IM Communiqué, so you’ll get part II right when it comes out.