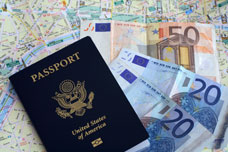 Ryan Losi, CPA, is Executive Vice President at PIASCIK. He is an international tax specialist who helps American expats manage their financial and reporting requirements back home.

We were talking the other day about the potential tax benefits for Americans who work in foreign countries. You want to tell us a little bit about that?

Absolutely. It’s estimated there are approximately eight million individuals listed in the US who are either green card holders or citizens who are living or working abroad or both. And what that means from a tax standpoint is that those individuals have a responsibility to report in their local jurisdiction where they are actually living and working. Because of the way the US tax system works, they are also required to report and file a US tax return.

US citizens have to file their taxes no mater where they earn their income, that’s correct?

That is correct. The last return they will have to ever file in the US is the day they die, better yet the year in which they die but yes, because there are so few exceptions, if you are a US citizen or if you are a US green card holder having permit status, you will always file a US tax return.

Okay, so if a US citizen or US green card holder is working in a foreign country and is also paying taxes to that foreign country, that can help reduce their tax bill in the US is what you’re saying?

That’s correct. The US tax system taxes unlike any other country in the world. It is on a worldwide basis regardless of source and regardless of residency for U.S citizens and green card holders. So the big difference between the way the US tax system works and most other countries – is that the other countries tax on a residency basis. So if you are there, you are subject to their tax, and if you break your residency, you are no longer subject to tax in that jurisdiction assuming you don’t have income sourced to that jurisdiction (e.g., business or rental property). In the US it doesn’t matter if you are here or not, you are still subject to tax here and your will continue reporting income on a worldwide basis.

However, we do have a tool to help mitigate the potential for double taxation. It’s the foreign tax credit regime. It allows a credit, assuming it’s a credible tax, to reduce your US tax on that same foreign source income. A credible tax is a tax enforced by the other jurisdiction on concepts similar to a net income concept like we have in our US tax system, but assuming it’s a credible tax, you have the potential to claim a foreign tax credit, dollar for dollar, against your US tax liability on that same foreign income.

Does this only apply to countries that have a tax treaty with the United States?

No, this foreign tax credit regime applies to just about any country, assuming they are not on the “bad list.” What treaties do, is they help lower the rates of taxes on different sources of income. Treaties help reduce the actual withholding tax rates, then can provide exemptions from taxation in one jurisdiction or another, define terms in a uniform definition between the two jurisdictions, and sometimes they allow you to source income from one country to another so that you have less reporting. Even without a treaty, if you were living and working in another jurisdiction the foreign tax credit regime would still exist by way of statute.

How exactly would one document these foreign taxes that are paid?

The easiest way is to have copies of the tax stamps that the local ministry of finance or local department of revenue provides. Many times your estimated tax payments or your actual tax payments, those payments will be stamped and approved by the local jurisdiction. Cancelled checks are another good one, and then also the actual local tax returns reflecting the amount for which you have the stamped documents or the cancelled checks to support. Certainly those three documents would generally be sufficient.

Perhaps you could walk us through a specific example with some typical numbers.

Canada’s tax rate is probably going to be 40%; actually it is probably going to be higher. I’ve seen it where it’s 48% depending on the provincial income tax rate; it’s going to put you definitely over 40 percent. But let’s just say for argument's sake it’s 40%. So you would have of that $100,000 USD equivalent, $40,000 USD would be paid to some taxing jurisdiction in Canada.

In the US, that $100,000 USD of gross income is probably going to generate a tax rate of around 20% or $20,000 USD because there are lots of deductions you can claim, mortgage interest deductions, real estate taxes, state income taxes if you have them, the personal property taxes, charitable contributions, all these wonderful deductions, and then you get the lower brackets of 10%, 15%, dependency exemptions for children and personal exemptions for you and your spouse as well.

Tell us about your firm and how you help expats with international tax planning strategies?

We spend a fair amount of our time helping expats who have been abroad and who recently returned to the US. You have 10 years to amend and change your foreign tax credit filing position. So unlike the 3 year statute that most people are aware of, for the foreign tax credit calculation itself there is a ten year statute, so you have a much longer time frame to make these changes.

But what we typically like to do is, we like to go back and generate as many foreign tax credits as we can. Now in some situations those foreign tax credits won’t be utilized on the amended returns, meaning it’s not going to generate tax refunds on the amended returns. What’s going to happen is it is going to create a very large foreign tax credit carryover. Our goal is to first of all have scoped out or been able to interview the client and get a sense of what their future work history is going to look like and find out if they are going to have the ability to generate foreign source income. If so, then we can create a situation where they utilize those foreign tax credits to reduce the tax on their future US earnings by reclassifying their income from foreign sources. If they are not able to do any work abroad, even just a few days a year, then this strategy will probably not work, but you would be surprised how many former expats work 10-30 days a year outside the US.

Therefore, if you are an expatriate and you are returning to the states and your income was over $100,000 USD, and you were in a jurisdiction that had an income tax, so not one of the tax haven countries, but an actual country that had an income tax, I would strongly encourage you to have an international tax expert review your past 10 years' returns to see if there is any potential to boost your foreign tax credit carryovers with the idea that you could utilize those in the future. I will say that I have yet to see an expat where this didn't apply.

Thanks for your time Ryan.

Editor’s Note: Things can change quickly. New options emerge, while others disappear. This is why it's so important to have the most up-to-date and accurate information possible. That's where International Man comes in. Keep up with the latest on the best diversification options by signing up here for free. You’ll also get access to other stuff like Doug Casey's very popular special report Getting Out of Dodge.

It ranks at the very top of potential tax nightmares, especially if you invest internationally.

This Could Destroy the Lives of Millions

Dual American-Canadian citizens are finding themselves in a serious bind due to FATCA, which has been dubbed “the worst law that Americans have never heard of.”

If You Have an Offshore Bank Account, You Need to Know About the New FBAR

There have been some changes lately to the FBAR that you need to know about. Namely, starting this year, it must be filed online—paper forms will no longer be accepted.

“Cruel and Unusual” Is the Only Way to Describe It

If throwing an elderly widow in a cage for six years for not properly filling out a government form is not cruel and unusual punishment, then the phrase has no meaning.