A recent revolution, a war-torn country, and US mischief orchestrated by a spawn of Clinton… It all adds up to a genuine crisis. And a huge opportunity to profit.

Doug Casey and I flew halfway around the world to check it out for you. But before I tell you about that, you need to know about Victoria Nuland…

I doubt one in a hundred Americans have heard of her.

The mainstream media rarely mention her. But that doesn’t mean she isn’t important.

Nuland personifies the Deep State—the permanently entrenched shadow government that lurks behind every government office. She’s an upper-level State Department bureaucrat, a protégé of Clinton and Dick Cheney, and a lifelong government employee.

Nuland is also married to Robert Kagan, a think-tank wonk and member of one of the most prominent neoconservative dynasties in the US. He co-founded the Project for the New American Century, an institution at the center of the faulty case for the 2003 Iraq invasion.

Despite being catastrophically wrong about Iraq, Robert still gets lots of op-ed space in the mainstream media.

Other Kagans are just as deeply embedded in the US power structure. Robert’s brother, Frederick Kagan, and sister-in-law, Kimberly Kagan, also rotate roles among various think tanks, the government, and companies tied to the military-industrial complex.

The Kagans are the perfect representation of the rotten apples benefitting from the Deep State.

The Kagans use their think tank and media clout to encourage an interventionist foreign policy. The government picks up those policies. Then, whichever party is in power—Republican or Democratic—hands the family prominent government positions.

It’s a self-perpetuating system with no purpose except sustaining itself.

But back to Victoria Nuland, a Kagan by marriage…

While almost no one in the US has heard of her, practically everyone in Ukraine knows who she is. That’s because she helped instigate the violent overthrow of Ukraine’s corrupt pro-Russia government in 2014. Then she helped put a corrupt pro-US government in its place.

Think of it as Washington sneaking off with Russia’s girlfriend.

Ukraine is Russia’s most important neighbor. Slavic countries, like Russia, trace their cultural heritage to the Kievan Rus’—a federation of tribes based in Ukraine from the late 800s through the early 1240s.

Ukraine is also a strategic jewel. US strategists have long fantasized about absorbing the country into NATO. It would go a long way toward neutering Russia’s military might and isolating Moscow.

In recent years, the US has spent around $5 billion on “democratization” in Ukraine. In reality, that means covert mischief executed through nongovernmental organizations (NGOs), which are simply fronts for the CIA. They don’t really care whether the new government they install allows for more political freedom. They just want a US stooge in control of it.

A partial list of the culprits includes USAID, the National Democratic Institute, and the International Republican Institute, as well as nominally nongovernmental organizations like Freedom House, George Soros’ Open Society Foundations, and the National Endowment for Democracy.

If protests broke out in an autocratic US ally, like Saudi Arabia, I’d bet you a gold coin that there would be no NGOs funneling billions of dollars to the opposition and that “protesters” would magically turn into “terrorists” in the official narrative.

In early 2014, tensions between Ukrainian protesters and the pro-Russian government started exploding into bloody confrontations. At the time, Nuland was famous in Ukraine for making speeches and handing out cookies… a not-so-subtle wink that Washington had the protesters’ backs.

The protesters had built an encampment in Maidan, Kiev’s central square. Riot police skirmished with them from time to time.

Everything came to a head on February 20, 2014. Mysterious snipers opened fire on both the protesters and the police. They killed over 90 people.

To this day, we really don’t know who orchestrated the sniper attacks…

But, the truth is, Nuland did far more than hand out cookies. She and Geoffrey Pyatt, the US Ambassador to Ukraine at the time, were taped essentially plotting a coup d’état. The five-minute phone call was leaked to YouTube.

Anyone with the right kind of equipment could have intercepted the unencrypted call. The incident revealed their malfeasance—and their professional incompetence.

Regardless of who planned the sniper attacks, the protesters used the suspicious incident as a casus belli to storm the presidential palace. Ukraine’s pro-Russian president promptly fled the country. His government collapsed, and Nuland’s handpicked successor rose to power shortly thereafter.

Nuland and her flunkies expected Putin to stand idly by and do nothing while Washington ran off with Moscow’s girlfriend.

They were dead wrong.

Russia called the incident an armed coup. And Putin used it to justify annexing the Crimean Peninsula, home to Russia’s most important naval base. It also provided a convenient reason to support secession movements in the Donbass region of Eastern Ukraine.

To date, Ukraine’s central government has lost control of the Donetsk and Luhansk provinces in the East—and, of course, Crimea. The conflict in Eastern Ukraine is still playing out. Over 10,000 people have reportedly died.

The US supports the Ukrainian government, and the Russians support the separatists. It’s the closest we’ve come to World War 3 since the Cuban Missile Crisis.

Doug Casey and I visited Ukraine earlier this year. I can tell you firsthand that this country is in a genuine crisis.

Nobody wants anything to do with Ukraine. It’s probably the most hated market in the world right now.

Doug and I didn’t see a single foreign tourist or investor in Kiev. All of the local investment professionals we met advised us to keep our money out of the country.

This is actually a good sign. It means we might be near the point of maximum pessimism.

Finding genuine blood-in-the-streets opportunities is why Doug and I travel to these far-flung places.

The Ukrainian stock market is in total collapse. It’s plunged over 95% from its previous peak (in US dollar terms). According to Bloomberg, it’s the worst-performing market in the world.

Unfortunately, I don’t see much hope for Ukraine as a country. Many locals and expats we met feel the same way.

The current pro-US government is pinning its hopes on joining the EU. There’s even a large statue of an EU flag near the airport illustrating its misguided hopes.

As we’ve covered lately, with the rise of euroskeptic political parties across the continent, the EU’s days are numbered. Second, adding Ukraine and all of its problems to the EU would be like hitching a boulder to a sinking ship.

Ukraine is drowning in debt. Its economy is in shambles. Crimea and the Donbass, the two most strategic regions, have been dismembered. The rest of Ukraine no longer trades with Russia, which used to be its largest trading partner.

The country’s only real hope is some sort of reconciliation with Russia. But that’s inconceivable to many Ukrainians. They cling to the hope that Washington or Brussels will come to the rescue, which is unlikely…

Still, there is a way for us to play Ukraine. It’s a genuine blood-in-the-streets opportunity.

The most lucrative opportunity is in the eastern regions—the Donetsk and Luhansk provinces—that have effectively seceded. It’s unlikely the government in Kiev will reestablish control over these provinces. And they’ll keep economic and military support from Russia, no matter what the Kiev government does.

Donetsk and Luhansk are right in the middle of the Black Earth Region, one of the world’s richest, most fertile agricultural zones.

The Black Earth Region is to grain what Saudi Arabia is to oil. For centuries, it’s been “the breadbasket of Europe.” Its black soil is loaded with high concentrations of phosphorus, ammonia compounds, and other nutrients.

I think agricultural real estate is the ultimate hard asset. Like gold, central bankers can’t dilute its value. But it also produces food, the most basic of human needs.

The crisis in Ukraine is handing us an opportunity to pick up this economically strategic asset at bargain prices.

Last week alone, a Ukrainian agricultural producer’s stock in the Crisis Investing portfolio jumped over 33%. So far, subscribers are sitting on about a 75% gain. But it’s not too late to join the party. We think this pick still has substantial upside.

Crisis Investing offers a perspective you won’t find anywhere else—certainly not in the mainstream financial media.

Each month, Doug Casey and I report on the crisis-born opportunities we find lying in the rubble of economic collapse, civil unrest, revolution, war, and geopolitical turmoil. Detecting fear and the bargains it creates is our specialty.

That’s why Doug and I look for trouble. History shows the greatest opportunities for wealth creation have happened during times of crisis. After all, that’s how Nathan Rothschild, Warren Buffett, Jim Rogers, and John Templeton made their fortunes.

We recently released a video, Making Fortunes in Crisis Markets, to show you exactly how they did it. Click here to watch it now. 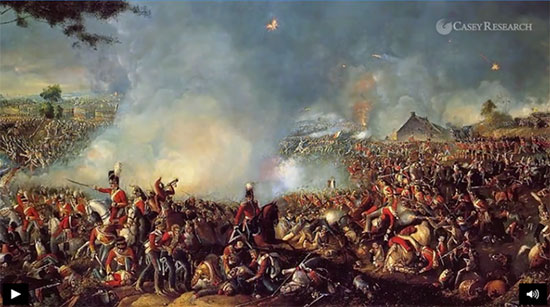