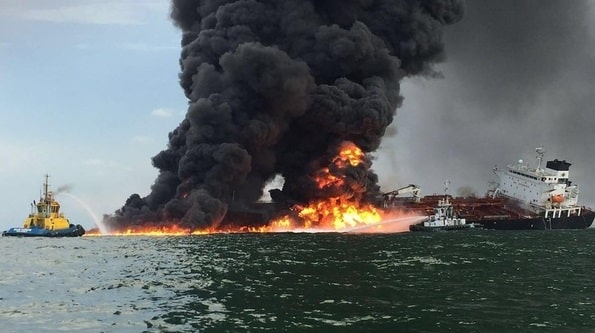 The Iraq-Iran War was one of the bloodiest conflicts of the past 50 years.

It also set the stage for a multibillion-dollar empire…

The US, Europe, the Arab countries, and the Soviet Union—practically the whole world—supported Iraq.

Saddam used chemical weapons on the widest scale since World War 1. Oddly, nobody seemed to care at the time. The US government only made a stink about it years later, after Saddam had morphed from a US ally into the Hitler du jour.

Iraq and Iran were (and still are) two of the biggest oil exporters in the world. Earnings from oil exports were crucial to both. That’s why each side targeted the other’s oil tankers.

Not surprisingly, it became incredibly expensive and inconvenient to ship oil from the Persian Gulf, which was an active warzone.

The US Navy escorted the oil tankers of US allies like Saudi Arabia and Kuwait. But Iran’s oil shipments were completely vulnerable.

Given the extreme risk, oil shippers wanted nothing to do with Iran. But Iran needed to export its oil. During all this bloody chaos, emerging shipping magnate John Fredriksen sensed an opportunity to build a fortune.

Fredriksen struck a deal with the Iranian government to ship the country’s oil exports when nobody else wanted to. This gave him huge bargaining power, which he used to make enormous profits.

The deal earned Fredriksen a famous nickname… “lifeline to the Ayatollah.”

Naturally, Saddam Hussein repeatedly attacked Fredriksen’s tankers because they were carrying the enemy’s crude. One time, Iraqi fighter jets killed two of his crew members in a missile strike.

But the attacks weren’t Fredriksen’s only problem.

At one point, Iran fell over $10 million behind in payments. So Fredriksen confiscated ships loaded with Iranian oil. He promptly moved them out of Iranian-controlled waters and refused to give them back until the Ayatollah paid up.

Iran sent a warship to “persuade” Fredriksen to return its oil. But a US warship intercepted it before it could reach Fredriksen’s tankers. With little recourse left, Iran came to terms with Fredriksen.

Despite these close calls, Fredriksen made huge profits. It was the beginning of a multibillion-dollar fortune and a shipping empire.

Fredriksen eventually became the richest man in his native Norway and the most influential ship owner in the world.

Fredriksen is a native of Norway, one of the most heavily taxed countries on Earth. After a dispute with the tax authorities, Fredriksen relinquished his Norwegian citizenship. He became a citizen of tax-friendly Cyprus.

Fredriksen rose to the top of the global shipping industry thanks to his guts, instincts, and, most importantly, his keen sense of timing.

You see, the shipping industry is brutally cyclical. It goes through huge booms and busts.

Getting the timing right is the key to making money in the shipping industry. And Fredriksen understands the cycle better than anyone.

One of the strange things about shipping is, you make your big money based on your entry point in the market and the exit point, and he’s brilliant at both.

In other words, it pays to watch what Fredriksen does.

Recently, he made a huge bet that the shipping industry is about to turn around.

“It Hasn’t Been This Bad Since the Black Death”

We’re eight years into one of the worst bear markets in the history of shipping.

It’s one of the few industries that never really recovered from the 2008 financial crisis. In fact, it’s in worse shape.

One of Fredriksen’s top colleagues recently said, “It hasn’t been this bad since the black death.” He wasn’t exaggerating.

Shippers make money by hauling stuff from point A to point B. It’s standard practice for shippers to lease out their vessels for negotiated periods of time. These arrangements are called charters.

Charters help lock in a fixed amount of revenue for a shipper.

Charter rates are based on the supply of, and demand for, ships. And they’re by far the biggest variable for shipping companies.

When a shipper signs a long-term charter, he misses out if rates rise during the charter’s term. Conversely, if rates go down, an existing charter insulates a shipper from a decline in revenue.

A shipper who relies on shorter-term charters is more exposed to fluctuating charter rates. But that’s a good thing when rates are rising.

Remember, the shipping industry is extremely cyclical. It’s been that way for over a century. It goes through huge booms and busts.

One reason the shipping industry is so volatile is that it’s prone to malinvestment—which is the result of faulty investment decisions.

Central banks encourage malinvestment by suppressing interest rates. Companies invest in plants, equipment, and other capital assets that only appear profitable because borrowing money is cheap. This leads to wasted capital and, eventually, economic loss.

This is how malinvestment plays out in the shipping industry…

When charter rates rise, shippers make more money and want more ships. Artificially low interest rates make it easier to buy them. The problem is building a ship takes at least two years. And the business environment can change drastically in that time.

This is exactly what happened in 2007. At the time, the shipping industry was in a state of euphoria. Charter rates were high and orders for new vessels shot up. Most were financed with debt. Then the 2008–2009 financial crisis hit. World trade slowed and shipping demand plunged.

Then things got really ugly.

Shipbuilders started to deliver the vessels that shippers had ordered during the happy days of 2007.

This was the last thing shippers wanted. Now they had an enormous oversupply of vessels. Plus, demand for moving stuff had weakened.

Only quality companies survived. Today, many of their shares are down more than 90% from their peak.

Charter rates are so volatile that you can double your money, or even bag 10-baggers, in short periods of time. As Doug Casey says, you should make volatility your best friend.

You can see what I mean in the chart below. This chart shows the Baltic Dry Index (BDI), which measures the cost to move raw materials like iron, coal, or wheat across the ocean. It’s also a benchmark for charter rates.

Between 1999 and 2008, the industry had an epic boom. During that period, the BDI rocketed more than 14-fold. Shippers made a killing.

Then the financial crisis hit.

Rates went on to crash more than 90% since 2008. Today, the BDI is still near record lows. 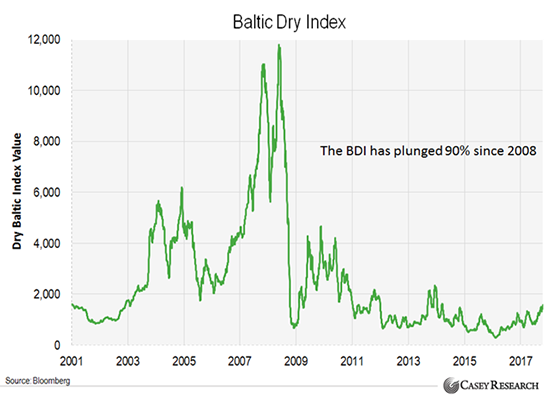 The shipping industry has now been in a bear market for eight years and counting. That’s the bad news.

The good news is that the shipping cycle usually lasts about seven years. It takes a long time for supply and demand to balance out.

The current downturn has lasted almost eight years, which is extraordinarily long.

The turning point could be close. In fact, a number of fundamental factors are starting to turn the industry around.

For starters, the shipping glut is shrinking after years of bankruptcies and shippers scrapping vessels. There are almost no new ships on order.

That means there won’t be any new supply until at least 2020. (Again, it takes approximately two years to build a ship.)

And, as supply shrinks, demand is set to increase.

This behemoth project is moving ahead as planned. China will need to import a lot of commodities to create this infrastructure. That will create demand for shippers.

Not to be outdone, President Trump has announced his own trillion-dollar plan to repair, replace, or build critical infrastructure. And, of course, he’s promised to build a 2,000-mile wall along the US-Mexico border. This is another huge infrastructure project.

I think it’s a good bet that Trump will follow through on at least some of his promises to build new infrastructure. Trump’s “America First” pledge notwithstanding, the US will undoubtedly need to import some materials for this.

The US and China’s multitrillion-dollar infrastructure tsunami will be a big positive for shippers.

When the upturn begins in earnest, there won’t be enough shipping capacity to handle the demand. That’s when charter rates—and profits for shipping investors—will explode higher.

Not only that, but Fredriksen, who knows the shipping cycle better than anyone on the planet, is betting on an upturn.

Earlier this year, one of his shipping companies scooped up vessels from a distressed seller for pennies on the dollar.

This, along with today’s depressed levels, tells us the industry has likely bottomed. We might even be looking at the best time ever to enter the shipping industry.

Here are a few more reasons why…

But don’t worry. You didn’t miss your chance to buy shipping stocks.

Remember, these stocks have been beaten to a pulp. Many are still down more than 90%.

That means they could double and still be 80% off their old highs. Others could soar 1,000% or more in the coming years.

In short, there’s plenty of upside left. Yet most investors are still afraid to touch this industry.

But we’re not worried about what the average investor does. We care what a legendary crisis investor like Fredriksen is doing.

And right now, his actions are telling us that the industry is at the point of maximum pessimism. Of course, as you know, that’s exactly when you want to buy.

Editor’s Note: Tensions in the Middle East are on the rise. The situation could explode at any minute, and lead to the biggest regional war in decades. Oil prices could skyrocket overnight.

The next oil shock could be a lot closer than many people think. That’s why you need to see this urgent video which explains it all, including how to set yourself up for big profits. Click here to watch it now.

P.S. Earlier this year I told Crisis Investing subscribers about a best-of-breed shipping stock. This crisis had turned it into an extreme bargain.

It was a classic crisis investment. And it’s paying off. As of writing, it’s already up around 22% since I recommended it.

That’s a big move for such a short period. But I think there’s still a lot of upside left. This shipping stock could turn into a 10-bagger in the months ahead. Click here to learn more.