The US is about to experience one of its biggest social and economic changes in generations.

And the story of Desert Hot Springs, California, is the key to understanding it all…

Like many US cities, Desert Hot Springs had chronic financial problems. The city filed for Chapter 9 municipal bankruptcy in 2001. Then it nearly went bankrupt again in 2014, when it declared a fiscal emergency.

At this point, the city’s people were desperate to solve their intractable financial troubles. So they opened their minds to a new idea.

They voted to become the first place in California to allow indoor cannabis cultivation on an industrial scale. A full 70% were in favor.

The city would, of course, tax these operations.

Local politicians had nixed the idea before. But the risk of two bankruptcies in 15 years changed their minds. Necessity has a way of doing that.

Since the vote, it’s issued permits to more than 30 growers for over 3 million square feet of cannabis cultivation.

Hundreds of new jobs have been created. Previously vacant industrial real estate is buzzing with activity.

The local government now has a $15 million budget to pay its employees and run the city. Yet it’s soon expected to take in $50 million in cannabis taxes alone.

Desert Hot Springs has gone from a dying pit stop with big money troubles to a booming city with more cash than it knows what to do with.

This is why widespread cannabis legalization is both inevitable and imminent… money.

Many places in the US have similar stories.

According to Bloomberg, Washington state will generate $155 million in cannabis-related taxes this year. After four years, that number is expected to exceed $1 billion.

In California—which started selling recreational cannabis legally on January 1—cannabis taxes are projected to bring in at least $1.4 billion each year and create more than 100,000 new jobs by 2020.

In many of the states that have or will legalize cannabis, the tax revenue will exceed that of alcohol and tobacco. That’s not something a cash-strapped state can turn its back on.

All that money will quickly become a permanent part of many state budgets. This will encourage other states to follow suit.

It’s important to clarify something here.

The US also has a higher percentage of its population in prison than North Korea, Cuba, Iran, Syria, or any of the other countries it routinely demonizes.

The war on (some) drugs—and cannabis prohibition in particular—is the biggest reason why the US is still number one at something… locking people up.

I’m not celebrating a new way for state and municipal governments to steal money from people voluntarily exchanging goods and services. I think taxation is morally indistinguishable from theft.

But taxing cannabis—rather than prohibiting it outright—means more personal freedom and less government coercion. It’s a big step in the right direction.

According to a recent Gallup poll, 64% of Americans say cannabis should be totally legal. That’s the highest level of support since polling on this issue started 48 years ago.

Today, opposition to legalization has dropped to an all-time low of just 34%.

Meanwhile, support has more than doubled since 2000. And, as you can see in the chart below, it’s continuing to grow. 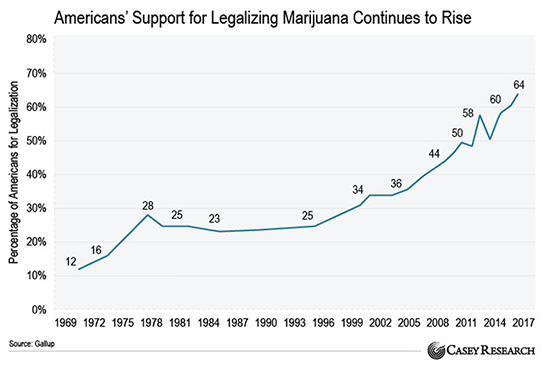 It’s only a matter of time before other states do the same. And eventually the US federal government will as well.

The economic benefits of legalization are simply too good to pass up.

It’s absurd, but the US federal government still classifies marijuana as a Schedule 1 drug. In other words, the feds put marijuana in the same category as heroin and LSD—and they consider it more dangerous than cocaine or meth.

But this ridiculous policy probably won’t last much longer.

Of course, you might be worried that the Trump administration will shut down the legal cannabis industry—along with your chance to profit from it.

And there’s good reason to be cautious. After all, Trump’s attorney general did call marijuana “slightly less awful” than heroin.

Comments like this have stopped many people from investing in marijuana. But consider the bigger political picture.

First, the industry is too big to shut down. There’s simply too much money and too many jobs at stake. The backlash would be overwhelming.

Second, states’ rights matter to Trump voters. Cracking down on the industry would alienate the people who put him in office.

Attacking the US marijuana industry would cost Trump a lot more than it’s politically worth. It wouldn’t make any sense to do it.

This Pointless War Is Almost Over

Casey Research founder Doug Casey and I (Nick Giambruno) are professional crisis investors. We spend a lot of time flying around the world, chasing turmoil and the profitable opportunities it creates. That’s why we frequently wind up in obscure and violent places like Zimbabwe, Kazakhstan, or even Haiti.

We usually find the best fortune-building investments for our subscribers in these far-off countries. But right now, the legal marijuana market is handing us incredible opportunities in California and Colorado.

At first, marijuana stocks might not seem like a classic crisis investment. The industry isn’t coming out of a brutal bear market or downturn.

Instead, it’s in the early innings of a mega bull market.

However, crisis investing is also about taking advantage of politically caused distortions in the marketplace. And it’s about profiting from aberrations of mass psychology. This is what we’re doing with the legal marijuana market.

The reality is, this market has been in one long crisis since the ’30s, when the US government prohibited it at the federal level. Then President Nixon accelerated the crisis by starting the “War on Drugs” in the 1970s.

This pointless war has killed an untold number of people. It’s put millions of non-violent offenders behind bars. It’s even ravaged entire countries, like Mexico and Colombia.

Thankfully, this bloody war is almost over.

Right now, leaders around the world are rethinking marijuana prohibition. Many longtime “drug warriors” are even changing their tune.

Prohibition is an unsustainable distortion in the cannabis market—a distortion that we’re taking advantage of to make massive profits.

Next week, I’ll be hosting a free webinar with legendary speculator Doug Casey that shows you how to get join the party for the “second” marijuana boom. We’re calling this event the New Marijuana Millionaire Summit.

During the summit, we’ll share details on how anyone can position themselves into the future “Amazon” and “Home Depot” of the legal pot industry. Click here for more details.

P.S. On January 10 at 8 p.m. ET, I’ll be hosting a free webinar with legendary speculator Doug Casey that shows you how to get rich in the “second” marijuana boom. We’re calling this event the New Marijuana Millionaire Summit.

During the summit, we’ll share details on how anyone with a few hundred dollars can position themselves into the future “Amazon” and “Home Depot” of the legal pot industry. If you missed the first wave of marijuana investing—when pot stocks were gaining 986%, 17,300%, 69,000%… even 299,000% and 399,000%—don’t worry. It’s not too late to become the next marijuana millionaire.