Reaching the opportunities that lie beyond the borders of your home country is seldom simple, but it can be worth the effort. In fact, moving at least part of your financial life away from your home government and its eagerness to share in what you’re accumulating is one of the most liberating steps you’ll ever take.

Depending on what you do for a living, you may be able to take your personal earning power to friendlier shores, along with the earning power of your nest egg. This can mean a dramatically improved lifestyle, since less of your income – from running a business, for instance – is lost to taxing authorities and more is left for you to spend or save as you please.

For most residents of the modern world, making such a jump is possible only if it won’t interfere with earning the income they are trying to protect. That’s why so many of the people who’ve made their way to far-flung destinations to lessen their tax burden (and enjoy a more pleasant life) are investors or individuals who work in do-it-anywhere fields such as software development, investment management, and Internet-based businesses.

For some, it’s as straightforward as hopping on a plane and working from where the plane lands. But not if you’re an American.

U.S. citizens and permanent residents have only limited opportunities for fleeing the tax collector. Their homeland is the only one in the world – besides the tiny, impoverished African country of Eritrea – that taxes its nonresident citizens on their income, regardless of where they earn it.

For this reason, an American who moves to a zero-tax jurisdiction like the Bahamas, for example, still pays a U.S. tax bill. A Canadian expat working in the Bahamas would have no income tax bill at all.

Enforcement activity makes the burden even worse. The U.S. government puts immense pressure on foreign banks and their governments to help ensure that no dollar of any American’s income escapes the notice of the IRS. To avoid the cost of demonstrating detailed compliance with the regulations forced on any bank that wants access to U.S. financial markets, most foreign banks simply show U.S. citizens the “unwelcome mat.”

Americans are in the uniquely unfavorable position of living under the world’s most sweeping tax regime and suffering a government that can effectively enforce that regime anywhere in the world. For many, U.S. tax rules are a tight and choking leash. It’s no wonder that record numbers of Americans are giving up their citizenship to seek freedom elsewhere.

But breaking the tax leash by renouncing U.S. citizenship is a big step, and it can carry a high price. You may have to pay a hefty “exit tax” on the way out the door. And you can’t be sure that renunciation won’t make visiting the U.S. difficult, which rules it out for most people with friends or extensive family in the States.

For years, individual U.S. states have exploited tax fatigue to attract those looking to save a few dollars by moving to a place that doesn’t treat them like a milk cow. The offer is simple: at no more than modest cost or inconvenience, you can move to our state and protect up to 10% or more of your income from the tax collector. The income-tax-free states of Alaska, Florida, Nevada, South Dakota, Texas, Washington, and Wyoming all make that offer. Nevada has drawn thousands of Californians to Incline Village, Nevada’s interstate tax haven on Lake Tahoe.

Even more conspicuous is Florida, with zero state income tax plus property tax rates that decline with the age of the owner. For decades, it has attracted wealthy retirees who grew their nest eggs in New York, New Jersey, or other high-tax states and want to enjoy their money in a sunnier climate.

Florida presented what was until recently the best balance of lower taxes and a tropical lifestyle available to Americans who didn’t want to give up their citizenship.

But your alternatives just got better. There is a new option that out-Floridas Florida, and by a big margin.

More than the “Better Florida”

There is a U.S. jurisdiction that has an advantage few competitors can hope to match.

Specifically, those who qualify are eligible for:

When we learned of this new option, we were excited but skeptical. It sounded just too good to be true…or one of those things whose complexity requires paying an army of lawyers. However, our investigation found that the tax advantages of this program are real and that for many Americans, including individuals operating on a modest scale, they are a huge opportunity.

That’s exactly why we we’ve put in hundreds of hours of research to put together the definitive comprehensive guidebook to these incredible tax advantages: How to Legally Remove Yourself from the U.S. Tax Code, Without Leaving America.

We believe this guidebook is so important, especially right now, that we’ve arranged a way for you to get a free copy for a limited time.

We’ve circulated the guidebook among top attorneys and accountants to get their comments and ensure the information is as accurate and straightforward as possible. In fact, one prominent law office lent the report its seal of approval after thoroughly reviewing it.

It’s an A-Z guide with information you won’t find anywhere else. And, for a limited time, we’re giving it away for free. Click here to obtain your free copy today. 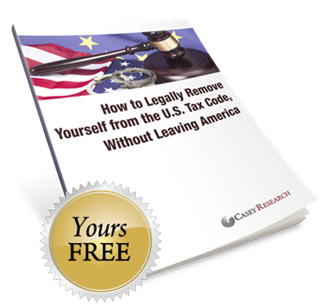 Rothschild: USA Is the New Switzerland

The U.S. is the biggest tax haven in the world.

The End of Tax Havens?

Governments are in a last-ditch effort to squeeze as much wealth as possible from their citizens. Here’s what to do about it.