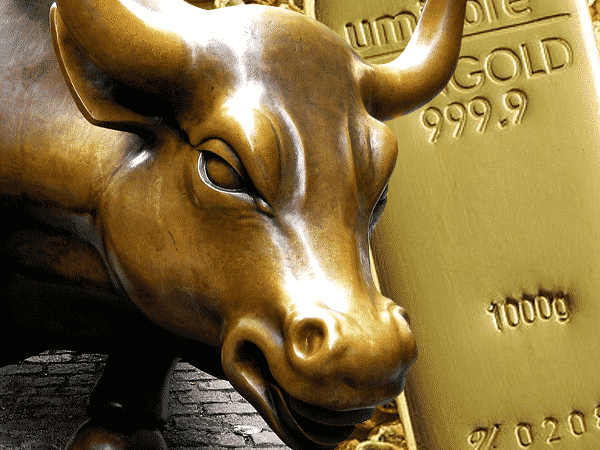 A mini gold boom that just delivered stealth doubles and triples to some investors was barely noticed.

Since gold’s spectacular run last summer, it has surged even higher to nearly $1,600/oz. And with that, momentum and volume is entering the market.

After waiting so patiently for gold to rise above its 2013 high, it might be tempting to take your minimal profit and run.

Or, following the slight dip and stagnation in late 2019, it’s easy to get nervous about entering the market in the first place.

But if historical precedent is any indication, there is a lot more money to be made in the next gold boom.

Especially if you’re investing in gold the right way.

Your profitability in the gold market heading into 2020 requires having the answers to these three questions:

Macro research will tell us the overall direction.

But one of the most important indicators is sentiment.

And there’s no better gauge of sentiment than a conference solely focused on resources – the 2020 Vancouver Resource Investment Conference.

There have been lean years where Bitcoin and Cannabis were kings. But now that pendulum is shifting to precious metals… in a big way.

But that doesn’t mean it’s the peak…

The Next Gold Boom: The Real Gold Bull Market Is Yet to Launch

The gold market has always moved in cycles—from dramatic boom to overnight bust, and eventually back again.

So far in this “boom,” gold has barely risen 20% from its floor.

That’s not even close to the minimum required to qualify for a true “bull market” over the past century. 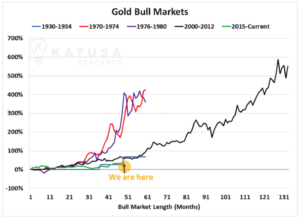 The point is this: when gold is ready to rise, it takes off.

Every single one of the years in the date ranges above saw an increase of more than 20%. What some investors might see as slipping backwards may just be the cycle getting ready for its next natural advance.

So if you’re a subscriber to my Boom-Bust-Echo theory, then you know the gold rally has barely just begun.

The biggest profits still lie ahead of us.

Savvy investors will patiently hold, before finally selling near the peak of the boom.

For example, many major gold producers right now, such as Kinross, Gold Fields, Alamos, and Eldorado are trading around $5-6.

These stocks could easily be sitting at doubles a year or two from now. And the juniors’ percentage returns will likely be an order of magnitude greater.

Why Gold Is a Bad Investment When “This” Happens

During a gold rally, you might be tempted to invest directly in gold bullion.

There are many reasons why that’s not the best way to invest, including the persistent strength of the U.S. dollar. Have some bullion exposure.

But another really big reason is the potential for extreme leverage with gold stocks.

Look at what happened to gold in the ‘70s…

It took off early, cooled off a bit in the mid-‘70s, then hit the afterburners headed into the latter part of the decade.

That would be like gold going to $5,641 by the time the next U.S. President is inaugurated. If it happened forty years ago, it can happen again.

Now, digging up information on tiny gold producers from the early ‘80s is no easy task. Most of the information was not digitized then.

But here’s data we put together below on a few producers along with the percentage returns at their peak:

Of course, it’s only the lucky investor that’s going to catch it right at the top.

But suppose you could capture 75% of those gains. That’s still a 165% return.

Buying into gold stocks instead of gold takes luck out of the equation. But we still haven’t mentioned where the real gains are to be had.

The ones that turn a modest portfolio into your whole retirement plan.

Editor’s Note: The recent breakout in the price of gold is just the beginning. Gold is set to skyrocket in the months ahead, and gold stocks are going to be explosive.

Exclusive investors, including legendary speculator Doug Casey, have already profited from Marin Katusa’s mining recommendations. As the gold bull market takes off in earnest, his recommendations are set to deliver enormous returns.

Right now, Marin is revealing the top gold mining stocks he’s buying and how you can join him in the coming gold boom. Click here to get all the details.