They met in secret to plan a devastating attack…

Two powerful men, colluding at a palace in the Middle East.

In September 2014, U.S. Secretary of State John Kerry flew to Saudi Arabia. He was there to meet with King Abdullah, the country’s ruler and one of the richest men in the world.

Informed observers say Kerry and Abdullah drew up a plan at this meeting to destroy their common enemies: Russia and Iran.

To carry out the attack, they wouldn’t use fighter jets, tanks and ground troops. They would use a much more powerful weapon…

Oil is the world’s most traded commodity. Saudi Arabia is the world’s largest oil exporter. It has arguably more control over the price of oil than any other country does.

Insiders say Saudi Arabia agreed to flood the oil market at this secret meeting. The purpose was to drive down the price of oil. This would hurt Russia’s and Iran’s economies. They both depend heavily on oil sales.

Their strategy has had some success.

As you can see in the chart below, the price of oil has plummeted over 70% since John Kerry’s secret meeting with King Abdullah in September 2014. 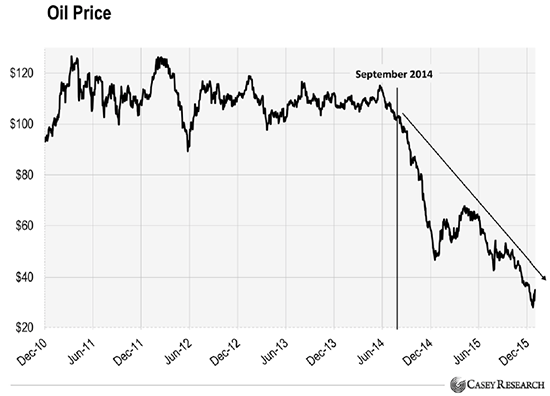 There’s so much conflict in the Middle East—but oil prices are falling.

And despite China’s economic slowdown…it still imported more oil in 2015 than in 2014. China is the world’s number two oil consumer behind the U.S.

Turmoil plus demand says oil should be going up, not down. But the mystery is explained by the Saudis’ oil war and their strategy of flooding the market to bankrupt competitors.

The Saudis have also declared war on the U.S. shale oil industry.

In the 1990s, the U.S. imported close to 25% of its oil from Saudi Arabia. Today—because of high U.S. shale oil production—we import only 5%.

By keeping the market saturated with oil, the Saudis are driving down the price. They hope to drive it down low enough and long enough to bankrupt the shale industry…since shale oil costs more than Saudi oil to produce.

This would knock out a major competitor and let the Saudis regain lost market share.

But economic warfare doesn’t always go according to plan. I think the Saudis made a colossal mistake…

Impaled on Their Own Sword

I think the Saudis have overplayed their hand…big time.

Oil makes up 90% of Saudi government revenue. So the price drop has been very painful. They’re bleeding through their reserves.

The market is putting more pressure on their currency peg than at any time in its history.

For over 30 years, Saudi Arabia has pegged its currency at 3.75 riyals per U.S. dollar. To maintain this, it needs a large stash of U.S. dollars. With its historically large reserves, this has never been a problem.

But now, the Saudi budget is under serious pressure. The government is only staying afloat by draining its foreign exchange reserves. This threatens Saudi Arabia’s ability to support its currency peg.

If the currency peg breaks—which is exactly what the current market expects—the riyal would be devalued. This would increase the cost of living for Saudis across the board.

It would also increase social unrest.

The Saudis are also losing billions underwriting foolhardy wars in Yemen and Syria.

The Saudis thought they could support armed Syrian rebels and topple the Assad government in a matter of months. They figured Assad would fall just as easily as Gadhafi did in Libya in 2011. It was a gross miscalculation.

The Saudis launched the war in March 2015. They wanted to reinstate a Saudi-friendly government. The Saudis thought the intervention would last a few months, then they’d declare “mission accomplished” and go home. That’s not what happened.

The political and economic stars are aligning against the Saudis. It’s their most vulnerable moment since the kingdom was founded in 1932.

The Saudis are having some success. In the past year, at least 67 U.S. oil companies have filed for bankruptcy. Analysts estimate as many as 150 could follow. The shale oil industry is in “survival mode.”

And the crisis in the oil market could spread. That’s because many banks made big loans to these distressed shale oil companies. A wave of bankruptcies means those loans could go bad, which would be a huge threat to those banks.

It has the potential to trigger another meltdown in the financial system. The warning signs are there.

I wouldn’t own any bank that has big exposure to risky shale plays…nor keep my life savings there.

The Saudis have damaged the U.S. shale oil industry. And they’ll continue to cause more damage. But they won’t bankrupt every producer.

The shale industry has more staying power than Saudi Arabia. Some producers now say they’re profitable with $40 oil. And their pace of innovation will drive that even lower. The industry will survive.

All the Saudis have done is create an existential crisis for themselves.

Either way, oil will eventually go a lot higher.

In the meantime, we have a huge opportunity…

The crisis in the oil market gives us a second chance to invest in the American shale revolution. Now is the time to get ready to buy the highest-quality shale companies at bargain prices.

You should view the Saudi-driven crisis in the oil market as your opportunity.

Great investors like Warren Buffett, the Rothschilds and Jim Rogers run toward a crisis. Crisis investing was a key part of their investment strategies. And it’s one anyone can use. New York Times best-selling author and crisis-investing pioneer Doug Casey just released a video that shows you exactly how. Click here to watch it now.