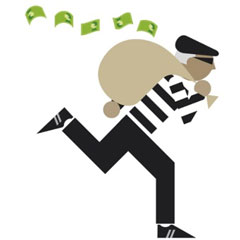 The people of Cyprus had a very rude awakening to the issue of political risk on Saturday morning. It should serve as a wake up call for us all.

They discovered that their government and a bunch of EU bureaucrats conspired in secret to rob their savings accounts to pay for the country's bailout.

While the measure still needs final approval from the parliament in Cyprus, the cat is out of the bag. Regardless of whether it passes, the Cyprus case illustrates that raiding savings deposits, which were once thought of as off limits, is an option that is very much on the table for desperate Western governments.

“As it is a contribution to the financial stability of Cyprus, it seems just to ask for a contribution of all deposit holders,” the Dutch finance minister told reporters.

Only they didn't ask. They just took, without permission, with no warning, and amid secret discussions.

In Orwellian-tinged language, EU bureaucrats called it “an upfront one-off stability levy.” Instead of using newspeak and euphemisms, how about we just call it what it really is: stealing.

Stealing: taking (the property of another or others) without permission or right, especially secretly or by force.

By hook or by crook, desperate governments will grab anything within their reach when they want to. They are not constrained by the laws that apply to the average citizen, or any sort of ethical considerations. They are only limited by “what they can get away with.”

Here are some reactions from justifiably angry Cypriots:

“They call Sicily the island of the mafia. It's not Sicily, it's Cyprus. This is theft, pure and simple” said a pensioner.

“I'm extremely angry. I worked years and years to get it together and now I am losing it on the say-so of the Dutch and the Germans,” said a British-Cypriot.

“This is like stealing, I feel rage,” said a Nicosia artist. “I earned this money and now it is taken to cover for some mistakes that are not my fault.”

Digital cash and digital accounting entries on the books of financial institutions are perhaps the easiest form of wealth to confiscate. It can all be done with a few strokes on the keyboard. This is another reason why governments around the world are waging a war against physical cash and forcing us to use digital cash more and more.

Like most other instances of capital controls and blatant wealth confiscation, these measures came as a surprise, and in a way that would make it difficult for someone to protect themselves after the fact.

Banks are closed in Cyprus during the three-day holiday weekend. ATM machines are reportedly out of cash, and the government has made it nearly impossible to wire money out of the country.

Of course, if you have any exposure to a desperate government, the time to act is before they implement measures like this.

This incident in Cyprus is a natural reaction of a desperate government and is to be expected…and prepared for.

Readers of International Man who are familiar with how to internationalize and insulate themselves from political risk should not be surprised by such an event.

The fact is, capital controls and outright wealth-confiscation can happen in any country that is desperate enough. This most certainly includes the US and most countries in the West. Fortunately it is possible to limit or completely remove your exposure to this risk through internationalization.

It is imperative that you move at least some of your savings into something that is not easy for a desperate government to seize at the drop of a hat. And do so before it is too late.

Physical gold in your possession and immediate reach, as well as some in a safe foreign jurisdiction is one way. Foreign real estate and financial accounts in safe jurisdictions are other options.

I wouldn't take the word of the bureaucrats that this is only a “one-off” event, especially if I had savings in other desperate EU countries like Spain, Italy, Greece, or Portugal.

Sign-up here to join the International Man community for free, and get the IM Communiqué delivered to your inbox. If you do, you will have the most actionable and timely information you need to internationalize your savings, yourself, and your income.

Become internationalized and not fully dependent on any one government. Then you can sleep well at night knowing that you will not wake up to the same surprise as the people of Cyprus did last Saturday.