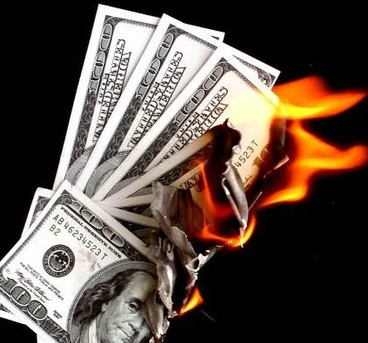 The end of fiat currency isn’t happening today. It probably won’t be tomorrow. But at some point it’s gonna be curtains for all these worthless little pieces of paper governments around the world have forced people to use as money.

That day might have been much further in the future before bitcoin exposed the fact that the emperor has no clothes. Bitcoin showed the world something gold bugs have known all along: it’s untrue that it takes a government to circulate a viable currency. Not only that…

There is a market for non-government-issued currencies that can’t be inflated away at the whim of greedy politicians.

The speed at which bitcoin was adopted around the world is quite a testament to this. The fact that it’s become thousands of times more valuable than US dollars is proof positive that people everywhere know that government-issued currency units have no intrinsic value whatsoever. It shows that people know that governments will not protect the value of the funny money they are forced to use (and hence their savings as well).

Even more striking, it shows that people expect governments to do the opposite: destroy the value of their earnings and savings.

Of course, even small children in a banana republic know this, at least about their own country’s currency. What’s new is that people in first-world countries who have stubbornly refused to acknowledge this truth are now as much as admitting that their emperors have no clothes either.

And now people everywhere are letting themselves see the truth, acknowledge it, talk about it, and even laugh about it. The emperors of fiat currency won’t be able to stroll about much longer as though nothing is wrong.

Of course, they won’t go down without a fight. And the obvious way to fight cryptocurrencies is to co-opt them. This is why my friend Doug Casey predicts that the US government will issue some sort of “FedCoin”. That seemed like an outlandish claim a few years ago when Doug first made it, but it’s coming closer and closer to reality, with central bankers around the world warming to the idea.

Just recently, the IMF’s Christine Lagarde said central banks should do it. Why? “Lack of oversight” of non-government currencies.

Regulators say they just want to keep everyone safe from criminals who use cash and cryptocurrencies. But history tells us it’s about control. Government cannot tolerate competition—especially not competition that both shows the worthlessness of their own offerings as well as gives privacy to citizens. Just imagine how difficult it would be for governments to fund wasteful spending, unwanted boondoggles, and unpopular programs if taxes really were voluntary.

Imagine if governments, like other organizations, had to earn their keep… No, no—we can’t have that!

And think of all the other wonderful benefits to the emperors if they could not only co-opt cryptocurrencies, but outlaw cash and mandate adoption of their digital funny money:

The amount of information and control a mandatory, state-issued digital currency would give governments would be so complete, it would be the equivalent of the cameras and screens in every citizen’s rooms in George Orwell’s dystopian novel, 1984. Big Brother would be watching—everything.

Now, before bitcoin, I might have said the situation is hopeless. Not enough people today understand or care about liberty to fight for it, especially when it’s attacked in the name of the greater good, fighting crime, taxing the rich, or whatever is popular.

But since bitcoin exposed the emperors’ naked stupidity and duplicity, I harbor some hope that people would resist attempts to fashion new clothes out of new lies.

If not that, there’s some hope that the many hackers out there would sabotage, subvert, or neutralize government attempts to seize total control in this way.

And if that fails, Adam Smith’s invisible hand (the market itself) will respond. The greater the state control of the economy, the less efficient, and the more pressure there is for capital to squeeze out of it and find a more efficient path to flow along.

FedCoin, EuroCoin, IMFcoin, UNcoin—should such things be created, that could be the very turn of history that pushes the world back into using real, physical, valuable, anonymous money: gold and silver.

I could also see people adopting private systems for tracking and trading other valuable things—barter made practical again by the information age.

I can imagine many things, but I have no crystal ball, so I can’t predict exactly how this will all play out.

Still, it’s clear to me that with people around the world using cash less and less, and governments long having hated the anonymity cash provides, the days of paper money are numbered. I do think some sort of government digital currency experiment is inevitable, if not imminent. And then things could get really… interesting.

Whatever does or does not happen, I see allocating significant long-term savings to real assets of tangible value as an absolute must.

Given the rising threat from all those naked emperors out there, internationalization of one’s assets and life, even to a limited degree, is a no-brainer.

Beyond that, it gets speculative. But that’s what I specialize in, in The Independent Speculator.

Whatever else anyone does, I do encourage all to think about these issues.

This is not science fiction. The technology exists now. And I’m sure the laws are already being drafted.

We’re not looking at eventual possibilities decades from now; we’re faced with serious threats in the years just ahead.