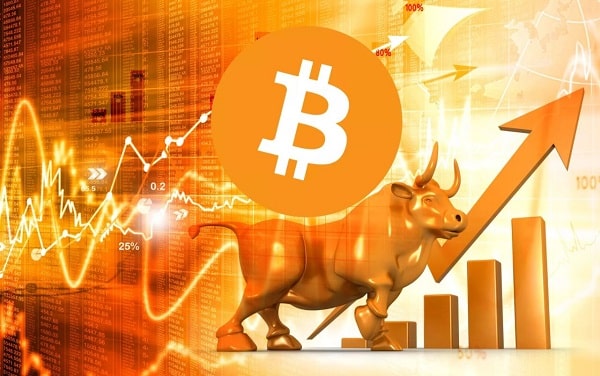 Marco Wutzer is a pioneering cryptocurrency investor and a true expert in this field. He’s also a longtime friend of Doug Casey.

Marco stays on top of the space better than anyone else we know. Doug Casey personally counts on him to direct his capital to the right places in the crypto markets.

Marco thinks cryptocurrencies will have profound effects on society and trigger a “Second Renaissance.” He also thinks getting in now on the right projects could deliver life-changing profits.

You’ll find the details in our discussion below.

International Man: We’ve seen a cycle of parabolic gains and then 80% crashes numerous times in crypto’s short history. What does this volatility mean for speculators?

Bull markets are born in disbelief, climb a wall of worry, and enter an optimism phase before climaxing in euphoria.

This first half of the cycle describes the bitcoin market in 2017: 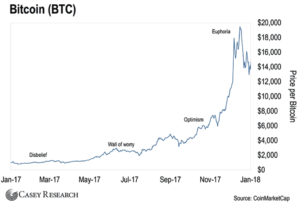 The second half of the cycle, when an asset first starts to drop, is met with complacency. This is followed by anxiety, denial, panic, and finally, capitulation.

This second half of the cycle describes the market in 2018: 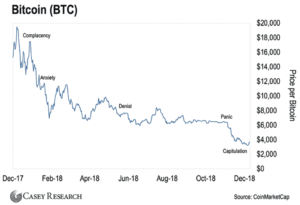 A real speculator always thinks for himself and acts with conviction upon his beliefs. In the capitulation phase you can observe the biggest difference between amateurs and professionals.

While amateurs dump their holdings in panic, smart speculators are happily buying and increasing their positions.

It is impossible to tell the exact length of a market cycle or the exact top or bottom. However, it’s fairly easy to see approximately where we are in the overall market cycle.

The capitulation phase is clearly over and bitcoin is rising again. So far this has not resulted in much mainstream attention.

We are still in the disbelief stage, and I don’t think this will change much until we pass the old-time high of $20,000 from December 2017.

But the masses always show up late to the game, and we have now entered a new bull market. 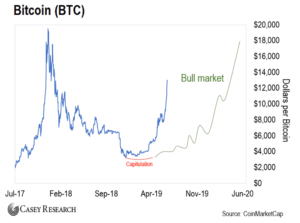 Blockchain technology and cryptocurrencies are in a secular bull market that has just begun to get traction. Overall, the market is still tiny and the technology still in its infancy.

What we have seen in 2018 is just a correction. The bullish long-term trend that will lead us into a Second Renaissance in the 2020s is still intact.

Remember, bitcoin went from $0.03 to thousands of dollars and has been through this cycle many times.

As long as you keep buying the leading projects like the ones I cover in my Disruptive Profits advisory—and as long as you have a long-term view—spectacular profits in the future are almost guaranteed.

Rest assured; the Blockchain Ecosystem is not going anywhere!

International Man: Facebook has recently released details about its cryptocurrency, the libra. What makes libra different from government fiat money or other centralized cryptos like ripple? How does it compare to bitcoin?

Marco Wutzer: Your question shows a good understanding of what Facebook’s libra currency really is: a competitor to fiat currencies first and foremost.

The main difference is that libra is backed by a basket of currencies and doesn’t represent just one.

The premise of cryptocurrencies is that they are immutable and decentralized with no single entity in control. Bitcoin and other permissionless, censorship-resistant cryptocurrencies stand for true financial sovereignty.

Libra is the opposite.

Libra is not immutable. Facebook can change the rules on a whim.

Let’s not forget that the foundation of Mark Zuckerberg’s business is being unethical while legally trying to get away with it. He put that into practice when he stole the concept and early work of the Winklevoss twins.

Facebook is also one of the absolute worst offenders when it comes to censorship.

But it gets even worse.

The libra wallet is designed to monitor all your transactions and block “suspicious behavior.”

Facebook has shown time and time again that it has absolutely zero regard for its users and is interested only in increasing its own power and profits.

Do you really want to entrust your money to a corrupt company like Facebook and its big corporate partners?

Libra can never be a real competitor to peer-to-peer money like bitcoin.

International Man: There is a lot of attention given to blockchain technology in the use of money. Let’s talk about the broader-use cases for blockchain. What areas do you think aren’t getting as much attention they should? What will blockchain tech disrupt next?

Not only the entire financial system but any process that relies on a database with more than one user. If you really think about it, that applies to almost any business.

The distributed and immutable nature of blockchains has enormous advantages whenever multiple parties deal with each other. It doesn’t matter if we talk about money, supply chains of physical goods, or any kind of data.

Social media and communication platforms can become censorship-resistant and have much better privacy thanks to blockchain technology.

Everything becomes more efficient and cheaper, and middlemen will disappear.

There are so many benefits and so many industries will be disrupted that I could fill an entire book.

The important thing to realize is this: The Blockchain Ecosystem is rising. Nobody can prevent that. With more development and adoption, this ecosystem gets exponentially more powerful.

But we still need a few more years to reach critical mass.

Look at the internet. It has been around for 40 years or so. But it really took off with everyone using it in only the last 10 years or so.

The Blockchain Ecosystem is now 10 years old. I think it will take another 3–5 years before it becomes so powerful that disruption starts to happen on a massive scale.

Most people cannot even begin to imagine what paradigm shift will be coming soon.

In fact, I believe it will lead us into a Second Renaissance.

We’ll see an epic boom in entrepreneurial activity, scientific development, and an explosion of creativity. Unlike almost anything else in humanity’s history until now.

And the best part is it’s still early. You have the chance to invest in the blockchains and protocols that will power large parts of the world economy in the future. And you can do so now while the valuations are still tiny.

International Man: Will the next crypto bull market act like a tide that raises all ships like it did last time, or will it be different? Who will be the winners and losers?

Marco Wutzer: I think it will be very different.

The bear market has already cleaned out a lot of crappy projects. They have either run out of money or the funds have been misappropriated.

I don’t think the ICO [initial coin offering] boom will come back either—at least not to the extent we saw in 2017.

One reason is that the legal framework is much more complicated and it’s no longer easy to raise a lot of money on the cheap.

But also a lot of smart entrepreneurs and developers are already involved in the Blockchain Ecosystem. Many existing projects have already had a head start with a few years of development. Newcomers will find it extremely difficult to compete.

I think we’re going to see high-quality projects take off to new all-time highs. Some small projects that develop important technologies will move into the limelight.

And a lot of the copycat projects that deliver no value or have flawed technology will simply disappear.

On the other hand, there are also many bad projects with really good marketing. It’s a minefield for investors without expert guidance.

International Man: How is the Blockchain Ecosystem evolving? What blockchain-based areas do you believe have the potential to skyrocket?

Marco Wutzer: Bitcoin has already made a big move from the bottom and is very dominant at the moment.

That’s normal because it’s the most liquid crypto asset and a lot of new money moves into bitcoin first.

Nobody can compete with bitcoin as a borderless store-of-value at the moment. But the Blockchain Ecosystem is about a lot more than that.

I think the biggest money to be made is in smaller projects that develop crucial technologies for the Blockchain Ecosystem.

This is where smart speculators find the best profit opportunities in this explosive asset class and truly life-changing money can be made.

Editor’s Note: We don’t know if we’ll see 10,000-to-1 returns as happened previously in crypto. But it’s pretty clear to us this is a revolutionary area. And there are bound to be lots of crypto plays that go up many, many times in value in the coming years.

Marco stays on top of the space better than anyone else we know. Doug Casey personally counts on him to direct his capital to the right places in the crypto markets.

Marco just released a new exclusive video on what he thinks is the most compelling crypto play right now. With the new crypto bull market taking off quickly, the situation is truly urgent. Click here to watch it now.