It’s the least-connected country on planet earth. Only 6% of the population has a mobile phone, and fewer than 1% has Internet access—the lowest rates in the entire world.

This country also ranks worst in the world in terms of press freedom. It does not have a stock market, and the state owns all financial institutions.

This country is Eritrea. It has been dubbed the “North Korea of Africa.”

Eritrea is also infamously distinguished for its oppressive tax system. It’s the only country in the world—other than the US—to tax its nonresident citizens on their global income. More on that here.

As someone who likes to go to countries most others wouldn’t, Eritrea stirs my curiosity.

It’s rare to find someone who has traveled to Eritrea, which is why I’m pleased to have had the chance to speak with my colleague Louis James about his recent trip there. Louis was scoping out mining companies for Casey International Speculator, the most authoritative investment publication for junior gold/silver mining companies.

You’ll find our interesting conversation below.

Nick Giambruno: So where is Eritrea?

Louis James: Eritrea is a little country on the east side of Africa… the northeast side along, the Red Sea. Eritrea and Ethiopia were once part of a larger country until they split. Eritrea got the coast, and Ethiopia got the rest of the land and a lot of the resources, including hydropower. Neither side is really is happy with what the other got, and there’s always a potential for conflict there. But there’s also a potential for cooperation, and that could lead to lots of interesting opportunities.

There are no direct flights to Eritrea from most other places in Africa. You fly through Europe; that’s how I connected. Eritrea was colonized by the Italians pre-World War II, and there’s still a strong Italian influence. 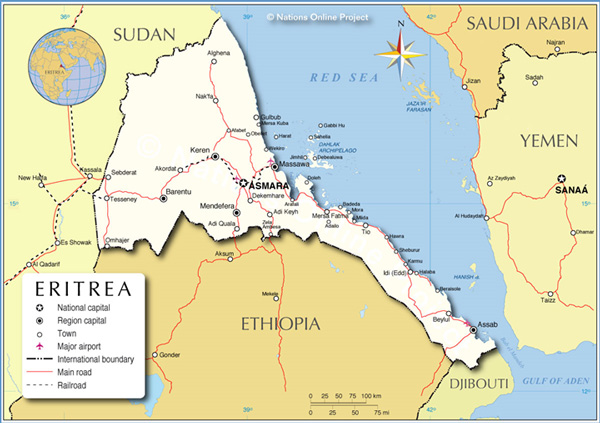 Louis: It is without a doubt one of the poorest places I have ever been to—and I travel quite a bit, so that’s saying something. And yet, Eritrea has a very rich mineral endowment, which is why I was there. It appears to me that the place is so close to the bottom, it has almost no place to go but up. Of course, never say never. Things can always get worse if people put their minds to it. But despite the poverty, Eritrea has mineral wealth, and I see opportunities not just in mining but of all sorts there for those with nerves of steel.

Louis: The critical thing to understand about Eritrea is its so-called “national service,” which came from an emergency decree during the war with Ethiopia and never went away. Essentially, this allows the government to conscript anybody for any job it deems fit. Originally the idea was military, of course, in support of the war effort. Today, it’s not just conscription into the army; the government appoints people to jobs at set wages throughout the whole economy. This impacts everything and everyone, as it applies to all men and women from the ages of 18 to 40. The whole workforce is largely under the command of the central government, which like so many other governments, doesn’t know what it’s doing. It’s completely dysfunctional, and people are fleeing when they can. Since this has been every bit as disastrous as you’d imagine, there are very few real jobs, prompting the system’s supporters to argue that if they end national service, no one will have any jobs.

Eritrea is the most centralized command and control economy I have ever been to, including places like Belarus, which still operates as though part of the Soviet Union.

But this just shows the sort of “zero sum game” mentality socialists often fall prey to. They don’t understand that if they would just free these people, they would find and create work. They all have needs and will pay each other to meet them. If the Eritrean market were freed, many useless jobs would disappear, but those that remained and those that would be created would pay something worth earning.

Instead what you have now is essentially slave labor. The incentive of a slave is never to maximize productivity; it’s never to do the best job possible. A slave’s incentive has always been to do the minimal amount of work necessary to avoid the lash. You didn’t love your masters… you didn’t try to benefit them. You just didn’t want to get whipped. And that’s Eritrea’s economy in a nutshell today.

Nick: And that’s the opportunity?

Louis: Yes. You see, even at the best hotel in the country, you get slow, lethargic service. Waiters don’t care if your glass is empty. They’re going to get paid the same anyway, so why bother trying? The situation is so screwed up, almost anyone could go there and build a better mousetrap. Doug Casey says that if he was young, he would go to Africa to seek his fortune. I think if I were going to follow Doug’s advice, Eritrea might be the first place I’d try.

Make no mistake: I’m not saying Eritrea is any sort of investor’s paradise. I’m saying it’s a place where piles of money could be made by those daring enough, because from a very low starting point, even a modest improvement can bring an order of magnitude of return. If your economy is chugging along at the same rate as the United States or China, it’s hard to double that economy. That’s what makes Eritrea interesting for the financial swashbucklers among us.

Nick: An interesting fact about Eritrea is that it and the US are the only countries in the world that impose an inescapable system of global taxation on their citizens no matter where they reside in the world. Would you say the US is in good company with Eritrea with this policy?

Louis: You bring up a really poignant point. Between this and the national service, the result is that many Eritreans flee the country illegally. Ethically speaking, there is no difference between the US and Eritrea on this issue. They both claim the same absurd taxation right. The big difference between Eritrea’s tax regime and the US tax regime is that Eritrea is largely powerless to do anything about its people who leave the country, whereas the long arm of the IRS is global, and there’s nowhere that Americans can go where the IRS will leave them alone—except for a few places like Puerto Rico, where I live, of course.

Louis: I just completed my first year living in Puerto Rico, and I’m loving it here. It’s not just about my earned income, but it’s also capital gains tax. The government gave me a 20-year, 100% capital gains tax holiday. Given my investment focus in precious metals and mining, which appear to have bottomed, I think this will work out very, very well for me.

Nick: Okay, thanks for the update. Anything else on Eritrea?

Louis: Despite all the difficulties I’ve mentioned, it really is a beautiful country, with bright, friendly, welcoming people. Because of the difficulties, it’s also a land of opportunity. As the old guards in both Eritrea and Ethiopia give way to younger blood, I think a rapprochement is natural and likely. This will be a great economic boon to both countries, as Eritrea is basically a wood-fired economy at present and Ethiopia has power to spare, while Ethiopia is landlocked, and Eritrea has a developed deepwater port it’s not really using. When the stars align, things for both countries could improve dramatically and quickly.

Nick: Got it. Thanks for talking with us.

Editor’s Note: If you want to find out more about taking advantage of Puerto Rico’s tax benefits, I’d suggest you check out our groundbreaking guide on the topic.