The government has criminalized so many mundane activities that the average American unknowingly commits three felonies a day. That’s according to a study by Harry Silverglate, a civil liberties lawyer.

This happens, in part, because there are plenty of awful laws most Americans have never even heard of. One of the worst of these little-known laws is the Foreign Account Tax Compliance Act (FATCA).

FATCA is a U.S. law that forces every financial institution in the world to give the IRS information about its American clients.

Complying with FATCA is a huge financial and administrative burden, measured in hundreds of billions of dollars. It’s a paper shufflers dream come true.

FATCA also highlights something important. As history has shown, a government’s destructive measures usually follow a certain progression. The steps it takes as it becomes increasingly desperate are detailed in the graphic below.

FATCA helps reveal how far along the U.S. is at the moment. 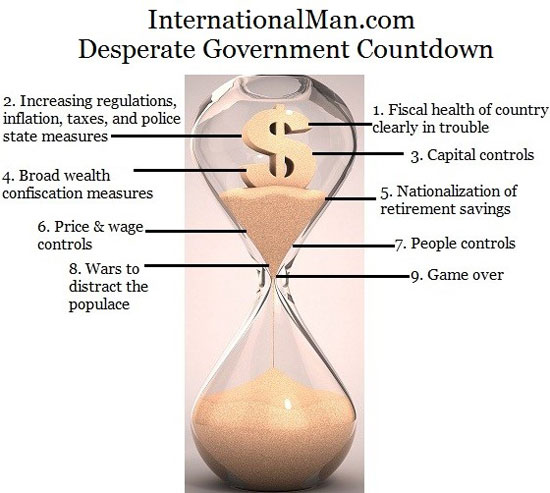 This is the general pattern nations follow as their fiscal situations deteriorate. Understanding it can help you take practical steps to protect yourself.

2. Increasing regulations, inflation, taxes, and police state measures. The sheer amount of current and future U.S. government spending, coupled with disinterest in making any meaningful cuts, means that higher taxes and inflation are a mathematical certainty.

Thanks to a veritable mountain of rules, laws, regulations, and the ramping up of the War on Cash, the government can already essentially track and control every penny you earn, save, and spend.

Last, and most terrifying, are the near daily stories and YouTube videos illustrating a metastasizing police state.

3. Capital controls. Think of the government as a thief trying to steal your wallet as you (understandably) try to run away. With capital controls, the thief is trying to block all the exits so you can’t reach safe ground.

A government only uses capital controls when it’s desperate… when it can no longer borrow, inflate the currency, tax, or steal money in one of the “normal” ways.

In most cases, governments use capital controls in severe crises. Think financial and banking collapses, wars, or chronic economic problems. In other cases, they’re just a way to control people. It’s much more difficult to leave a country when you can’t take your money with you.

Regardless of the initial catalyst, capital controls help a government trap money within its borders. This way, it has more money to confiscate.

4. Broad wealth confiscation measures. After capital controls, governments often use a wide range of tactics to confiscate wealth. No matter the method, or what they call it, the net effect is always the same: The government grabs as much capital as it can.

These tactics might include official currency devaluation, an attack on precious metals (windfall profits tax, confiscation, nationalization), and government sanctioned theft of electronically held money, including bank and brokerage accounts (like the bail-in that happened in Cyprus a few years ago).

5. Nationalization of retirement savings. It's no secret that retirement accounts are a juicy target for any desperate government. The most common way to nationalize these accounts is to convert their assets into so-called “safer” government bonds. As with most government measures, this is sold as “for your own good.”

We are already hearing whispers from the U.S. government about helping to “manage” retirement savings. This is code for converting retirement investments into U.S. treasuries.

6. Price and wage controls. It doesn't take a genius to see that price controls cause shortages—usually in food, energy, and basic necessities.

7. People controls. Restricting the movement of citizens is another tool in the desperate government's toolkit. Wealthy citizens are particularly worth trapping.

9. Game over. Failed wars usually provide fertile soil for severe civil unrest, revolution, and the potential emergence of a strongman at the helm.

The good news for Americans is that there’s still time.

While you can still avoid getting boxed in, no one knows exactly how much time you have. Once a government implements official capital controls, your money is trapped, and things tend to unravel pretty quickly.

Developing a game plan now does not mean you have to immediately leave your home country. By opening a foreign bank or brokerage account remotely, it’s possible to achieve a certain level of political diversification without even leaving your living room.

This is the first step to immunizing yourself against the destructive measures a desperate government will eventually take. And it’s absolutely crucial.

New York Times best-selling author Doug Casey has said over and over that spreading your political risk beyond one single jurisdiction is the single most important thing he can recommend. I wholeheartedly agree.

Doug has been to over 145 countries and has invested in a number of them. Doug recently recorded a video where he discusses his favorite countries and strategies. It’s a must-watch given the huge economic and political risks facing the world today. Click here to watch the video now.