Nick Giambruno’s Note: There’s a commodity that has more upside and less downside than any other right now. Regular readers know what I’m talking about. But if you’re new to the story, I encourage you to read today’s interview closely…

It comes from Inner Circle editor Chris Lowe and investing legend Rick Rule. As I told you on Wednesday, Rick has been financing mining and energy companies for nearly 40 years. And he’s been particularly active in the junior resource world, which some say he rules with his checkbook.

As a contrarian, Rick looks for oversold and under-loved markets most investors have turned their backs on. Below, he shares what that is right now…

Chris Lowe (CL): In the first part of our conversation, we talked about why we’re still in the early innings of a commodities bull market. We also talked about why you particularly like precious metals right now. What other specific opportunities do you see right now in the commodities sector?

Rick Rule (RR): I’m also bullish on uranium. The last uranium bull market was at the start of the last decade. And it was the most spectacular financial event of my life. I made more money in an absolute sense, and in a percentage sense, than in any other circumstances I have ever experienced. And I made it faster than ever before or since.

The uranium price rose by $128 per pound over the last bull market. And some of the junior miners rose more than 1,000%. 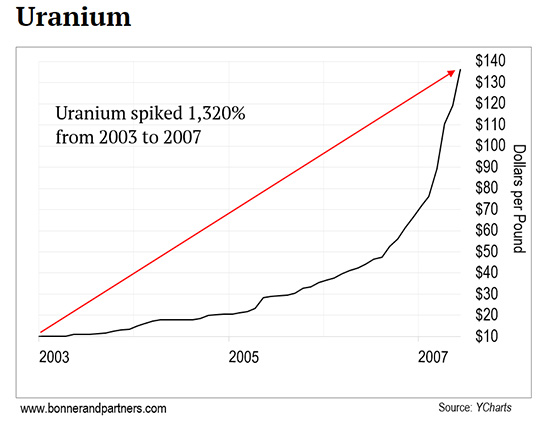 As was the case before the last bull market, the uranium business today is a horrible, horrible business. The International Energy Agency estimates that, on a worldwide basis, it costs $60 to produce a pound of uranium. The same pound of uranium sells for around $20.

More than 31 countries rely on nuclear power for part of their electricity needs. And another 45 are considering adding nuclear to their power-generating mix. That means there are only two choices. Either we use uranium on a continuing basis… or the lights go out. And if we’re going to use uranium on a continuing basis, the price has to go back to the cost of production.

To most people, the uranium business is a horrible business… because an investment in a company that loses $40 for every pound produced is horrific. But to a contrarian, the fact that either the uranium price triples or the lights go out is a sterling opportunity.

CL: For folks unfamiliar with the uranium market, what makes it unique as a commodity?

RR: Uranium is the densest energy source known to man. And the uranium market is driven by this unparalleled utility. At the same time, it’s a market that’s driven by intense emotion. If you recommend investing in uranium to some investors – in fact, to many investors – the first thing that comes to their minds is not watts or volts but Hiroshima, Nagasaki, Three Mile Island, and Fukushima Daiichi.

CL: What else makes uranium attractive to you as an investment?

RR: It’s important to understand that uranium costs often make up just 2% or 3% of the operating budget of a nuclear power plant.

People talk about how commodities prices have to go up to sustain the capital necessary to get them out of the ground and into production. But you have to look at the other side of the equation, too. Can the consumer afford to pay the higher price? With uranium, the answer is most definitely yes.

CL: What are the big demand drivers for uranium?

RR: The important countries with regards to increasing uranium demand are Japan, China, Korea, Taiwan, and the United Arab Emirates. But the most important of those is Japan, where the energy density of uranium is of the utmost importance.

The Japanese have a national political policy of energy security. This goes back to the trauma that they suffered during the Arab oil embargo of 1973. It was extremely dislocating for the Japanese economy because the country imports all of its energy. As a consequence of that trauma, the Japanese chose to rely on highly efficient energy sources. And there is no commodity as efficient as uranium.

CL: Nuclear power has been in the crosshairs of environmentalists for a long time. How does this affect your investment thesis?

RR: It depends on how honest one wants to be with oneself.

One shouldn’t confuse power generation with nuclear war. They’re different topics. But it’s absolutely true that if something goes wrong with a nuclear power plant, it goes really, really wrong. We saw that with the Chernobyl disaster in Ukraine in 1986 and the Fukushima Daiichi disaster in Japan in 2011.

But things can go really right with nuclear power, too. For instance, there has never been a fatality involving nuclear power in the U.S. That’s something that can’t be claimed by any other source of fuel – including wind and solar.

The other thing that mitigates in uranium’s favor from an environmental viewpoint is that most renewable energy sources are intermittent or inefficient as base load power.

[The base load is the minimum level of demand on an electrical grid over a span of time. Base load power sources are power stations that can economically generate the power needed to satisfy this minimum demand.]

Of all the base load types of power, nuclear emits the least carbon. In terms of reliable, cheap, 24/7, carbon-free power, the consumer’s choice is uranium, uranium, or uranium.

RR: Right now, there is a surplus of uranium. It’s a consequence of times when there were very high margins to be had on production. It’s also as a consequence of the prudent idea to take some of the weapons-grade uranium that threatened the existence of mankind, downblend it, and use it for running lights or recording interviews.

But as I mentioned earlier, producing a pound of uranium for $60 and selling it for $20 means the industry is in liquidation. At some point, you can’t continue to earn minus 67% operating margins.

If you combine that with the price of uranium being almost irrelevant as a function of the cost of producing electricity, that means the price of uranium must go up… and it can go up. In my experience, if something must happen and can happen, it will happen. And that’s precisely what happened in the last bull market.

CL: What kind of time horizon do you have for a rebound in the uranium market?

RR: In the last cycle, from the time I had this realization to the time I got paid took five years. And those five years were very painful. I was rewarded for my genius with a steep decline in the share prices of the junior uranium miners I bought to implement my strategy… until I was right.

If my memory serves me well, of the five junior uranium miners I owned at the bottom of the last cycle, the worst performer gained 2,100%. Will past be prologue in that regard? I don’t think so. But if you cut my returns in half, I would still be delighted. And I suspect that’s likely.

CL: What catalyst do you see for higher prices?

RR: The lowest-cost producers are, of course, the state-assisted producers. And they’re still producing at the margins we just discussed. But you can only go on losing money like that for a limited time. We are involved in a last-man-standing contest right now. That contest will eventually resolve itself when the last of these low-cost producers hits the “off” button on the production line.

The last time that happened, the price of uranium spiked from $8 to $130 a pound before settling at $85 a pound – a price that gave the industry very good margins.

CL: What accounted for those surging margins?

RR: Turning on a mine – in particular, a uranium mine – after you’ve shuttered production is difficult. It’s not like turning on a toaster or a microwave oven. So once producers finally throw in the towel, supply dries up.

For instance, a normal mine might take 10 to 12 years from conception to first pour. But we’ve seen some uranium mines – the Cigar Lake Mine in the Athabasca Basin in Canada is an example – take 30 years.

CL: With that in mind, how do readers profit from this setup?

RR: The easiest option – and the right one for someone who is more interested in safety of principal than a maximum rate of return – is to buy a trust that owns physical uranium.

This is probably the lowest-risk way of playing the setup right now in the uranium market. I’ve said it before. But if you believe the price of the commodity is going to go up, you start by buying the commodity.

CL: What will be the signals that the uranium market is turning higher?

RR: Keep an eye on Japanese nuclear power plants restarting. The uranium market was in balance – although probably headed lower because the operating margins were so high – prior to the Fukushima Daiichi disaster there in March 2011.

The shuttering of that plant directly took away 16 to 18 million pounds of annual demand in a 190-million-pound market. In other words, it obliterated 10% to 12% of demand. If the Japanese nuclear industry is able to convince the Japanese people of the efficacy of nuclear power in Japan, that demand will come back on stream.

In conjunction with the fact that China has 20 new nuclear power plants under construction, this will restore the market to a healthy balance between supply and demand… and raise the price of uranium from its current $20 level to a market-clearing price more like $60.

That makes even a simple investment in the physical commodity a potential triple from today’s prices.